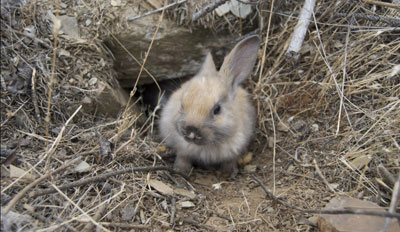 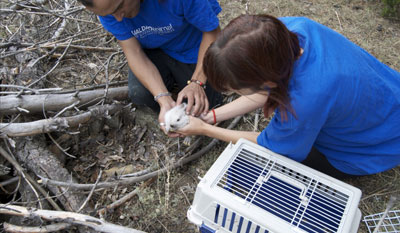 http://www.igualdadanimal.org
click here for a gallery of photos from the rescue:

"The Animal Equality Open Rescue Team has rescued 31 rabbits from a farm located in the center of Spain. These rabbits were kept in cages just over a meter long, prisoners from the time they were born, they awaited the day the owner of the farm would kill them. The night before the rescue, the Investigation and Open Rescue Animal Equality Team had seen them at one of our investigations in a semi-extended farm dedicated to raising pigs. That night we were unable to rescue these animals, but promised to return.

At around two o'clock the next night, eight activists of Animal Equality (Sun, Edgar, Ivan Yahira Jose, Esther, Sharon and Eu) went back to the farm and jumped over a fence without having to use any type of force. Once inside, we opened the doors of their cells and proceeded to rescue them. We put them inside the plastic boxes we would later use to carry them to the van, parked about a kilometer away from the farm. Once we emptied the cages, all the activists took the animals away from that place quickly, with the satisfaction of thinking that the owner of the farm would find all his cages completely empty.

Despite our care and attention, unfortunately one of the youngest rabbits died that same night without us being able to do anything to prevent it. Though we were very sad due to this incident, we believe that at least it happened while he was in the company of the rest of his family and away from the dirty place where he had lived so far. At least he was able to experience and enjoy new sensations and his death was not part of an unfair animal exploiation system.

The morning after the rescue, and after making sure the rest of the rabbits were ok, we took them to a place not frequented by humans, where we had prepared three burrows with a large network of tunnels so they could enjoy their new lives. Slowly and with care, we took them one by one out of the boxes and placed them into their new homes, a place where they could really start to live their lives. Just after a few minutes, it seemed that the little ones had got used to their new burrows and hid in them. Other rabbits began to jump around feeling for the first time the fresh grass of their new and safe surroundings. At last, they could dig into the ground, hide behind bushes or sunbathe.

These animals can now live without being regarded as anyone's else property, without being deprived of freedom while having a pending death sentence on them. They own their lives, as they should have from the time they were born.

This is the fourth open rescue carried out by our organization after rescuing six baby pigs in August 2007 from an intensive pig farm for meat consumption, in July 2008 we rescued four minks from a pelt farm, and in December we rescued 10 hens from an egg farm in the centre of Spain, where they were exploited for their eggs.

Two thousand and eight has been a very important year for Animal Equality in which we have done a great amount of innovative actions. Three hundred and sixty-five days of experiences with other colleagues that will undoubtedly serve us in this new year to help more animals in a better way.

This year two thousand and eight finishes with 45 animals rescued by Animal Equality. Forty-five individuals -each unique and different- who now have a new life free of animal exploitation. Fifty-one free individuals -if we include Marion, Mark, Gracie, Barry, Jane and Blondie, the six pigs rescued in August 2007 by Animal Equality-. Perhaps these "figures" may seem insignificant when compared to the magnitude of the animal exploitation industry. The number of victims who end up in slaughterhouses, laboratories and vessels are millions each day. However, for each of these fifty-one animals we rescued these actions, have been a complete change in their lives. They have gone from being afraid and sentenced to death to enjoy their lives as they should have since the time they were born. We have undergone a certain risk carrying out these and other actions, but we think it is worth it: we won't die for rescuing them or speaking for them, but they themselves will die if we don't do everything possible that is in our hands.

We do not want to finish this year without saying, in reference to the open rescues, that we consider them to be an inextricable part of our identity. This is the reason why we have adopted a new slogan that reflects better our work for non-human animals: Educate, Investigate & Liberate. They are, in our view, three types of activism closely interrelated and complementary: Education as a way of freeing animals through the change of social consciousness. Investigating as a way of helping society discover the reality of animal exploitation. And finally, Liberating, which is to implement our wishes and words to help those individuals who are enslaved and suffering at the moment.

For this coming year 2009, we will try to save at least one animal every day, trying to save over the next year more than 365 individuals so that at least every day of the new year we will try to directly change the life of someone who needed it. It's part of our commitment and our desire to work for animals, and therefore try to multiply our efforts to help them. Please consider helping us in this task and by participating in our activities or, if you can by funding the activities we do. Animal Equality / Igualdad Animal is a non-profit organization that is funded by it's members,the sale of material and private donations. Inevitably, every action we do involves some costs (fuel for trips, purchase of equipment, veterinary fees, etc.). And therefore, any help on your part will be welcome and will help us move forward.

Last but not least, remember that animal exploitation is based on our everyday decisions: what we wear, what we eat or what shows we fund are vital decisions for the animals involved. It's in your hand to think about becoming vegan and not financing animal exploitation. This is the way in which each one of us can save animals every day."

"During the night to the 5th of january an action was carried
out against the fur shop Havgårds Päls in Malmö, Sweden.
The shutters, doors and walls were spraypainted.

One year has ended but our instincts of liberty have not, our desire to destroy this world and to see it in chaos by its own means have not been extinguished; the year 2008 came to an end but animal liberation by radical means continues on its course.

This time, at a market where a 'pet' shop was found, we cut a canvas that was serving as a wall near fish tanks, and we rescued 6 imprisoned fish from their 'beautiful and well decorated' prisons.

After the rescue, we continued the liberation at a beautiful lagoon, where the sky was painted by the setting sun for a special day for those imprisoned animals; the sun went down as the fish faded in the water and our silhouettes disappeared as the night slowly fell.

The animals are not served by your tears shed in front of photos of them mutilated and murdered; what interests them is to be rescued from the hell in which they live; shake the fear and take to the streets to make animal liberation a reality!

Postscript: If the abusers were thinking that the actions had only shaken last year and that it would be calm now, they can expect that we will get back in action!

It should come as no surprise that Elves sabotaged a RBS bank in the south west, gluing the doors closed in resistance to anthropocentric policies. This action was inspired by the ecoteur who shut down Kingsnorth power station, reducing UK climate change emissions by 2% and the eco-anarchist cell for direct attack.

For the collapse of civilization, the sabotage will continue.
- Earth Liberation Front"

21 - Stockholm; Fur shop Göran Larsson was attacked with spray paint. Two activists were arrested the same night; after a few weeks in police custody, they were convicted and fined.

2 - Göteborg; A central park in Göteborg (Eng: Gothenburg) keeps penguins, seals and other animals behind bars. On the night of november 2nd slogans were sprayed in the park. The same night Kajs (fur shop) was hit with red spray paint and the lock to the shop was destroyed. - DBF Göteborg

3 - Umeå; All locks on the restaurant Garaget were glued. - DBF

15 - Örebro; Mats Nylén, the owner of Örebros last fur shop had a home visit from DBF. 'Murderer' and 'DBF' was sprayed on the walls. - DBF

12 - Örebro; The car belonging to the owner of the fur shop Skinnmäster Mats Nylén was sabotaged.

"On January 1st we set fire to a phone booth of the disgusting Telmex company; the fire filled the booth and left it unusable.

This is a new year message to Telmex: We are going to burn you!

USA: Rod Coronado Has Been Released!