On Tuesday night of this week (06-01-2009), despite the temperature outside being minus figures, a room in Friends Meeting House, Cambridge was packed out by a couple of hundred people who wanted to hear another side of the story about the bombs being dropped on Gaza. Another side of a story that the media doesn't always tell, quite often preferring to portray things as 'a Palestinian problem'. 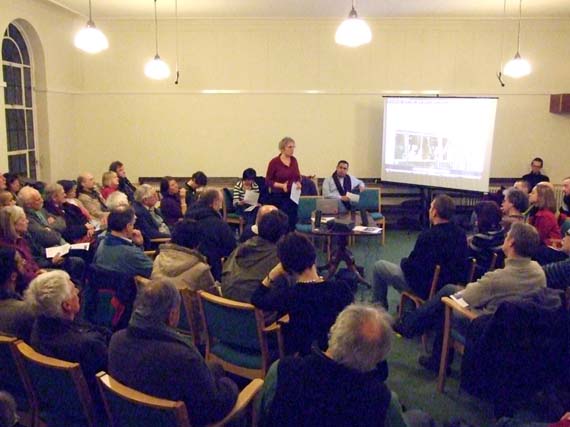 As part of this talk, there was a live link up with an activist currently living and working in Gaza itself. Due to technical shortcomings, at times it was difficult to make out what she was saying. One thing that was confirmed during this broken conversation was that the Israelis have closed all check points and borders in and out of Gaza, making it extremely difficult for anyone inside this zone to get food and supplies.

Since this meeting meeting, we have seen a token gesture by Israel (probably a vain attempt to save face in the eyes of the international community) to stop the military coercion and allow a few trucks through with supplies.

There was some discussion at the meeting about how some activists were not comfortable with the idea of Israeli flags being burned at national demos. However, there was no consensus on whether this was a good thing or not, just an implicit understading of why it happens, even if some people don't agree with it.

Other subjects discussed were the way the media has covered the story so far, and how in particular the BBC tends to show apparent bias against the Palestinians in their coverage.

Also promoted at this meeting were two actions to happen this Saturday.


1) Another Vigil/Demo in front of The Guildhall, Market Square in Cambridge THIS SATURDAY, starting at 12pm.


2) A National Demonstration in London.

Coaches for this leave from Victoria Avenue, next to Midsummer Common at 10am.
Return tickets are £5 unwaged or £10 waged and £15 solidarity.


If you really give a damn about your fellow inhabitants of this Earth, you'll see to it that you'll attend one of these events.