People came from far and near came, to hold their candles and share the cold and the sadness for others further away where electricity, water. food and ordinary daily needs are not being met because of savage oppression, killing, maimings and bombing.

Hanthala turned up, I reflect he was saddened and if you could have seen his face there were tears of blood - yet he held a bright candle with us - he holds a candle even now whilst many of us sleep he holds it high - hope happens in community never alone, alone we despair. 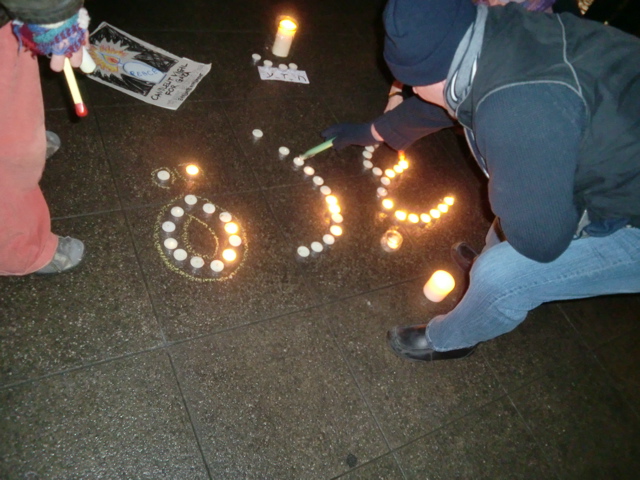 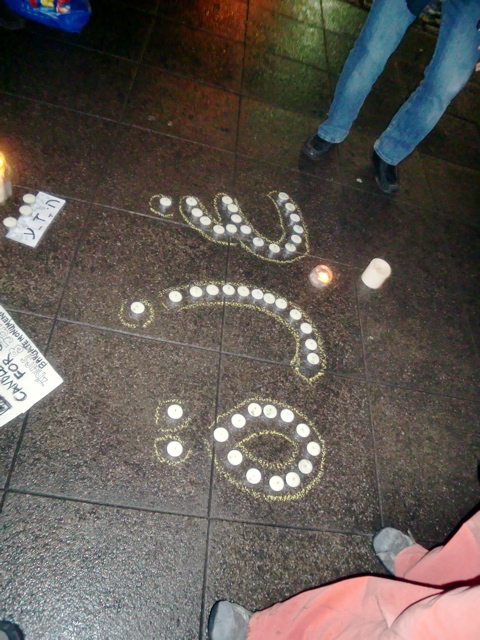 from above - candles flicker 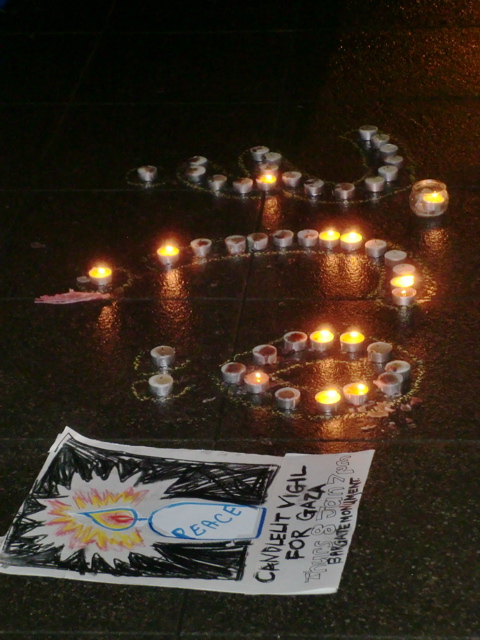 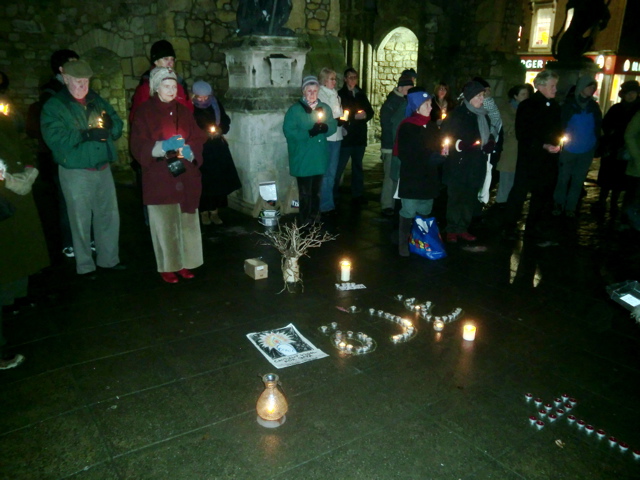 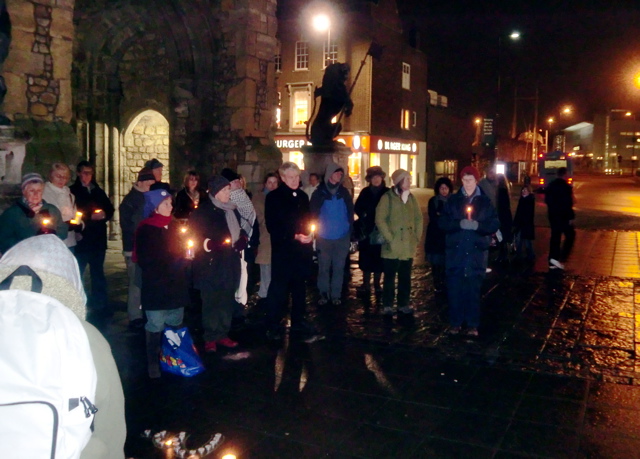 Near the Bargate - sharing the silence 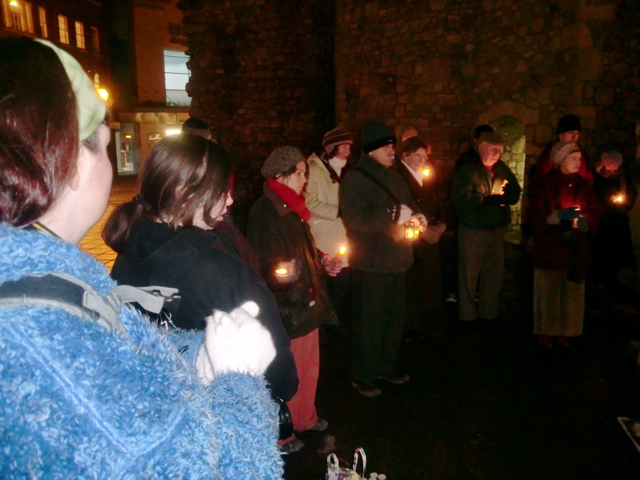 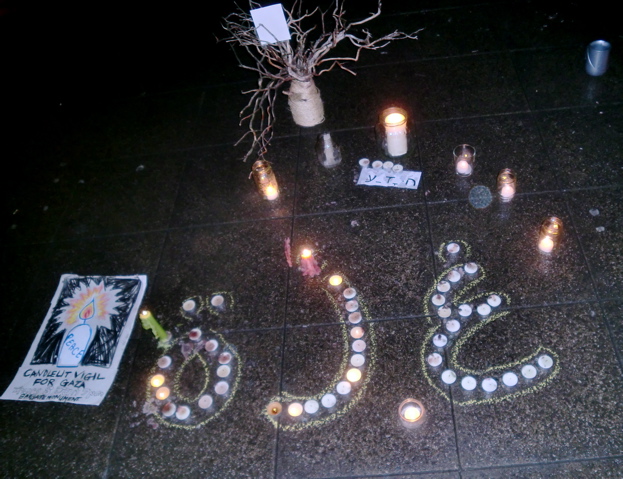 gaza in arabic and hebrew 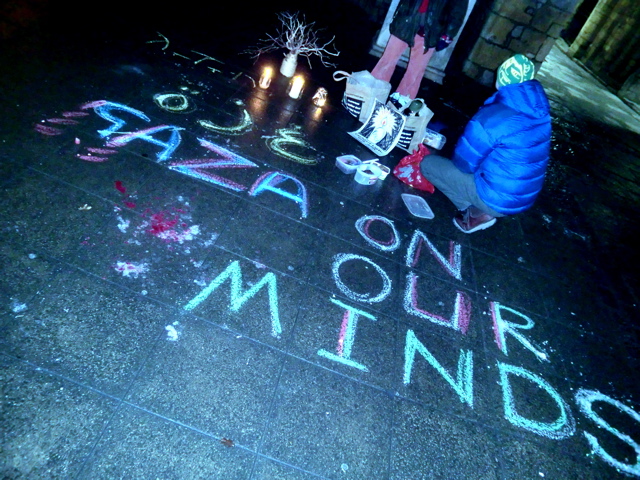 gaza on our minds 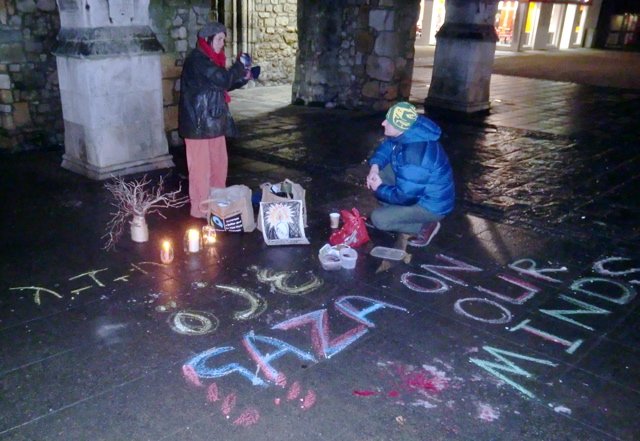 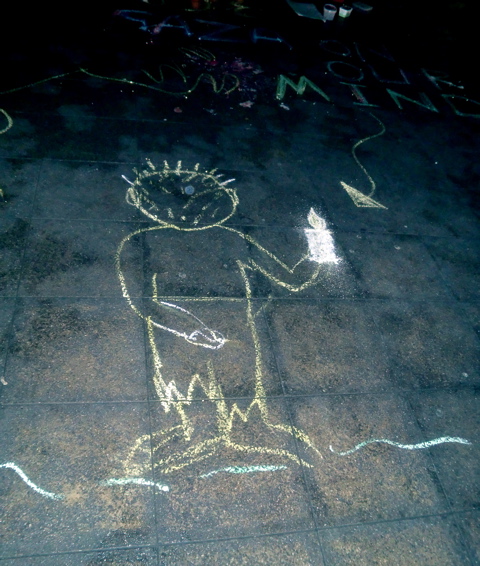 Hanthala turns up - candle in hand and tears in eyes 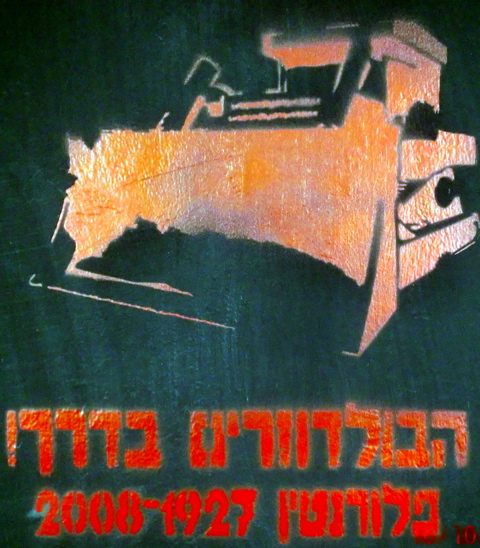 bulldozers coming to Valentin, Tel Aviv - to evict the poorest 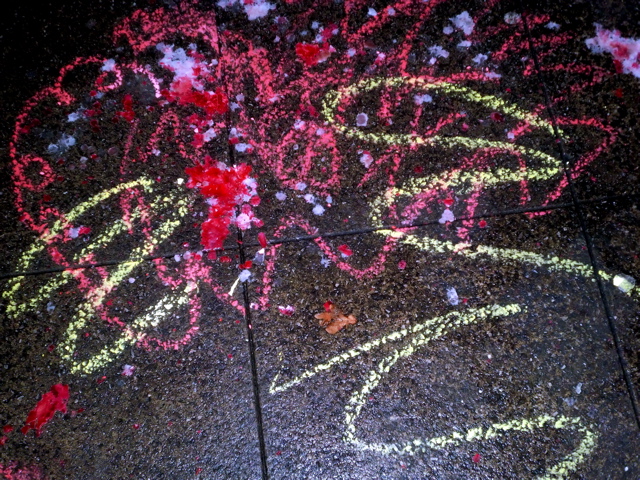 Other events happened in Southampton this night (dialogue/talks and planning by local Muslims for a peaceful demonstration) they each of them are but an expression of a particular concern Gaza, this is some reflection on one happening - the Southampton Candlelit vigil. If you were there - please respectfully post your own comments. Many people who attended made it happen - it was requested by JAI (Joint Advocacy Initiative of the East Jerusalem YMCA and the YWCA of Palestine).

The number of vigillers doesnt really matter does it? - I say no. Yet they came for three hours, they kept coming vigillers with candles and food to share with strangers - radical hospitality in the streets. Gaza was written in Arabic, Hebrew and English - however gratuitious creativity broke out after most people went on their way after 30 minutes of silence, tea, cakes, pastries and delicious homemade biscuits.

That people die now and suffer in great numbers in Gaza does matter, as deaths matter in Israel too. Many of the Israeli deaths in Israel are noncombatants in this war - an injured Israeli baby matters too.

Some biases matter - in regards to human rights its not just numbers - its occurrences in their differant forms - and numbers matter because they are multiples on one. Concern for human rights matters for all in this messy war - across the board. It has been said that if you are breathing there is more right with you then there could possibly be wrong - and yet there are some, so many in Gaza struggling for breath now as I write, for food for warmth and shelter. The many bereaving over dead fathers, mothers, sisters and brothers - all and each loved and lost one matters and there are a few in Israel too and each one of them matters - life I assert matters - and when it doesn't we see genocides and catastrophe's like Gaza. My own son, my own daughter's life is not more important than any others' daughter or son - my life is of no more value either than any one others life - this I assert. So many vigilled, saddened and sick of the killing. What then is the value of a life - to some it is valueless based on the others ethnicity, gender, beliefs, skin color, geographical existence etc.

Quality of life matters, in Israel some / maybe most live in unreal bubblelike-havens of escapsism, whilst their neighbours are oppressed and checked and humiliated to let Israeli's feel safe and secure; even in Tel Aviv recently I was astounded to see that bulldozers are also being used on the immigrant Jewish poor* (see bulldozer stencil).

Although there are many who resist this oppression - some hold memories of another terrible, terrible catastrophe (during the 2nd War), some like the 'rabbi's for human rights', or those in human rights groups like 'b'tselem' and a few with a rare courage the increasingly brave young students aged 15/16/17 (the Shiminitsim) who resist with eloquence and unethical obedience of state and normative culture to join national service - that takes guts. Instead they opt for prison and often alienation rather than the stark obeying of immoral national service to oppress others.

In Gaza there is alot of suffering now (we all know about this only too well). Dont let the statistics wear you down - we know its going on and we want to hear people's stories - find ways of being proactive - look for the few stories of intense human compassion coming out of the Israel. Hate hate, and keep the candle flame alight for human rights amidst this war - as all war creates terror.

Create your own candle lit vigil - small groups doing so makes a difference.