Guardian article 9th Jan: "An Israeli-owned British company has been drawn into the political controversy over arms sales to Israel prompted by the assault on Gaza"
British link with drone aiding the Israeli war effort

An Israeli-owned British company has been drawn into the political controversy over arms sales to Israel prompted by the assault on Gaza.

UAV Engines, of Lichfield, Staffordshire, is one of the world's leading manufacturers of engines for drones - unmanned aerial vehicles that are becoming critical frontline systems for military and civilian use around the world.

The company, known as UEL, is owned by the Israel drone specialists Silver Arrow, a subsidiary of the Israeli defence contractor Elbit Systems.

One of its rotary Wankel engines is used in Elbit's Hermes 450 drone. A version of the 450 makes up a squadron of the Israeli air force and has been seen over Gaza in the current conflict, being used for surveillance and targeting for Israel's F-16 strike fighters.

Commentators on reputable defence and aviation journals and Elbit's own website suggest that the Lichfield factory produces engines for the Hermes.

But Elbit's head of corporate communications, Dalia Rosen, has denied this. She said: "UEL engines are provided to the British UAV programmes and to other international customers, not to Hermes 450 in the service of the IDF [Israel Defence Forces]."

When provided with references she replied: "If you want me to confirm a false speculation you can do it, but I strongly recommend that you trust my comment." She did not respond to a request asking which other engine could be used.

The export of the engines is entirely legitimate and UK government records on arms sales to Israel refer to "components for unmanned aerial vehicles" as late at last year.

Critics, including more than 100 MPs from all three main parties, have concentrated - in a statement originating in a letter to the Guardian by Richard Burden, Labour MP for Birmingham Northfield, on December 31 - on calling for an embargo on all military sales that could be used for aggression in Gaza and the occupied territories.

Campaigners against the arms trade cite the latest Foreign Office annual report on human rights: "We have concerns over whether Israel's use of lethal force has always been justifiable.

"We have been particularly concerned that, in the course of Israeli Defence Forces operations, too little effort has been made to avoid civilian casualties. We are extremely concerned by the humanitarian situation in Gaza and remain committed to supporting the Palestinian people."

Tim Hancock, the UK campaigns director Amnesty International, which details the use of the Hermes drone in a forthcoming report, said: "The UK should suspend all arms exports to Israel, including indirect exports via other countries and the sale of military components, until there is no longer a substantial risk that such equipment will be used for serious violations of human rights or international humanitarian law."

On a page about its subsidiaries the company says: "Silver Arrow also developed and is manufacturing the Hermes 450S for the Israel Defence Forces.

After the four-week Lebanon war in 2006, Flight International's Israeli correspondent Arie Egozi reported on Israel's analysis of the contribution of their drones. "The air force also accumulated 15,000 flight hours with its Elbit Systems Hermes 450 UAVs in the conflict, flying round-the-clock missions with the type ... Squadron sources say that while the UAV's 50hp (40kW) UEL engine was strained by the increased operational demands, modifications introduced over recent years proved successful."Two defence analysts and former IDF veterans, Tamir and David Eshel, recently wrote about the Israeli and British Hermes drones in Defence Update, an online magazine.

"The Israeli Air Force designation of the Hermes 450 UAV is 'Ziq'," they said. "The version designed for the British army is called WK450 Watchkeeper. Both vehicles use the UEL AR-801010 rotary engine."

The history of UEL's involvement with Hermes, since the company was bought by Elbit in 1995, is also referred to in the 2007 edition of Jane's Unmanned Aerial Vehicles.

Despite an increase in the number of refusals for military export licences to Israel since 2001, exports continue to increase with more than £20m worth sold in the first three months of last year.

Among the items listed in UK government documents are components for a vast array of weapon systems, including components for combat aircraft, submarines and ships, missiles, military communications and assault rifles.

For three years the Commons committee on arms control has been trying to wring out of the government a clear definition of its policy on sales to Israel which it described in two reports as lacking in transparency.

"A significant part of the problem is the opaque manner in which exports are presented and the obfuscating and frustrating terms in which the government seeks to justify its decision to grant, or withhold licences."

Last year the MPs repeated their demand for an explanation.

The government replied that its policy for all sales to the Middle East assessed the risk that exports might "be used for internal repression; provoke or prolong armed conflicts or aggravate existing tensions or conflicts in the country of final destination; or be used aggressively against another country".

UAV Engines, where their At 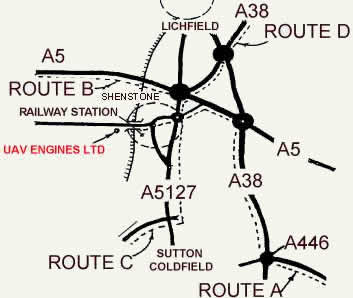 Route "D" from Derby and Yorkshire
Take M1 then A38. exit at Jct with A5. Then A5127 South. Then as Local Map
Nearby railway station provides easy connections to Birmingham International Airport & London

Israelis working for Thales in Leicestershire