Report of all Scotland protest against the current Israeli attack on Gaza.

This is a detailed report with 20 photos of the all Scotland demonstration against the Israeli attack on Gaza. There is also a round up of a number of protests around the world. 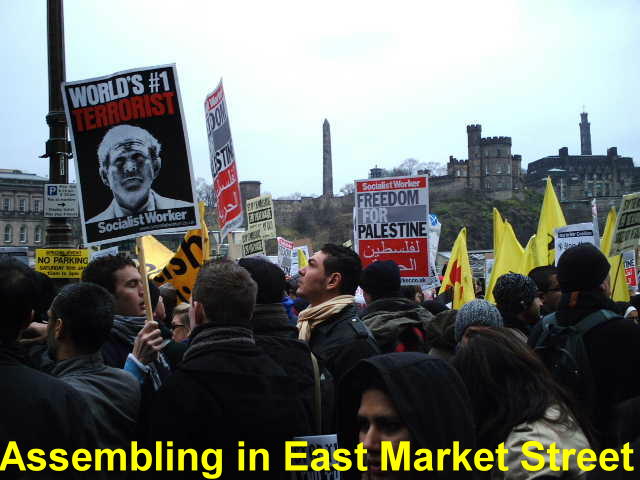 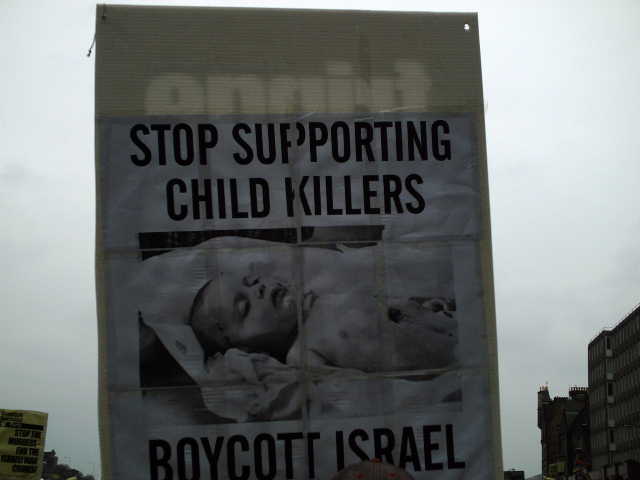 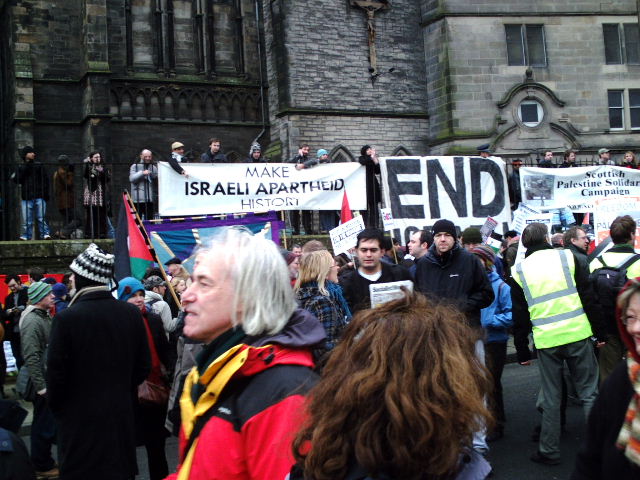 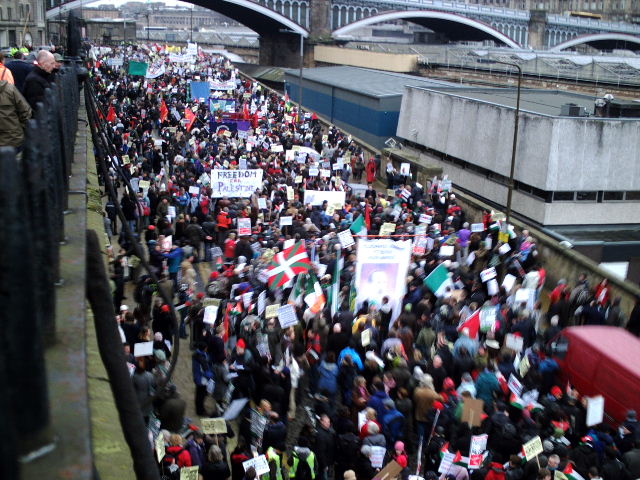 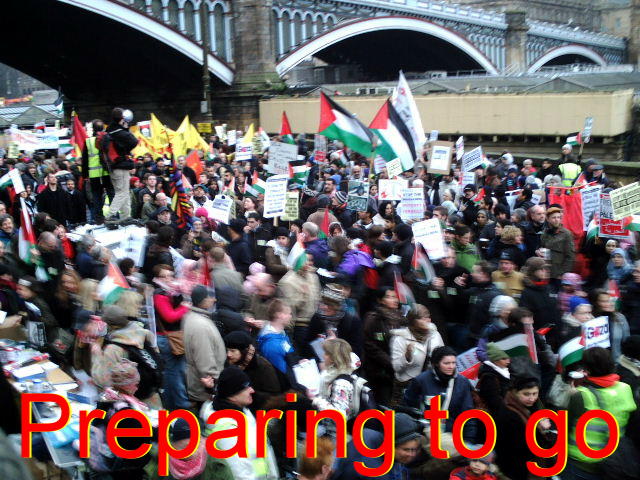 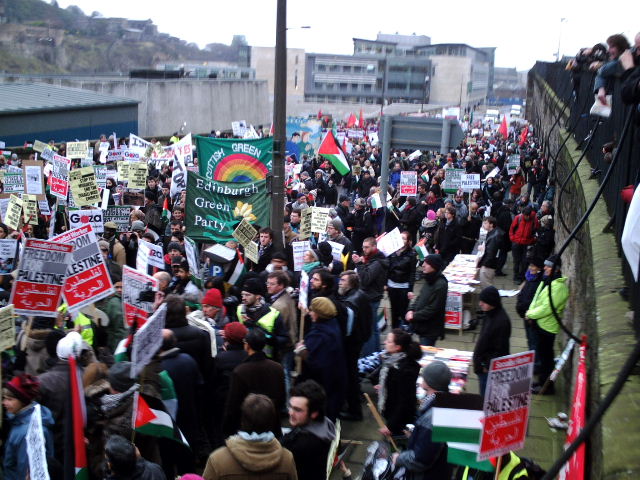 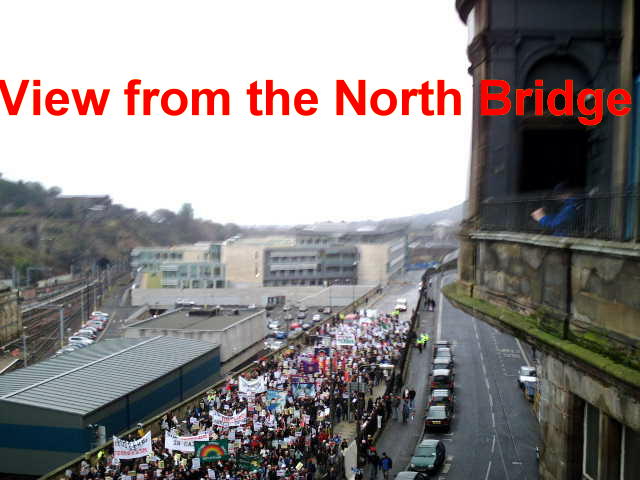 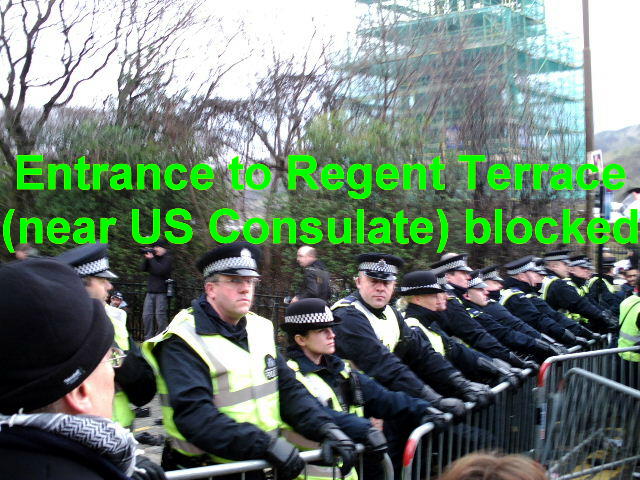 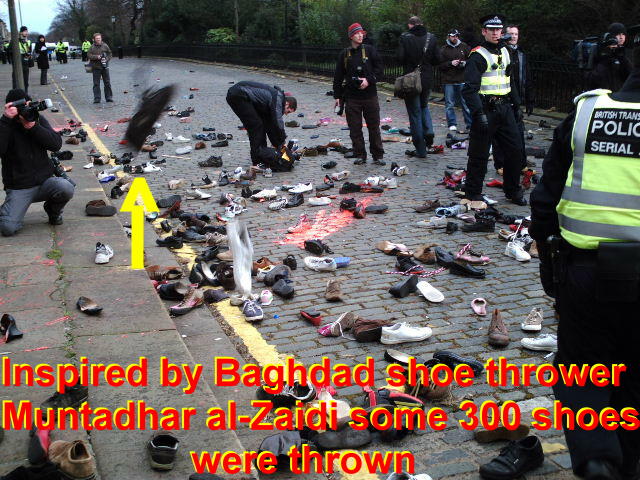 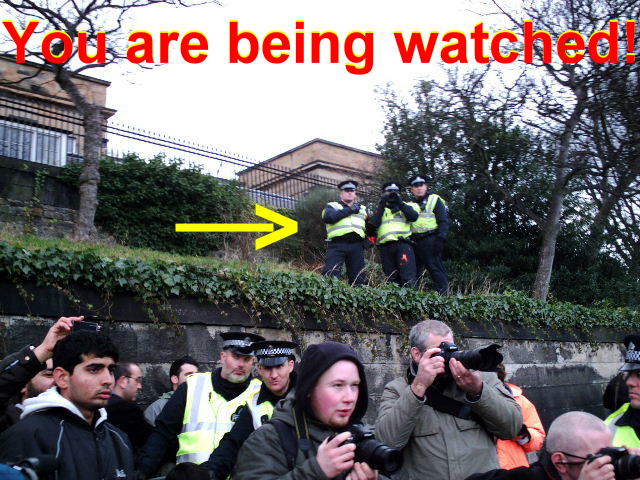 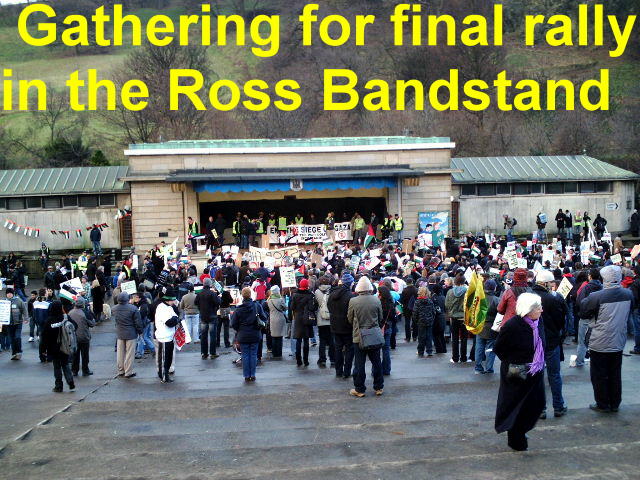 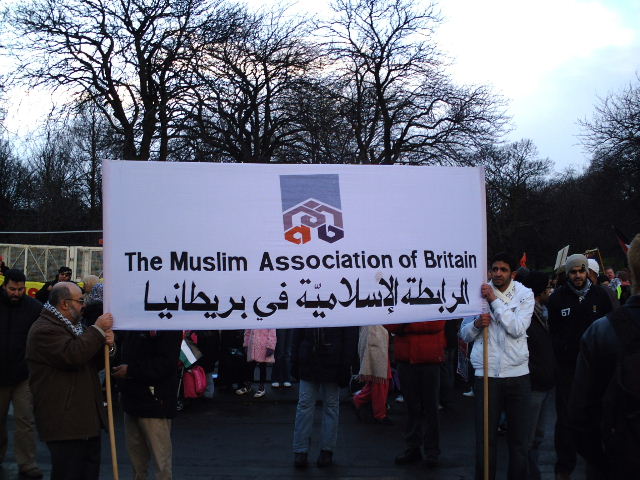 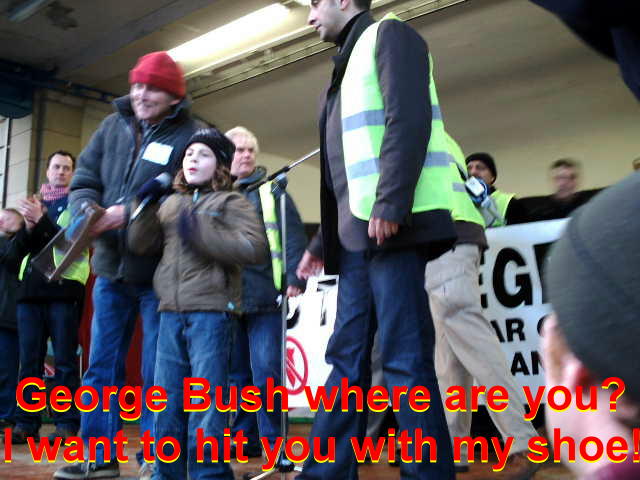 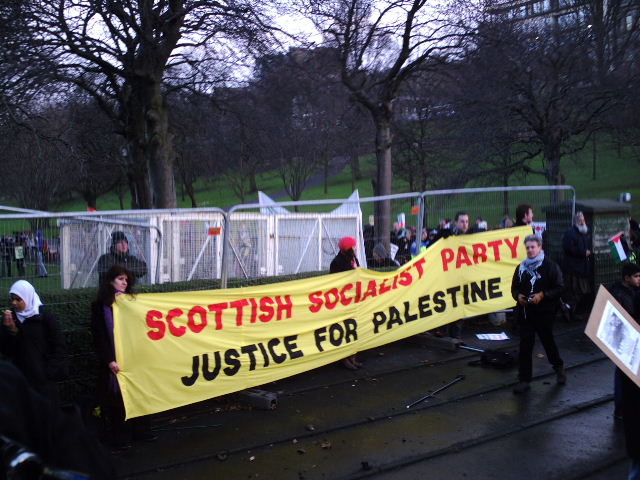 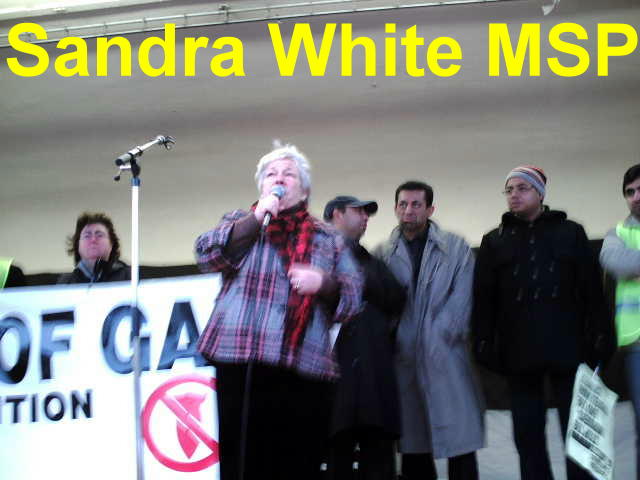 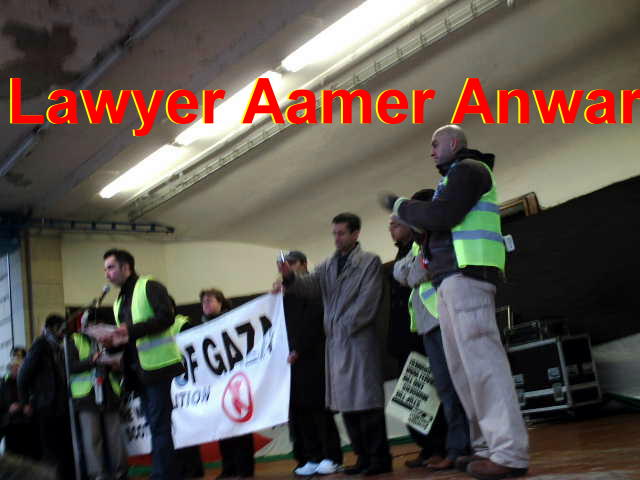 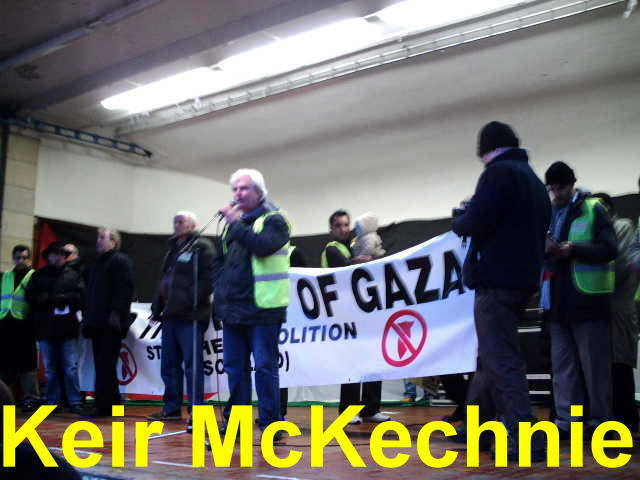 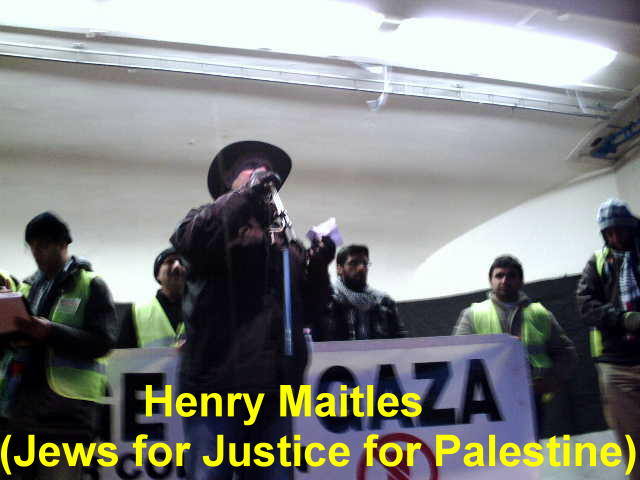 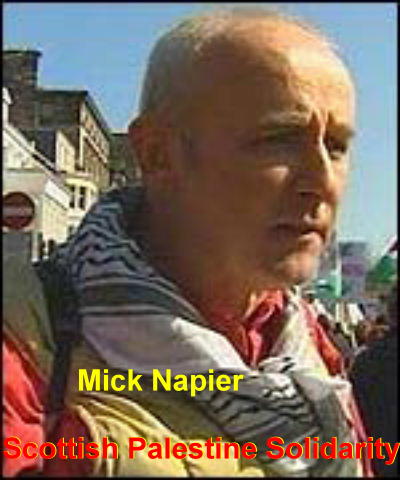 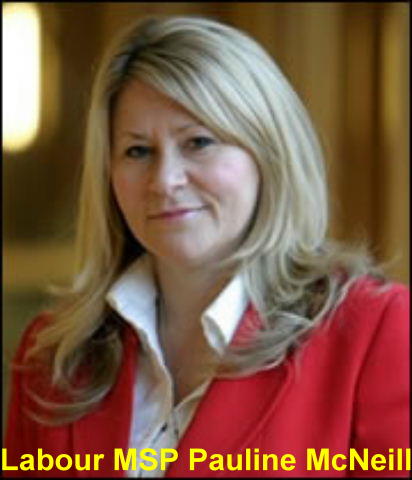 Saturday 10th January 2009 saw an all Scotland protest against the current Israeli attack on Gaza in Edinburgh.

The Scotland-wide demonstration assembled in East Market Street behind Waverley train station at 1230 and set off late due to the large numbers of people arriving from other parts of Scotland. There was a fairly heavy police presence including mounted constabulary. To chants of `Free, Free Palestine` the march set off just after One o’clock and moved along Market Street, Waverley Bridge and Princes Street towards Waterloo Place and Regent Road. The length of the march which was estimated by organisers to be about 10,000 people took around 20 minutes to pass the 300 yard length of Waverly Bridge. Chants heard include `One, two, three, four we don’t want your

Banners and placards read `End the siege of Gaza`, `Free Palestine` and `Stop the massacres`.

The march went past St Andrew’s House (the headquarters building of the Scottish Government) and the old Royal High School. The entrance to Regent Terrace (the location of the US Consulate) was closed off by police and the march turned round here and went back down towards the city centre. Firstly however many demonstrators took the opportunity to throw hundreds of shoes in the direction of the consulate. Inspired by Baghdad shoe thrower Muntadhar al-Zaidi several hundred pieces of footwear were hurled over the heads of the line of police. This went on for around 15 minutes.

To the singing of `The war machine goes round and round`, `Occupation is a crime`, and ` Free, free Muntadhar` the march went on down to the rally by the Ross Bandstand in West Princes Street Gardens.

Kenny Ross of the Scottish Fire Brigades Union pointed out the great difficulty there would be in rescuing people from burning buildings in such a densely populated area.

Fatima Helou, a Survivor of Sabra and Chatilla, said that the attack on Gaza was so indiscriminate that not just Hamas would be killed but many innocent civilians and that it amounted to ethnic cleansing. She called for UN forces to be used in both Gaza and the West Bank to protect Palestinians.

Scottish National Party MSP Sandra White said that the Scottish Parliament had called for a ceasefire right away. She called for ordinary people to say to their government that `enough is enough`. “We in Scotland support you, we bleed with you and we will not rest until this conflict is finished.”

Then human rights lawyer Aamer Anwar spoke saying that in the previous two weeks we had heard a lot about Israel’s right to defend itself. The Palestinian people have every legal and moral right to resist the illegal and violent occupation of their land. He said the Israelis would not let journalists into Gaza so as to cover up the evidence of war crimes. Calling George Bush a war criminal he also criticised the silence of President elect Barack Obama. He said the reporting of the BBC was prejudiced in favour of Israel.

Next there was a link up to a doctor in Gaza who told the silent crowd that he was grateful to the protestors and spoke of a humanitarian catastrophe in Gaza. Over 800 people had been killed and houses and hospitals were being bombarded. Over 1,000 children had been injured, drinking water was in short supply and he said that ordinary people around the world had the power to stop the slaughter.

Then Labour Party MSP (member of Scottish Parliament) Pauline McNeill addressed the gathering. Since her student days, Pauline McNeill has had a strong interest in international issues. She is the Convener of the Cross Party Group on Palestine, and was a United Nations observer at the 2006 Palestinian Authority elections, later in 2006 she visited Lebanon in the aftermath of the war there, and continues to speak out, both in the Parliament, and at demonstrations, public meetings and protests on the need for a peaceful and just solution in the Middle East. The Scottish Parliament, she said, in its emergency session on Thursday 8th January, in an unprecedented debate, called for an immediate ceasefire and an end to the bloodshed. Everyone had heard the truth today – a third of the casualties were children and whole families had been wiped out. The Palestinians in Gaza and the West Bank would not be divided. She said Hamas would not be firing rockets were it not for the Israeli blockade of Gaza.


Then Keir McKechnie of the Scottish Stop the War coalition followed telling the crowd that 100,000 were protesting in London. He said there were demonstrations all over the world and instead of arming Israel they should be sending hospital ships to Gaza. He suggested that Prime Minister Gordon Brown should expel the Israeli ambassador. He said there could be no comparison between the home made rockets of Hamas and Israeli F 16s and Apache helicopters.

Then Mick Napier of Scottish Palestine Solidarity spoke: “Friends the Israelis have a very simple calculus. They know they can murder Palestinians at will, they know they can murder; they’ve been doing it for a bloody long time. They watch the reaction around the world and when it reaches certain intensity they know Western governments will rein them in. He said the answer rests in our hands – the more pressure we put on them the better. Bill Rammell (a Minister of State at the Foreign and Commonwealth Office) said there was no difference between the US and British position. According to former British Ambassador Craig Murray while Gordon Brown publicly calls for a ceasefire he privately tells British diplomats in New York to vote with the Americans. He likened the Hamas fighters in Gaza to Spartacus. He spoke of the attempt of a number of Scots to deliver medicine to Gaza last year when the Egyptians (who work hand in hand with the Israelis) refused them entry. This drew loud boos from the crowd. He urged boycotts of Israel.

There was a brief goodwill message from Sinn Fein president Gerry Adams and then Osama Saeed of the Scottish Islamic Foundation talked to the crowd. He said `Salaam 'Alaykum` (peace be with you) and called for an immediate ceasefire. He said “Don’t just get mad, get active.”

Another speaker live from Gaza – an International - told of the dreadful humanitarian situation.

Henry Maitles (Jews for Justice for Palestine) spoke next and said he was proud and privileged to march alongside the Stop the war on Gaza demonstration that day. He said that the Israeli army did not act in his name and commended those demonstrating in Haifa and Tel Aviv against the war. “There will be no peace in the Middle East without justice for Palestinians.”

There was a message from deputy first minister Nicola Sturgeon saying that Scottish hospitals would be open to people from Gaza.

Joy Dunn (on behalf of the STUC General Council) said that the number of casualties and the violations of International Law were terrible. She called for a Palestinian state and criticised George Bush’s failure to call for a ceasefire.

Penultimate speaker was John Barrett MP (Liberal Democrat Edinburgh West constituency) In his daily blog he said on January 6th: “Just when you think things cannot get any worse, often they do. Today there are reports of a UN run school in Gaza being hit and 40 people being killed, and also three Israelis being killed by their own side. The term often used to describe this is "friendly fire" but it is no such thing and is one of the many odd phrases used in war, such as "theatre" to describe the field of action or "theatre weapons" which are those between tactical and strategic. The words used do not capture the human suffering and misery on all sides. The history of the region has a legacy of bloodshed and terror on both sides. From early attacks on the UK Government by Jewish terrorists, when Israel was being established, to the modern terror from both sides. There has been little improvement over 60 years. One thing that has happened elsewhere and will no doubt happen someday in Israel and Palestine is that today's terrorists will become those involved in negotiations in the future. The killing must stop and the discussions must start again. A two state solution with both sides accepting the existence of the other, within secure borders, is the only way forward.”

Final speaker was Mohammed Asif, a refugee from Afghanistan who called for support for Hezbollah and Hamas in their opposition to Israel.

20 photos from the day are attached.


Here is how the event was reported on the BBC Scotland website:

Here is an Al Jazeera round up of World protests:


Round up of demonstrations around the world:

Here is an Israeli Indymedia report of a demo in Tel Aviv:

Here is the Israeli Indymedia report from Jaffa:

From Indymedia Chicago news of a large and lively demo:

From Liguria (Italy near the border with France):

THE WORLD IS WATCHING!