Rock wool, whilst sold as an eco-friendly product, is a dirty thing to make. In the USA, Erin Brokovich is investigating claims that a now-closed Rockwool Group factory is responsible for the high rate of cancer locally. Meanwhile, the residents of the municipality of Pican, Croatia are protesting against a new factory which was built illegally. The factory regularly floods the valley with thick smoke. Read their press release below: 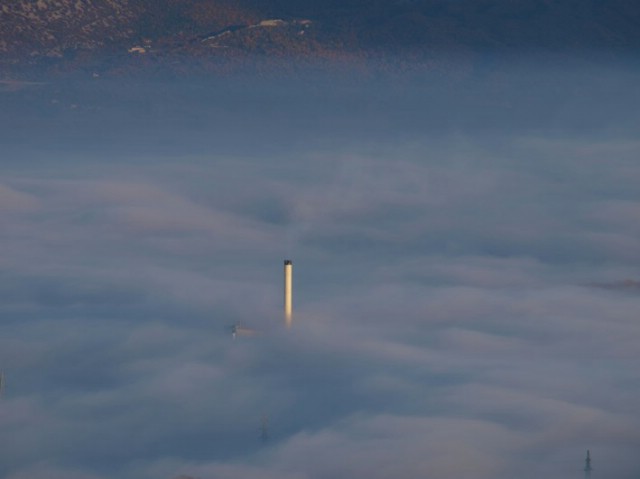 the chimney flooding the valley with smoke 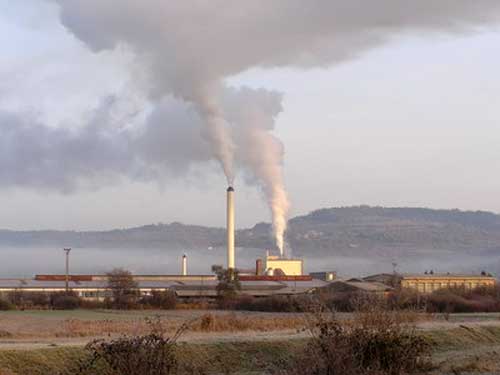 the factory at a distance 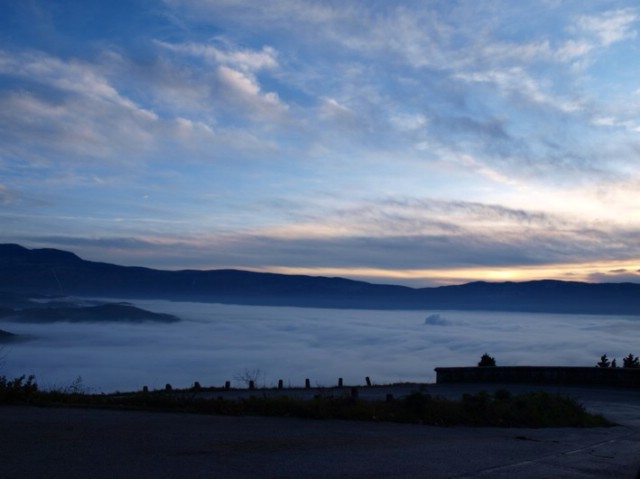 a valley full of pollution

In October 2005, Rockwool Adriatic (part of the Danish-based Rockwool Group) bought land in Croatia for 1.98 Euro per m2 – a gift from the Croatian Government, which was falling over itself in eagerness to accept foreign investment, no matter what the future costs would be. Rockwool had already established a headquarters in Zagreb before the land was bought! They do not have to pay ANY income tax for the next TEN YEARS!! The agreement states that Rockwool will be made 10,000 Euros a month if for any reason they are prevented from normal production.

But many facts point to an obious conclusion: The multinational corporation moved in under false pretences. Local residents were initially told a blanket making factory would be built (in the USA, building insulation is labelled 'insulating blankets'). The site was presented as a greenfield project and there is evidence that the EU is blackmailing the Croatian government to this factory. It is in fact being used to produce rock wool, which is a fibrous solid (an amorphous silicate to be precise) manufactured from slag metal and used as insulation. Whilst undeniably safe as an end product, and ironically enough, praised as an ecofriendly means of insulation, the production process is a dirty one.

The factory was built in Pican, which lies in a region at the top of a large peninsula called Istria (Istra in Croatian). Istria is next to Italy and is a popular tourist location, but for how much longer? Prior to the factory's arrival, the state offered incentives for rural development and growth. The factory itself is built in the midst of an agricultural area, on protected national water reserves which are the only source of drinking water on the peninsula.

Rockwool's modus operandi appears to be to produce for 10 to 15 years and then movE on before encountering problems, that is to say, before the consequences of pollution become visible.The impetus in Croatia may be a new EU law that prohibits the use of formaldehyde. Rockwool multinational continues to use this chemical in Croatia, which is still not under EU laws. The factory has transferred parts from Poland, where rumour has it the workers have started getting all sorts of diseases.

In 2007, a complaint was filled against the Rockwool factory by the Inspector for Environmental Protection for using the emergency chimney (in contravention of the Environment Protection Law). In September 2007, a legal complaint was made for breaking the Waste Management Law for improper disposal of waste. Both of these legal actions have failed in the lower courts.

In November 2007, a legal complaint was made for emitting polluting substances into the air - SO2 and ammonium above the the limits prescribed by Croatian (and EU) laws.

Laws were broken or bent to the maximum to get the factory running. There were changes made to the location and construction permit which fundamentally altered the conditions of factory production; but no new Environmental Study was made (July 2008). The factory has no legal agreement on water use – they need vast amounts of water and right now they buy it privately, literally pumping water from an adjacent abandoned business site.


Activists have made independent measurements. The results are shocking, but the state refuses to verify them. The measurements: CO2, CO and methane portions in the air were way above the allowed limits. There was not enough oxygen, whereas CO2 and CO were way above the measured numbers on Rockwool's "official" measuring stations.

Zdravko Beric, scientist and a director of the firm that did a measuring with a non-pilot flying vessel (his licence is not acknowledged in Croatia although he is one of eight people in Europe that is qualified to make such measurements), stated: K - 40 (Kalij): limiting value 3000 Bk/kg, value measured above Rockwool:11.730 Bk/kg, for Ra - 226 (Radium) limiting value 300 Bk/kg, value measured above Rockwool: 2.570 Bk/kg. He also found 7 hard metals and 29 carcinogenic substances. Further on, salts of nitrates, sulfides, sulfates, acetates of mercury's compounds antimone and cadmium that fall on the earth contaminate the agricultural area 100%. Consumption of fruit and vegetables containing these substances at 0,53 gr/m2 causes health problems, but WITH consistent exposure, cancer is caused by 1.430 gr/kg of vegetables or fruit. [1]

Beric comments "With this amount of radioactivity we guarantee that in 10 years all the population will start getting ill from throat, thyroid and bronchial cancer, getting skin allergies, and for every month of the factory's production 10 years of decontamination will be needed." [2]

Beric's observations are interesting in the light of the situation in the USA where Erin Brokovich is currently considering a case to sue Rockwool on behalf of 87 people with brain tumours who live near the site of a former Rockwool factory in Cameron, Missouri. [2]

By any intelligent standard, every facility of this type needs to be based on a legal-scientific document - this study was done by the firm Ekonerg, hired by Rockwool and the Environment Protection Ministry. It is full of false data, comprised of incomplete and estimated measurements. For example, the nearest settlements are said to be 3.5 km away, when in fact they are 300 to 500 metres away. The study says that the population resides in this area only temporarily. The data from the cost-benefit analysis are also false. The study was not done by qualified independent scientists who were familiar with atmospheric conditions, geography and demography.

The local community here is spontaneously resisting; the last bigger protest was November 30 (approximately 1000 people) and before that August 31st (1500 people). The entire population of the immediate surrounding valley and hillsides is only 2,500.There are three ecological and environmental associations fighting against it, but it feels like we are fighting something that is bigger than us. The week after the last bigger protest the factory fumed like hell and smelled of urine, firecrackers and sawn iron. The factory works mainly by night, since the smoke is less visible. 200 protestors spontaneously appeared in front of the factory every night until the operation was shut down. Heavy police escorts were deployed to protect the workers and the poice also intimidated protestors. Neighbourhood families coming out in the middle of the cold and rainy night prompted politicians to reinvent themselves as 'concerned'.


An international campaign is just beginning, we cannot let Rockwool get away with this!