Ahava store in London occupied by activists for Palestine 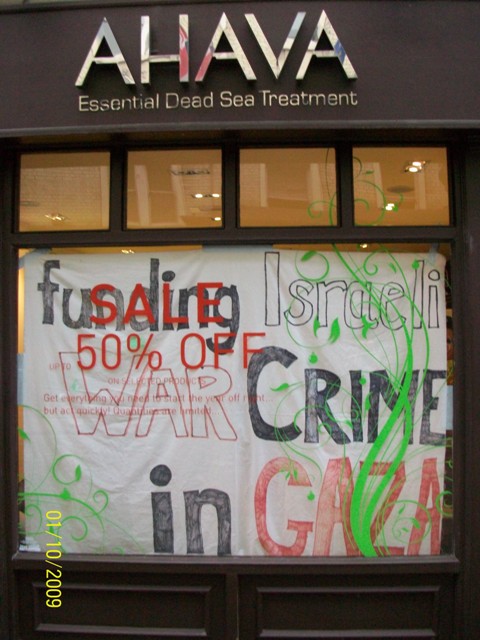 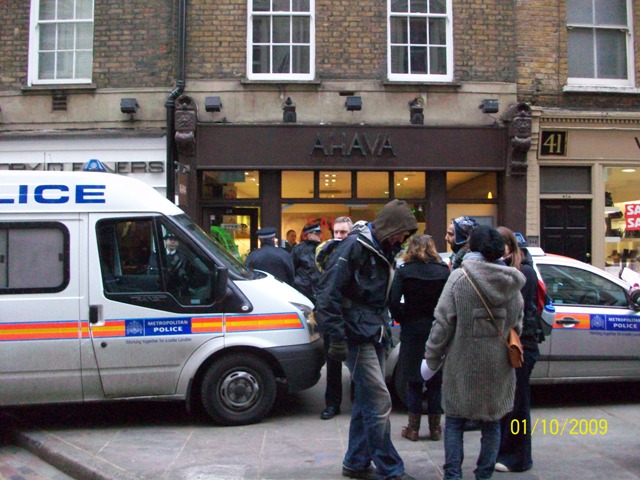 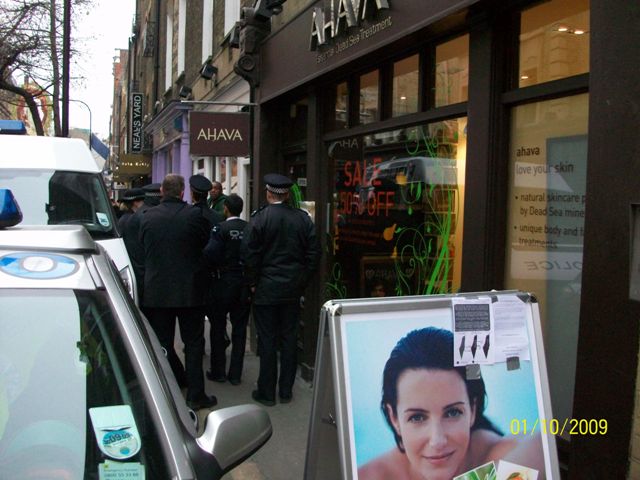 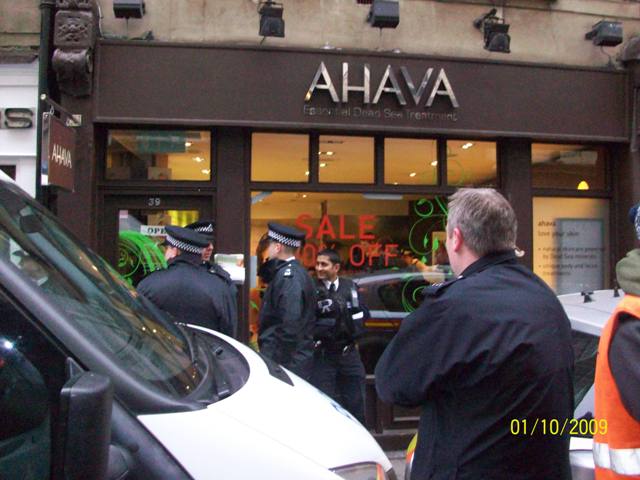 Yesterday activists occupied the Ahava cosmetics shop in central London, in protest against the Israeli government's deadly massacre of Palestinian civilians in Gaza, and Ahava's own activities. Indeed, the Israeli-owned shop sells cosmetic products that have been manufactured on an illegal Israeli settlement in the occupied West Bank. Activists put up banners, locked themselves to the shop door and distributed informative leaflets to passers-by and local shops.

The shop was closed from 11am, and the police didn't managed to remove the activists from the shop until 4.30pm, they shop was forced to close for the duration of the action. Three activists were arrested and, as they refused to give their names to police, only to a judge, have skipped the police bail stage of the legal process and have already been charged with aggravated trespass.

The action aimed to draw public attention to Ahava's involvement in war crimes and crimes against humanity in the Occupied Palestinian Territories. The West Bank is Palestinian territory which was occupied by the Israeli army at the end of the 1967 war. The Israeli occupation of the West Bank is still ongoing, and has involved the creation of Israeli settlements, which is a war crime under international law.

One of Ahava's main factories is located in the illegal Israeli settlement of Mitzpe Shalem. In consequence, the sale of Ahava products is illegal, and Ahava Dead Sea Laboratories is ancilliary (complicit) to war crimes and crimes against humanity under international law and British law according to section 52 of the International Criminal Court Act 2001.

Furthermore, the pattern and strategy of illegal Israeli settlements in the Occupied Palestinian Territory has been a racist and colonial one, intending to forcibly annex the greatest possible portion of Palestinian land without its indigenous population, and settle it with Israeli Jews. These illegal settlements linked by a road network that is forbidden to Palestinians have created Israeli-style apartheid, which is also a crime under international law.

The timing of this action was chosen to coincide with the day of national demonstrations against the ongoing Israeli government massacre of Palestinian civilians in Gaza. Today is the 14th day since the beginning of the Israeli aggressive military campaign 'Operation Cast Lead' which as of yesterday had killed 804 Palestinians including 230 children and 93 women, and injured and maimed over 3310. Obviously tax Ahava pay in Israel proper funds the slaughter in Gaza.