Climate Activists smash windows at The Department for Transport

Climate Suffragettes smashed glass front doors at The Department for
Transport early this morning in protest against the government's
decision to expand Heathrow. 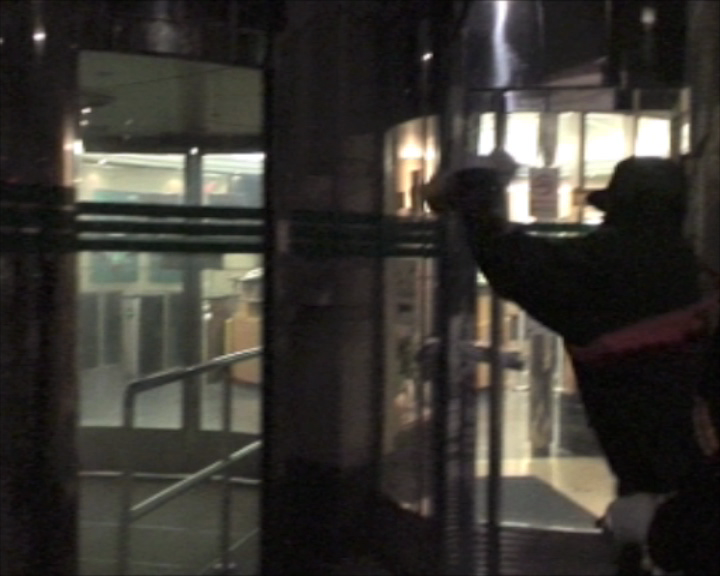 At 4 am, three women, wearing red climate sashes, hurled bricks and
broke the glass doors of The Department for Transport, on Marsham
Street, London. Echoing the protests of the Suffragettes, they wrapped
their bricks in notes that read: 'NO THIRD RUNWAY, THE SUFFRA-JETS ARE
BACK before hurling them at the government building. They also
hurled green paint to symbolise the greenwash they heard from the
government today. They targeted the building as a direct response to
yesterday's decision to allow a third runway at Heathrow.

A spokeswoman said: "The government has opened the flood-gates for
radical action. Yesterday they sacrificed all of our futures and spat
in the face of democracy. The third runway is unwanted and is a
global threat. When they make democracy meaningless what other
reaction could they expect?

"We have less than ten years to turn climate change around. Women
cannot just stand by and let this government treat our futures as a
joke. We fight for the safety of humanity, and if the government will
only listen to the smash of windows, then so be it."

Noting that their elected MPs had been refused a vote on this issue, she added;

"The government has bypassed democratic process for the sake of
corporate profit. The Suffragettes died for the democratic rights that
the government so sweeps aside. We take our lead from our past to
defend our future."

Short video clip of one of windows being smashed. 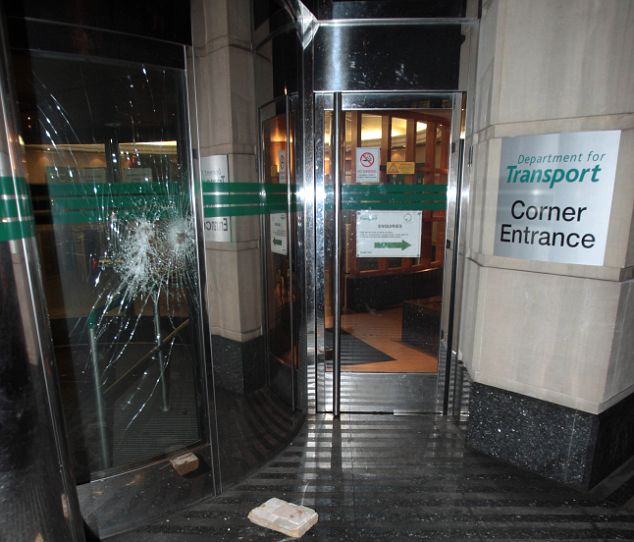 At school they told us about women throwing themselves under horses and chaining themselves to railings... a very watered down version of history. Sylvia Pankhurst describes the militant suffragette tactics and actions below...

"Street lamps were broken, Votes for Women was painted on the seats at Hampstead Heath, keyholes were stopped up with lead pellets, house numbers were painted out, chairs flung in the Serpentine, cushions of railway carriages slashed, flower-beds damaged, golf greens all over the country scraped and burnt with acid. A bowling green was cut in Glasgow, the turf in Duthie Park, Aberdeen. A mother and daughter, bearing an ancient name, spent much of their time travelling in trains in order to drop pebbles between the sashes of carriage windows, hoping the glass would smash on being raised. Old ladies applied for gun licences to terrify the authorities. Bogus telephone messages were sent calling up the Army Reserves and Territorials. Telegraph and telephone wires were severed with long-handled clippers; fuse boxes were blown up, communication between London and Glasgow being cut for for some hours. There was a window-smashing raid in West End club-land; the Carlton, the Junior Carlton, the Reform Club and others being attacked. A large envelope containing red pepper and snuff was sent to every Cabinet Minister; the Press reported that they all fell victims to the ruse. Boat-houses and sports pavilions in England, Ireland and Scotland, and a grand-stand at Ayr race-course were burnt down. Mrs. Cohen, a Leeds member of the deputation to Lloyd George, broke the glass of a jewel-case in the Tower of London. Works of art and objects of exceptional value became the target of determined militants. Thirteen pictures were hacked in the Manchester Art Gallery. Refreshment pavilions were burnt down in Regent's Park and Kew Gardens, where the glass in three orchid houses was smashed, and the plants, thus exposed, were broken and torn up by the roots. Empty houses and other unattended buildings were systematically sought out and set on fire, and many were destroyed, including Lady White's house near Staines, a loss of £4,000, Roughwood House, Chorley Wood, and a mansion at St. Leonard's valued at £10,000. There were fires at several houses in Hampstead Garden Suburb, at the Suburb Free Church, at Abercarn Church, Monmouthshire, in the Shipcoat Council Schools, at South Bromley Station on the London underground, and in a wood yard at Walham Green. Hugh Franklin set fire to an empty railway carriage; he was imprisoned and forcibly fed. An old cannon was fired near Dudley Castle, shattering glass and terrifying the neighbourhood. Bombs were placed near the Bank of England, at Wheatley Hall, Doncaster, at Oxted Station, and on the steps of a Dublin Insurance Office. Lloyd George's new house in process of erection at Walton-on-the-Hill was injured beyond repair by a bomb explosion. The story of a motor-car passing through the village at 4 a.m., two broken hat-pins, a hairpin, and a galosh indisputably feminine, found on the site, were the only traces of the incendiaries, Emily Wilding Davison and others, all of whom escaped undiscovered. That this was the work of the Suffragettes was usually made evident by literature deposited in the vicinity. In most cases the culprits had altogether disappeared and no clue to their identity was left. Where a capture was effected, the punishment varied considerably: up to nine months for breaking windows or the glass covering pictures; eighteen months or two years for arson. Miriam Pratt, in an unsuccessful attempt to burn an empty house, dropped her watch. Her uncle, a police constable in whose house she lived, identified the watch and gave evidence against her. (pp. 433-435.)"