As the police blocked people marching from Trafalgar Square to the Kensington, causing chaos on many Westminster streets as a result, there was also a small demonstration at the Israeli embassy, with a massive police presence.

From 7pm the protesters were repeatedly told that their time was up, and that they had to leave the area, at 7:30 police began to push them out of the barrier cage towards Kensington High Street tube, but as on nearly every day people tried to take the road rather than the pavement. There was a standoff, and reinforcements were sent in before the protesters, now numbering around 80, were slowly marched into the underground station by at least 100 police in riot gear. Another 50 police and several horses remained at the embassy. 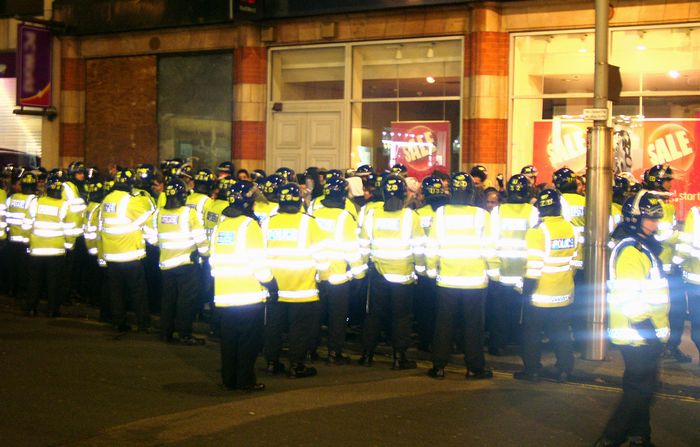 I was in the first kettle- or ‘bubble’ as the police call it. Once we got to the station we were herded right up to the ticket barriers still within the kettle. Over the other side of the barriers there were several Transport Police who made us go down one set of stairs only to one platform only, and came down onto the platform with us, then herded everyone on to the train. After some delay the train set off but the cops had instructed the driver not to stop until Victoria, as they had decided to ‘escort’ us to there.
At Victoria everyone got off and the police surrounded one young man as they said he had ‘hit a police officer’. We all stood around and tried to take pictures but the police forced people to move on and up the stairs, assaulting one woman.
Outside the station there were some demonstrators milling around waiting for the rail replacement bus and some cops- about 15? watching them. I went back into the station to continue my journey home, it was still crawling with cops. Down on the platform there was now no sign of the guy who had been surrounded, or the police who surrounded him.

The thing was the protest at the embassy was utterly peaceful, not even any flags burnt or anything yelled at the police, people were obediently standing inside the pen (‘designated protest area’)- yet they still decided to treat the crowd in this way. If they had just waited another hour or so the demo would have dispersed of its own accord, but instead they bang out the riot gear and the fella on horseback with a red megaphone and a dispersal order. Jokers.

Maria has now been on hunger strike for 7 days in solidarity with the people of Gaza 24/7 in parliament square please come to the square and offer her support!