On Jan 17, animal rights activists went to the homes of two senior execs of clients of Huntingdon Life Sciences.After visiting the homes of Jennifer Luray(Abbot Labs) and Alice Rivlin(NYSE), protester detoured to the Israeli Ambassador's home to protest the massacres in Gaza. 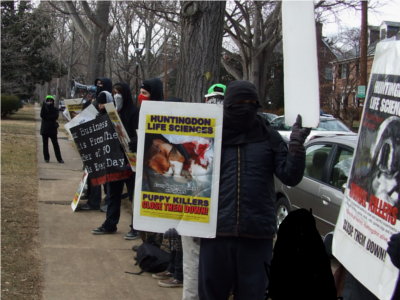 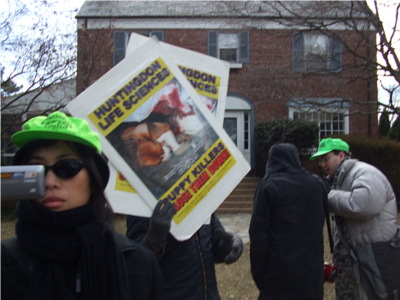 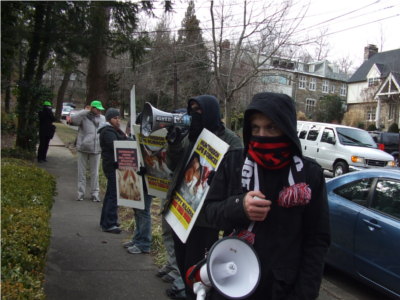 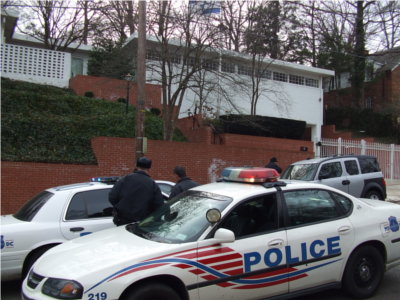 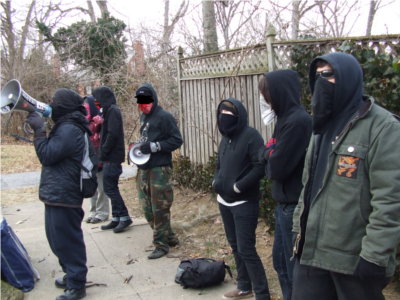 These protests took place in spite of severe police violence at the last round of HLS home demos on Dec 19, in which activists were beaten by police and I was nearly driven to my death over a cliff.

This time around, everyone expected the worst, so two legal observers and multiple videographers were deployed to reduce the value to police of taking out any one of them. Several cop cars, a suspected FBI car, and a van filled with cops followed protesters around but this time around did not engage.

With Mary Cheh's bill to ban home demos under consideration and debate in papers like the Washington Informer, these protests now have a lot of public attention.

With most campaign donations to Mary Cheh being for $500 and one of them coming from Alice Rivlin, it was appropriate that Alice got one of the home demos! It was made vclear in front of her home that these protests wouyld continue come hell or high water, unless Huntingdon life Sciences is removed from all New York Stock Exchange and subsidiary bulletin boards.

The last stop was the home of the Israeli Ambassador, to protest the blood-drenched massacre in Gaza. The sickening cruelty of Israel towards the children of Palestine was deemed to cry out for action from protesters against deliberate torture and murder in any other context.

Background: Huntingdon Life Sciences or HLS is a contract animal testing lab where 500 animals are tortured to death every day. This at a laboratory where falsified test results were revealed by a scientist who quit-and was sued for revealign this fact.Six undercover investigations caught workers there puncing beagle pups in the face, pulling monkey's tails off for fun, and showing up for work drunk or stoned.

Over 12,000 beagle puppies were killed at HLS testing SPLENDA, and it is suspected that the animal tests on Vioxx may have been done there as well. Vioxx killed over a dozen people and sent hundreds more to the hospital with serious heart trouble.