Protest at Arms to Israel from Staffordshire

A protest was held today outside UAV Ltd. in Shenstone, Staffordshire to protest against the company's link with the repression and massacre in Gaza. 30 protesters from around the Midlands, including locals from Shenstone, gathered to draw attention to the fact that this company is owned by the Israeli defence contractor Elbit systems, and all the evidence points to them producing the engines for the drones which have been used to carry out surveillance and targeting for the IDF strike fighters. 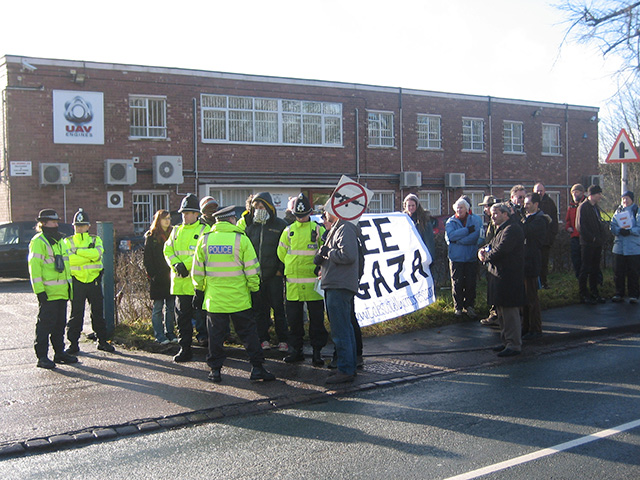 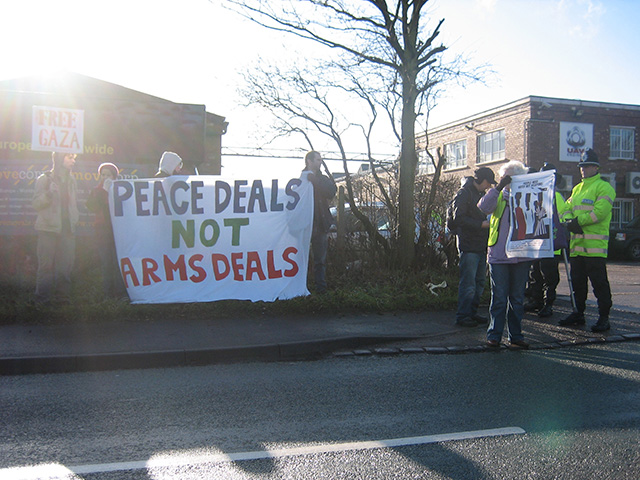 The demonstration in support of Gaza, outside UAV Engines, Lynn Lane, Shenstone, Lichfield aimed to question whether UEL is making engine components for the Hermes 450 drones that the IDF ( Israeli Defence Force) are using. Elbit's own website states that UAV Ltd produces engines for the Hermes 450. The demo called for an immediate stop to the UK governments arms exports to Israel.
The Industrial Estate where UAV are based and Shenstone Village were leafleted to raise awareness amongst the public of UAV Ltd's link with the arms trade to Israel.

The protest was heavily policed, with one pointless arrest. The police initially tried to move the protest away from in front of the factory, but failed. UAV had informed the police that they were unwilling to talk to any protesters and police prevented us from delivering leaflets to the factory.

Background information;
On the 9/01/2009 The Guardian and Amnesty International both raised questions about a link between UEL, Silver Arrow, Elbit Systems and components in UAV drones used in Gaza. One of the allegations is that evidence seems to point to the Hermes 450 drone (ZIQ) which is being used in Gaza, containing engine components made by UEL. Elbit's own website state that UAV Ltd produces engines for the Hermes 450. (See link to Elbit Systems website). According to Janes International Defence Review “Elbit's U.K. based subsidiary, UEL, makes the engine for the Hermes 450.” (1 June 2003)

Out of the 1,230 people (and rising) killed so far it is estimated that around a third of these have been children. 50% of the population of Gaza are under the age of 18.

Just quickly wanted to say that the first line of the leaflet distributed today read:

'Our protest is against UAV Ltd, not the workers'

As was already mentioned many premises in the vicinity were leafleted. Only through local awareness and action will we be able to halt UAV Engines trade in death. Despite a great deal of hostility from the Police this was a great action. Demonstrators were more aware of the law than the Police, no surprise there! Hopefully we can build on this for the future

It's been on the newswire for 6 days and it was listed on the Birmingham Indymedia Events Calendar for around 6 days too.

Here's a link to the callout:

As so often the police acted today as private security for the arms trade - paid for by the taxpayer, of course. I was there and the cops constantly went on about "facilitating public protest" and that they were impartial. However, what they actually did was shove protestors out of the way, in order to keep us from leafletting workers (which is not illegal, as long as done politely.) They said that UAV had asked for us to be prevented from leafletting their workers, and the police achieved this (by shoving us out of the way - or "guiding" us as their new-speak had it). So, police doing exactly what UAV asked then - impartial? When asked, in response, if we could deliver some leaflets to the reception under police escort, they refused to even consider it. Impartial? "Facilitating" protest? (Which means "make easier, Old Bill, not "control and try to dominate", btw). At least when protestors see the cops acting like arms company stooges on a fluffy demo it radicalises new activists, and makes us more determined!

Rev Warren Bardsley C of E mentioned on the above article from Shenstone recently returned from Jerusalem, he was delegated to hand in leaflets on our behalf.

At the start of the demo the most aggressive officer most eager to"facilitate" couldnt or wouldnt clarify the law & when told he was helping facilitate genocide+ ethnic cleansing against international law said simply good,this landmark in international relations is probably on film. Reaction from many people in the area was mostly pretty good with what sounded like support from the Dukes of Hazard.
Flouro jackets are v.useful for handing out leaflets to vehicles on busy roads.

The pointless crap arrest was for a man urinating discretely in a hedge away from public view, complete waste of public money & police time.

The individual was arrested but taken into police custody for refusing to give their details to the officer who did not in fact witness any offence take place. This followed after the individual had been followed around Shenstone by two Officers for some 15 minutes. When he was cuffed the Police used excessive force claiming he was resisting arrest. One officer wanted to cuff them behind, however, the other saw no reason for this. The individual has marks and bruises to both of their wrists due to how tight the cuffs were. The two officers were backed up by 2 further police vehicles and the FIT guy who was previously at the protest. Apparently, the speed of the back up was astounding arising suspicions that they were waiting to pounce. The Police would not disclose to others to which station the individual was being taken. Upon arrival at Lichfield station they continued to withhold details from the Police. This led to the Police asking them to remove several items which would not normally be the procedure for such an alleged offence. A Duty Solicitor was requested who would arrive in 40mins. This I am informed turned out to be over 2 and a half hours. The duty did not assist the individual and it was only after a phone call to the CDS that the individual was informed of their legal position. After giving their details they received a Police caution and were informed they would need to make their own way back to Shenstone. All in all a thorough waste of Police time and resources