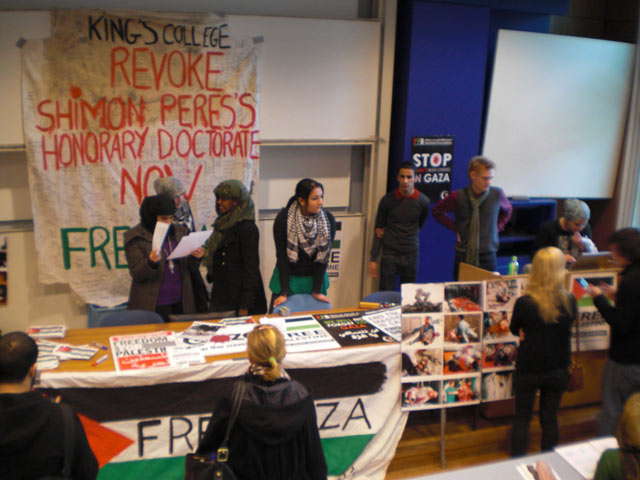 Over 50 students have occupied a lecture theatre to demand the immediate revocation of Shimon Peres's Honorary Doctorate awarded to him last november by the College without consultation of the students. Shimon Peres is responsible for over 60 UN breaches and was dubbed "the butcher of Qana" for his role in the massacre of the lebanese village in 1996. As the Israeli president, he is responsible for the recent massacre in Gaza and the ongoing blockade. Students are following the lead of universities such as Soas, LSE and Essex in the hope that their action will put pressure on the university to condemn the Israeli offence on Gaza and Revoke Peres's award and show solidarity to the people in Gaza.
KING'S STUDENT OCCUPATION BEGINS TO DEMAND IMMEDIATE REVOKE OF PERES AWARD

Students from King's College London have begun an occupation in an urgent move to demand action from the institution.

Over 50 students took over a lecture theatre at Strand campus this morning following a wave of protest occupations that have swept across UK universities.

SOAS, LSE and Essex universities began the movement in solidarity with Palestine after the start of the Gaza onslaught, and numerous other universities are expected to follow later this week.

The move comes following the King's Council decision to award President Shimon Peres with an honorary doctorate for "recognition of the efforts of Mr Peres to find a peaceful solution to conflicts in the Middle East" in November 2008, and the subsequent muteness of the Principal following the devastating assault on the Gaza Strip.

The appalling Israeli action has killed over 1,300 Palestinians and injured thousands. Tens of thousands of civilians have been left homeless. Head of the UN Palestinian refugee agency in Gaza, John Ging, is now joining international calls for an investigation into the war crimes of the recent action, wherein Israel stands accused of using banned weapons such as phosphorus bombs, attacking medical facilities, including the killing of 12 ambulance men in marked vehicles, and killing large numbers of policemen who had no military role, amongst other atrocious crimes.

The spokeswoman Victoria said, "The Principal's initial response did not answer our concerns. Peres's role in the Qana massacre in April 1996, involving the shelling of a UN refugee camp in Lebanon, was completely ignored. Given the very serious war crimes allegations that Israel is now facing due to its recent actions in the Gaza Strip, we are once again calling on the doctorate to be immediately revoked by King's College London."

One medicine student said: "It's great seeing the student support for this event. We really feel we're contributing to a good cause. It really shows that students can have their say on things that matter to them."

Over 500 students have signed the petition to revoke the award online.

The students are also demanding that King's College issue a formal statement condemning the Israeli action and bombardment of Gaza Islamic University, and provide a transparent list of their arms investments in Israel.

The peaceful occupation continues and promises to welcome high profile speakers during the week.
DEMANDS IN FULL


1) King's College London should issue a formal statement condemning Israel's actions in the Gaza Strip, acknowledging particularly the effect on educational institutions such as the bombing of the Gaza Islamic University and expressing concern about war crimes allegations. King's College should encourage other universities in the Russell Group to make such a call, as well as informing the national press and the UK and Israeli governments of this call.

3) King's College London should provide five fully-funded scholarships to Palestinian students, giving such students an opportunity to an education which the attack on Gaza and the previous blockade has denied to them.

4) King's College London should facilitate a cross-campus fundraising day to raise money for the crisis in Gaza. This should be sent to the charity Medical Aid For Palestinians.

5) King's College London should establish links with universities and other educational institutions affected by the crisis in Gaza in solidarity with their plight.

7) Any old books, computers or other unwanted teaching/administrative resources should as soon as possible or at the end of this term be donated to universities or schools in the Gaza Strip that have been affected by Israel's attack.

8) There should be no repercussions for any students involved in this protest. Universities should be a place where freedom of expression is encouraged, and the student movement in the UK and around the world has a proud tradition of organizing protest actions, whether against South African Apartheid or the wars in Iraq and Afghanistan.

kcloccupation@gmail.com
2) The group have set up a blog with frequent updates at

http://kcloccupation.blogspot.com
3) The Peres petition can be found online at: