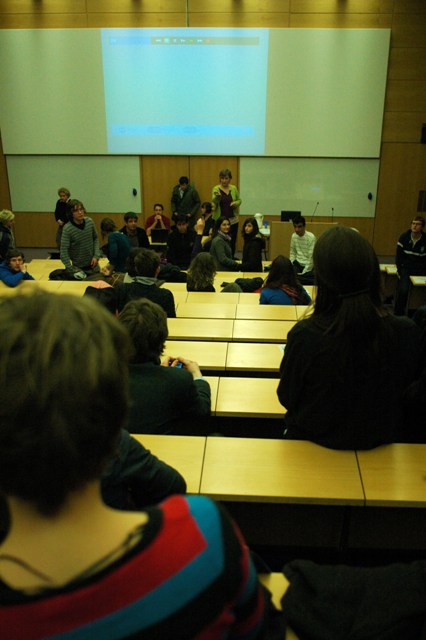 On the night of the 23rd January around 100 Cambridge University
students gathered to watch John Pilgers' film "Palestine is still the
issue". The film is touching, documenting the second Intifada, and the
continuing occupation of Palestine.

There was something special in the air: the film was followed by a
debate, on what can be done by students in the country to meaningfully
react to the situation in Palestine. The debate is still raging
around me. It is clear some were already set on a course of action:
occupations around the country have been blossoming and a plan is
discussed about taking the building and occupying it.

The arguments for and against are still raging: on one hand
occupations in other places were successful to get scholarships for
Palestinian students – a tangible outcome. On the other hand people
voiced concerns that an occupation should be the "last resort", after
demands have been put to the University. Practical problems of
advertising the action are also being considered, as well as how to
effectively hold the building.
The climate of fear about doing something wrong was slightly comical
for such a low-key action. People mentioned the threat of being
charged with "aggravated trespass" as well as getting in trouble with
the University authorities. The following discussion calmed those who called the
action "extreme", and laughter was heard as the action was likened to
taking hostages.

At the end of about an hour of discussion back and forth a vote was
taken, and a majority decided to take the building for the night, and
re-vote on whether to continue with the action tomorrow morning.
Teams of people moved swiftly to keep the doors open for access in and
out, and others started scouting for toilets and wi-fi access.

People are still arriving from other meetings, others have been
dispatched to bring food and blankets. If you want to do something to raise the profile of Gaza, your time has come! The occupation is on in the
Law faculty building, Sidgwick Site, Cambridge, UK.

for a map of the occupied building see:

A group of more than one hundred Cambridge students are staging a peaceful occupation of the Cambridge University Law Faculty in protest of the situation in Gaza. The action is in solidarity with similar occupations at more than a dozen British Universities across the country, at which students are making demands of their institutions. These include: scholarships for Palestinian students, donation of educational materials to rebuild the Palestinian education system, divestment from the arms trade, and full access of humanitarian aid to Palestine.

Students are currently drafting their set of demands which will be published on the blog, as well as indymedia, along with updates concerning the occupation.

After several hours of debate, the students participating in the Occupation agreed by consensus to the following demands:

1. We demand that Cambridge University issue a statement which condemns: Israel’s action in Gaza; the Israeli blockade of Gaza; and the continued Israeli presence in Gaza and the West Bank. This statement is to be issued in solidarity with international peace movements, in particular those in Israel and Palestine.

3. We demand that Cambridge University commit to a day of fundraising for humanitarian aid in Gaza within the next two weeks, as part of an ongoing commitment to financial support for the humanitarian crisis in Gaza.

4. We demand that Cambridge University grant a minimum of ten scholarships to Palestinian students every year.

5. We demand that Cambridge University and its colleges disinvest from the arms trade in cooperation with the existing Cambridge (and colleges) Against the Arms Trade movement.

6. We demand that no student will face punishment or repercussions, legal or otherwise, for participating in this demonstration.

The student body realise that the gears of University legislature are slow to turn, however morale remains high.