The US is slowly shifting its military needs towards Africa and Sudan in particular. While the Barack Obama administration will force the UN to declare a no-fly zone over Darfur, the US forces in so called peacekeeping missions will establish their bases in Darfur or Kenya and other surrounding nations in order to keep Sudan under its umbrella.

Clearly, the NATO will be brought in to support the US in its 'conquest' mission and its global strategy of controlling the 'energy' reserves across the African continent. 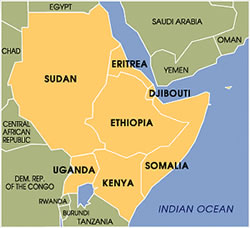 The US is slowly shifting its military needs towards Africa and Sudan in particular. While the Barack Obama administration will force the UN to declare a no-fly zone over Darfur, the US forces in so called peacekeeping missions will establish their bases in Darfur or Kenya and other surrounding nations in order to keep Sudan under its umbrella.

The main objective of the mission in Darfur and the no-fly zone over the region will be to slowly strangulate Sudan's economy and render it impossible for the Chinese to exploit Sudan's oil.
The no-fly Zone will be enforced by NATO forces that will be under US command.

On January 14th, the U.S. Air Force has begun airlifting Rwandan peacekeeping equipment and supplies from Kigali to the Darfur Region of Sudan as part of the United Nations-Africa Union peacekeeping mission.

Rwanda has four battalions of peacekeepers in Darfur, totaling 2,566 personnel, with a goal of increasing the peacekeeping force to 3,200, Rutaremara said. The Rwandan peacekeepers are assigned to the hybrid United Nations-African Union mission in Darfur, known as UNAMID.

The decision to airlift the equipment was announced January 5 by President George W. Bush as part of the U.S. government's ongoing support international peacekeeping efforts in Darfur.

With the massive movement of NATO forces across the globe from Afghanistan to Sudan and Israel the world seems to be heading for a massive conflict between the Americans and its allies and the rest of the world which comprises of Russia, China and most of the Muslim state. Included in the rest of the world are the 'socialist' states in Southern America indeed. Venezuela and Bolivia are also the target of a possible 'energy' squeeze in the Southern American region in which NATO forces may altogether be involved soon.

Following the Ukraine declared war on Russian gas, which signalled the beginning of the 'energy' war against non-US friendly states, the NATO is shaping up its 'future' war strategies with clear goals. The control of all the canals and straights that are not under US/allied occupation.

The Straits of Malacca will once again become the prime target of the US administration and will be used as a bargaining tool by the Obama administration to woo into the NATO helm countries like Indonesia and Malaysia, which are opposed to US or foreign troops and naval patrol in their waters.

The US – thanks to Defense Secretary Gates visit to Indonesia in 2007 – has already set a foot along the Straits of Malacca with the installation of at least 7 military radars (given free of charge to the Indonesians apparently). The radars has the capacity to scan the entire Malaysian, Singaporean and Brunei nations not withstanding large areas of Indonesia altogether. This has been seen as a risk to the integrity of the nations mentioned by experts in the matter.

To enhance its presence in Sudan and the surrounding regions, the US and the NATO command will wage the old and overplayed card of the conflict in Darfur. The US media is already claiming that the Obama administration will have to deal with the problem in Sudan where they say an estimated 2.5 million people have been displaced and 300,000 died, citing UN figures.

Since 2004, the United States has spent more than $15 million to airlift 11,400 peacekeepers and their equipment to and from Darfur and has provided more than $100 million to train and equip those forces, according to a White House fact sheet. Much of this support is coordinated through the U.S. Department of State.

From now on, the US will also count on the AFRICOM or the African Military Command set up at the Pentagon to deliver blows to the nations that are giving leeway to the Chinese and Russian nations. China has a long term deal with Sudan for the exploitation of its oil reserves. The China Oil Corporation was partners with Malaysia's National oil corporation Petronas in some of the operations over Sudan.

Sudan represents the most viable cheap oil alternative for the Chinese regime while the Russians are now in military partnership – short of an alliance so far – with Tripoli where the Russians will be building an extended and sophisticated Naval base for its warships. Sources indicate that the military agreement between Libya and Russia will eventually lead to an 'oil' and 'gas' deal between Tripoli and Moscow, a deal that may cause ire of Washington, Italy and the UK.

Strangulating Sudan over Darfur will not be of good news to Libya which is bordering Chad. Chad and Sudan were battling each other until last years peace deal 'brokered' by the Senegal during the OIC summit that took place in Dakar in March. The French are to play a major role in the future US blockade of Darfur, which will help strangulate the Sudanese regime and cutoff China's access to the cheap and easy oil finds (for the Chinese) in Sudan.

The domino effect of this strangulation strategy will lead to Libya being under pressure with a military build up in its backyard and one of its long time adversary Chad ending up being occupied by both French and US/NATO forces. Chad and Libya had a long conflict experience over a stretch of the desert land bordering the two nations. The area is rich in oil and was coveted by the French in the 1980's and surely the Americans of the Ronald Reagan era.

The heavy NATO presence in Chad will definitely re-ignite the conflict between Chad and Sudan while light armed Somali Islamic fighters may want to hit the NATO on its vulnerable flanks in the vast African desert land in order to disrupt its operations to strangulate Sudan. There is little wonder which states would end up supporting the brave Somali fighters into enlarging the conflict in the region. The aim of such an escalation will be to achieve two goals: An arms race in the region that will allow Libya and Sudan to acquire additional weapons. This will also allow the Islamic Courts and the militias in Somalia to be re-equipped. And to destabilize Kenya and the southern Sudan region further in order to give the NATO a real military headache that will probably force it to miss its target of 'killing off' the Sudanese regime.

While it is obvious that the recent US 'surge' in peacekeeping efforts (see attempts at conquest of African states instead), the US want to consolidate its US. Africa Command that was formally activated on Oct. 1, 2008. This will remove the US European Command, which had responsibility for Africa prior to the activation of U.S. Africa Command, from duty since the EU command will have to concentrate on Ukraine and on how to push further the idea of strangulating and suffocating Russia's energy business.

A statement by a US military spokesman on the US Africa Command says the following: "The U.S. military has been working with African nations for years," said Vince Crawley, a spokesman for U.S. Africa Command. "The command wants to add value to what the U.S. military has been doing; that is helping African partners develop their security capabilities in order to promote security and stability throughout the continent."

Clearly, the NATO will be brought in to support the US in its 'conquest' mission and its global strategy of controlling the 'energy' reserves across the African continent.