Anti-arms acticvists do it again!
FOR IMMEDIATE USE: Cornwall Arms Factory Disrupted

This morning, activists from Stop Kernow Arms Trade occupied the roof of Helston Gunsmiths, a company who manufacture tanks & small arms, to highlight the irresponsibility of the arms trade.

In 2007, the UK sold weapons to 11 of the 13 countries identified as being locations with at least one armed conflict in 2006. Helston Gunsmiths were involved in supplying guns to the Iraqi police force which ended up in the hands of Al Qaeda. It's hard to determine where weapons will eventually end up, and arms manufacturers have a vested interest in keeping things this way. Around 90% of casualties in armed conflicts are caused by small arms, which are used for domestic repression by corrupt regimes and prolong violent conflict.

We climbed on the roof at 7am this morning and hung a banner reading 'No to Cornwall Arms Dealers.' After a couple of hours we had spoken to quite a few local reporters and, figuring we'd made our point, decided to climb down as there were only two of us.
We don't intend this action to stand on its own - we hope to kickstart a campaign in Cornwall which is sadly lacking in activist activity. We have an arms manufacturer and a university (Exeter Cornwall Campus in Penryn) rumoured to invest in the arms trade on our doorstep. 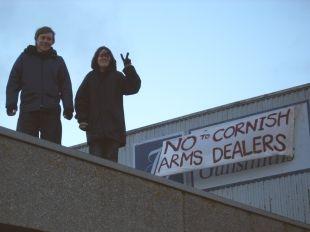 "You're trespassing!" - That's aggravated trespass to you! 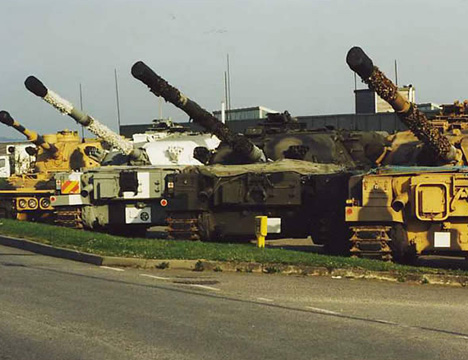 Photos from the action