Today the Stop the War Coalition called a protest outside the BBC. The demo was about the BBC's unfortunate decision to give everyone the impression that they are quite frankly racist. If an earthquake struck Tel Aviv would the BBC refuse to show aid appeals in a bid to appear unbiased? Or is this just a commercial decision? Are they worried about how their ratings might suffer in Israel and the USA if they dared to help a mere 1 million people who have no electricity and clean water due to the war crimes of Israel? Cowards!

On a lighter note this appearance by Tony Benn on the beeb is fucking hilarious: 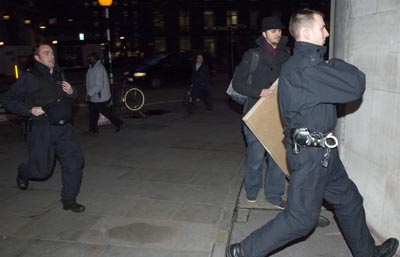 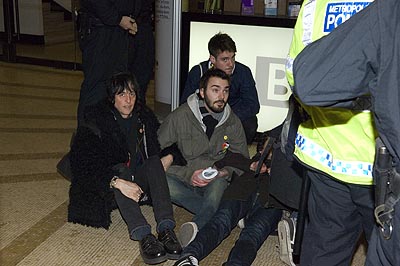 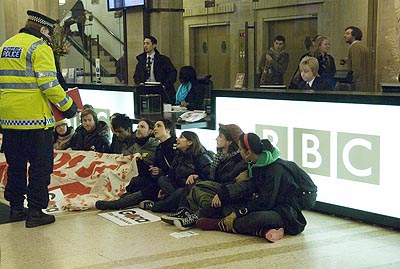 And so the delicate negotiations begin... 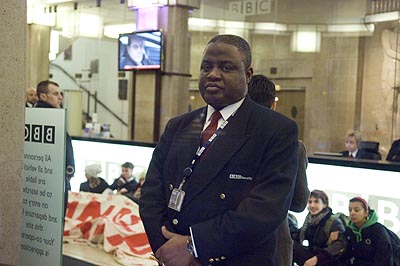 ...while the delighted security guard relishes his moment of fame. 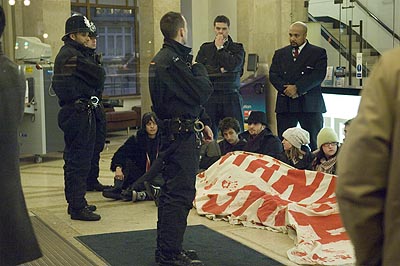 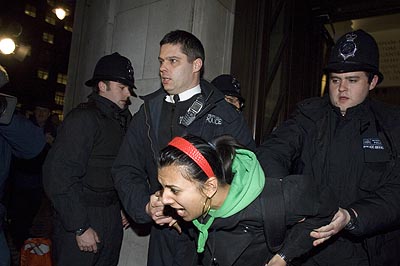 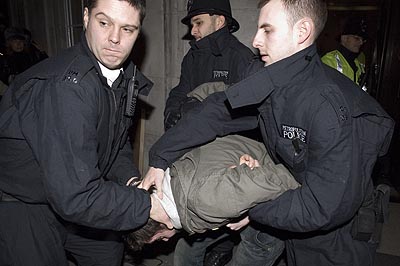 ...mindful of the importance of that 'softly softly' approach. 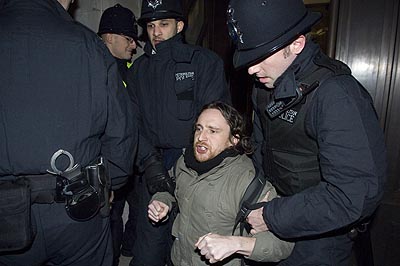 Until every last critic of BBC racism... 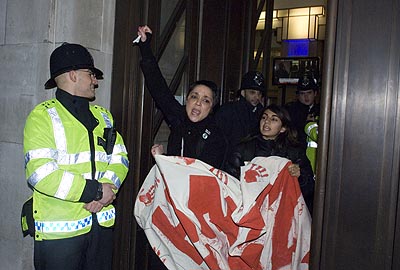 ...has left the buidling. 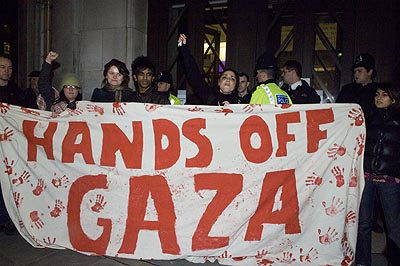 They continue outside. No arrests.

Those who arrived early for the demo decided to take their representations in person to the lobby of the building. Parked outside the entrance was a van load of Policemen, who unlike the journos present, managed not to notice around 20 people with placards and a banner walking into the main reception. Fortunately for the Police (and the beeb) the invaders were mostly students and peaceniks without a single Hamas militant or suicide bomber to be seen among them.

So upon arrival the protesters were told that the Director General was unavailable for comment so they decided to sit down and wait for him. At this point several bewildered cops burst in and proceeded to throw the press out and have one of those awkward conversations with the regular residents of the building about what to do next?

One particularly comic moment occurred when a BBC camera crew showed up and entered the building having shown their BBC passes to the Police to get in. They were then promptly thrown out by their own security despite the obvious editorial control which the beeb would have over whatever they shot. Or were they just worried that it might end up on You Tube?

A call for a mass non payment of the TV Licence to the BBC. Pay money to the Gaza appeal instead.

Why should we fund these fascist, racist, fat cats and the nonetities such as Jonathon Ross who are paid disgusting amounts of our money?

Those who have a TV should consider getting rid of it. Time better spent on planning action!

Well Done to ALL Who Took Part

Great job! It has got some coverage in the main stream media and more to follow.
We need to promote other channels such as PressTV, Aljazeera, Almanar, AlAlam, Ramattan, Alarbiya. MORE AND MORE Non muslims, non arabs are watching AlJAzeera english now.

EVERYONE should watch the Tony Benn video posted at the top,

It was so encouraging to see/hear the clarity and determination of Mr. Benn, may we all grow old and still keep our wits and power as he has done!

Proof the BBC reporting is racist

Congrats to all, but I still don't understand why no one is targetting TV Centre (you're pictures are of Broadcasting House), that is where the televison cameras and all the big journalists are.

http://news.bbc.co.uk/1/hi/world/middle_east/7852745.stm - headline 'Israeli soldier killed in Gaza'. No mention of the dead Palestinian until a very long way down the article. Full reimposition of the seige not mentioned until even further down. Where as tales of the wounded Israelis are in the first paragraph. (Unless its changed since I wrote this at half past 1.) 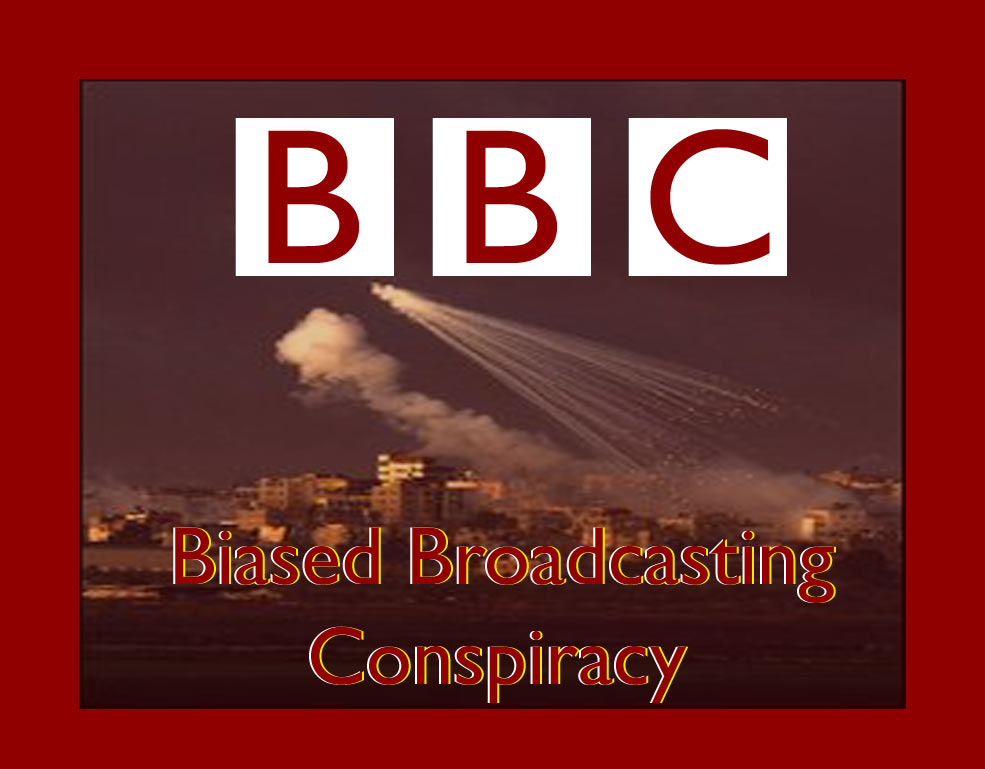 Brilliant !!! I was so disgusted with BBC's coverage of the Gaza Massacre, I was hoping people would protest, I'm not in the UK.

BBC on BBC snub by IAEA

The head of the International Atomic Energy Agency has cancelled interviews with the BBC over its decision not to broadcast a charity appeal for Gaza. Mohamed ElBaradei believed that the BBC's decision broke "the rules of basic human decency", his spokeswoman said.