Milano-Let’s take back Cox 18, the Calusca Library and the Primo Moroni archive!

[Milano - Italy]
The 22nd of January 2009 at 7.00 am, about a hundred policeman has entered and cleared out the Cox 18 - Conchetta Squat, occupied more than 33 years ago, where has place the Calusca library, created in 1971, and the precious and historical archive Primo Moroni. 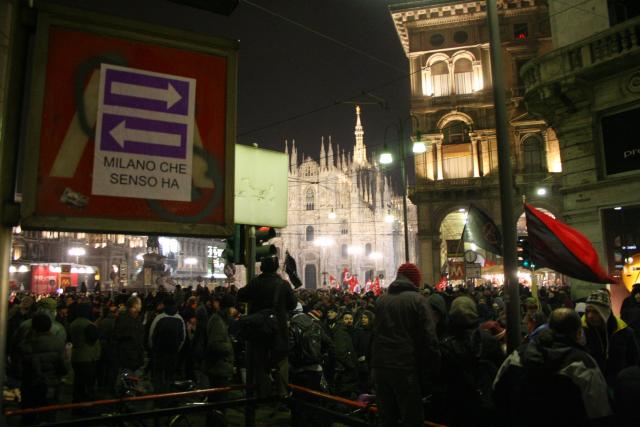 The city’s response has been immediate, and in a short time a lot of activists, friends, and people from the neighbourhood has gathered in front of the police forces.

It is clearly an illegal intervention that doesn’t take in consideration the fact that there is an ongoing trial for the suit the municipality has made against the squat in July 2008 to take back the
building.

The vice-major De Corato, ever since in front line against all non conformed realities in town, has shift the blame for the operation on the police commissioner and the prefect. The public attorney claims that he has been informed after the operation had taken place. It doesn’t really matter, as everyone agrees that the real mean of the operation is that the municipality wants to avoid losing the building, and the precious land on which it is built. It is a purely economic reason, as if this could be enough to justify the whole thing.

The result, so far, is that the Squat is sealed off and seized with all the files inside, including the books and the magazines of the library and of the archive. Conchetta Squat, the Calusca Library and the Primo Moroni Archive represent an important piece of the town’s history, as they represent a proof of the existence of realities that refuse to conform to a profit-seeking mentality. With them, many other squats, free entrance and free trade places. Their survival represents the survival of the freedom to act, to become masters of our own destiny and to not be classified only based on how much money we can and want to spend.

In our opinion, the match is still open and we will refuse to be conformed to the dominating profit-seeking mentality.
They want us conformed, buyers that can be bought, ordered and consenting, but we will remain what we have shown to be: original, communicative and not conformed.

We ask everyone to take part to this path, that is everyone’s path.