maria gallestegui has begun her third week without food, in solidarity with the people of gaza.
today she took advantage of socpa legislation to exercise her right to protest behind the gates inside downing street as the cabinet turned up for their early morning meeting at number 10.
there has still been no mainstream coverage of her extraordinary protest

socpa legislation allows a protestor to stipulate their own time and place to protest within the entire socpa zone. there is no exception in the law for the secure area behind the gates at downing street, and given notice of a one-person peaceful demonstration, the police have no lawful excuse to prevent it.

so, maria, (who regularly visits number 10 on this basis to hand in petitions of signatures she collects in parliament square), began her 16th day of hunger strike with a walk up to downing street, where she stood for two hours as the cabinet came and went from number ten.

this short filmed interview is available in two formats for ease, and maria explains what her protest is about, and why she feels moved to such extremes by the plight of the palestinian people.

meanwhile, despite mainstream cameras at downing street this morning, her vigil is yet to impinge on the british public other than via alternative and internet-based media.

the silence is deafening.

pic from inside downing street 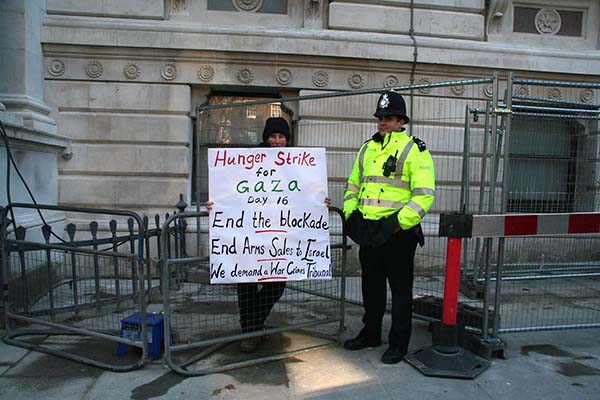 maria in downing st with minder