Some thoughts reflections and the nature of impartiality, in this context - heavy warring from Israel and rockets from Gaza and reluctance to aid the injured and desolate due to the issue of impartiality - well an attempt ( im partial to doing it ourselves anyway). 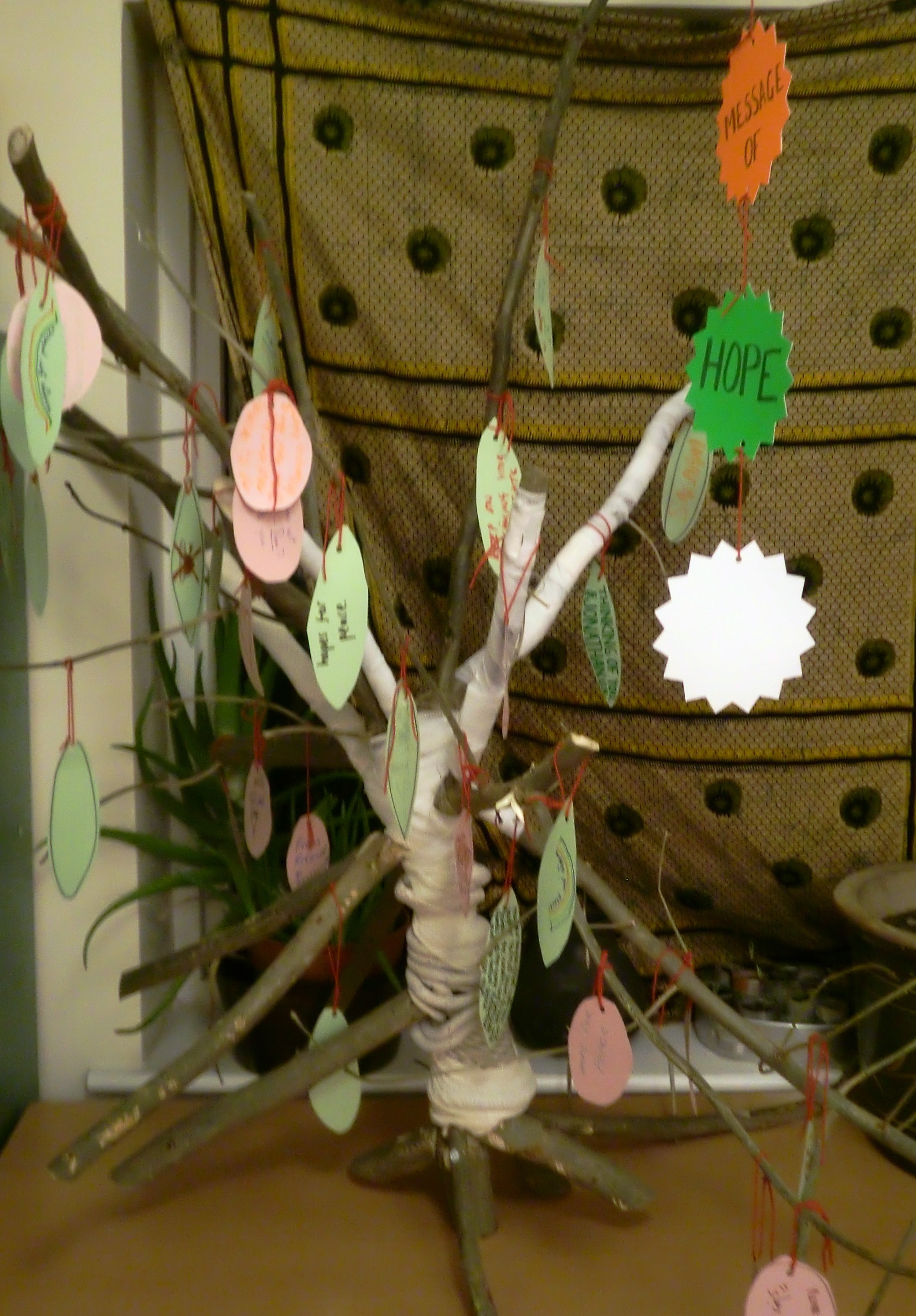 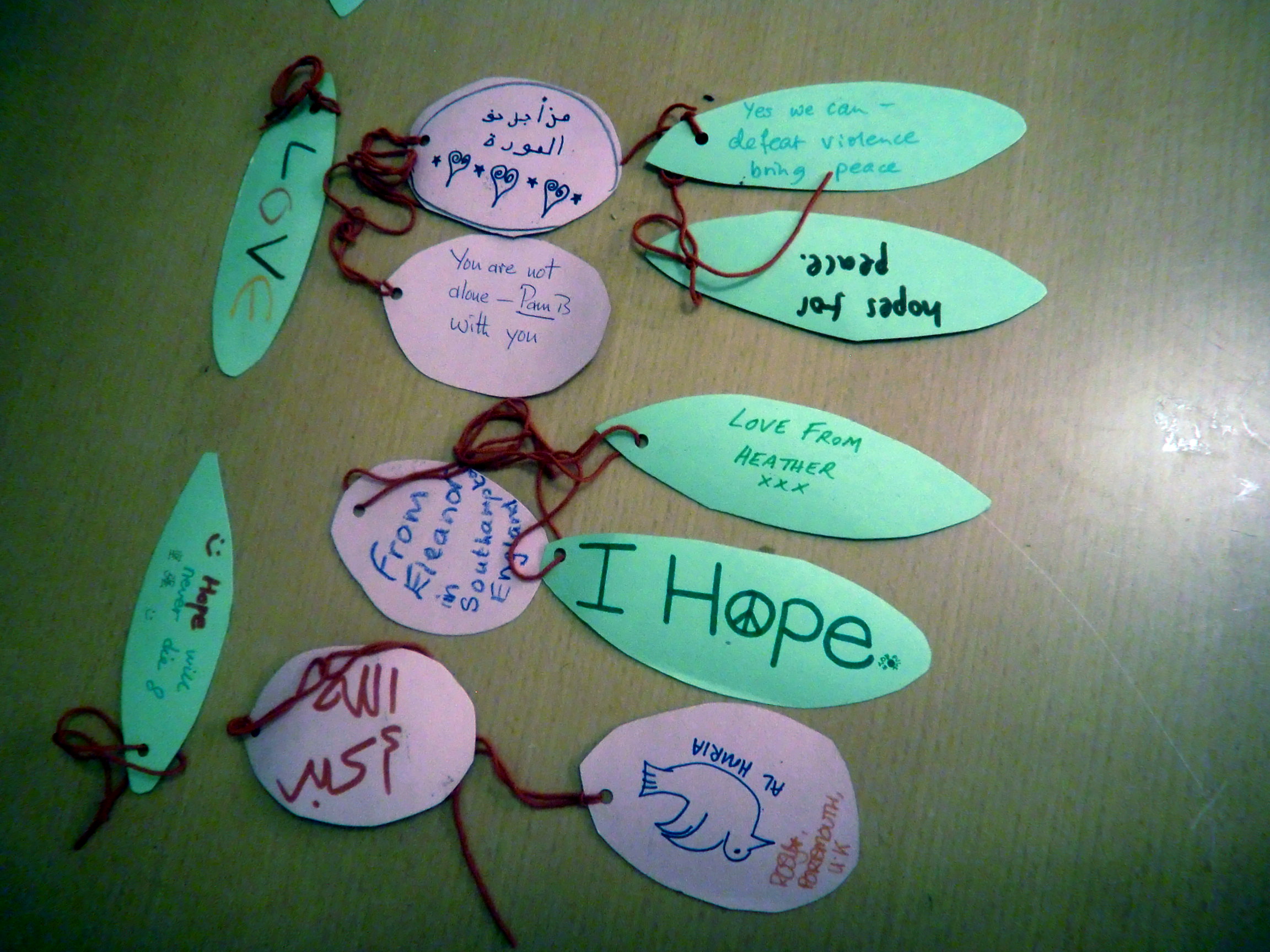 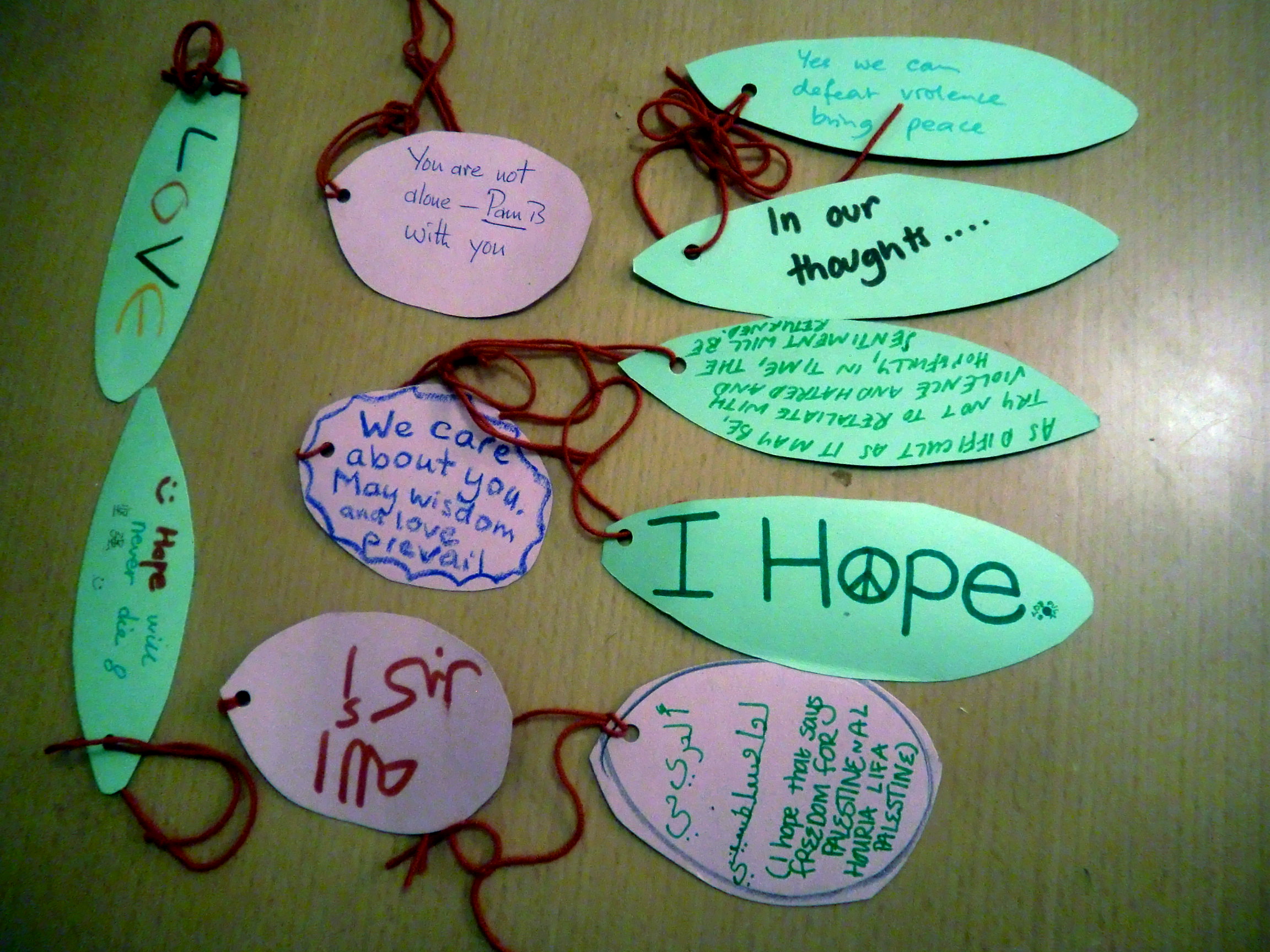 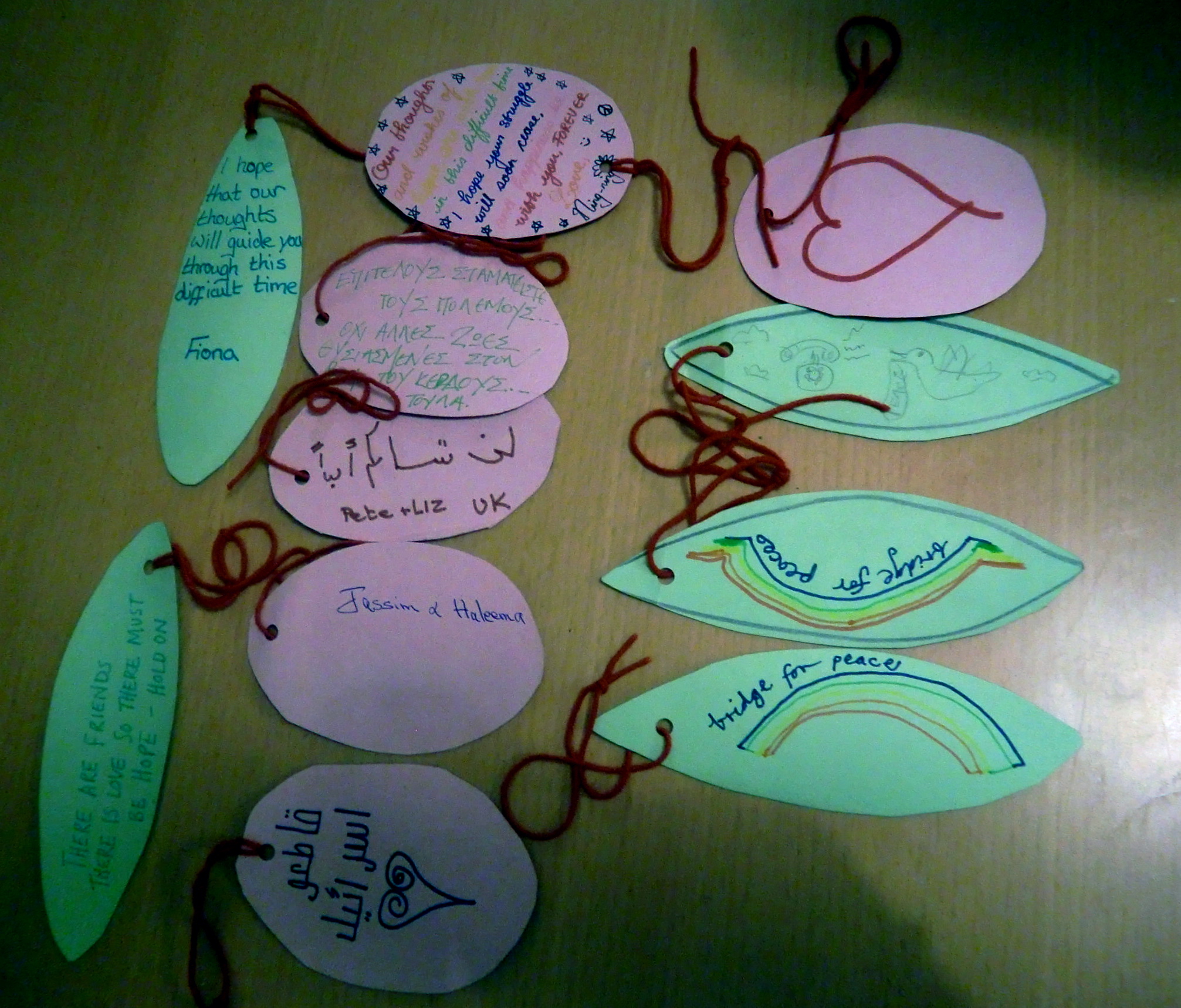 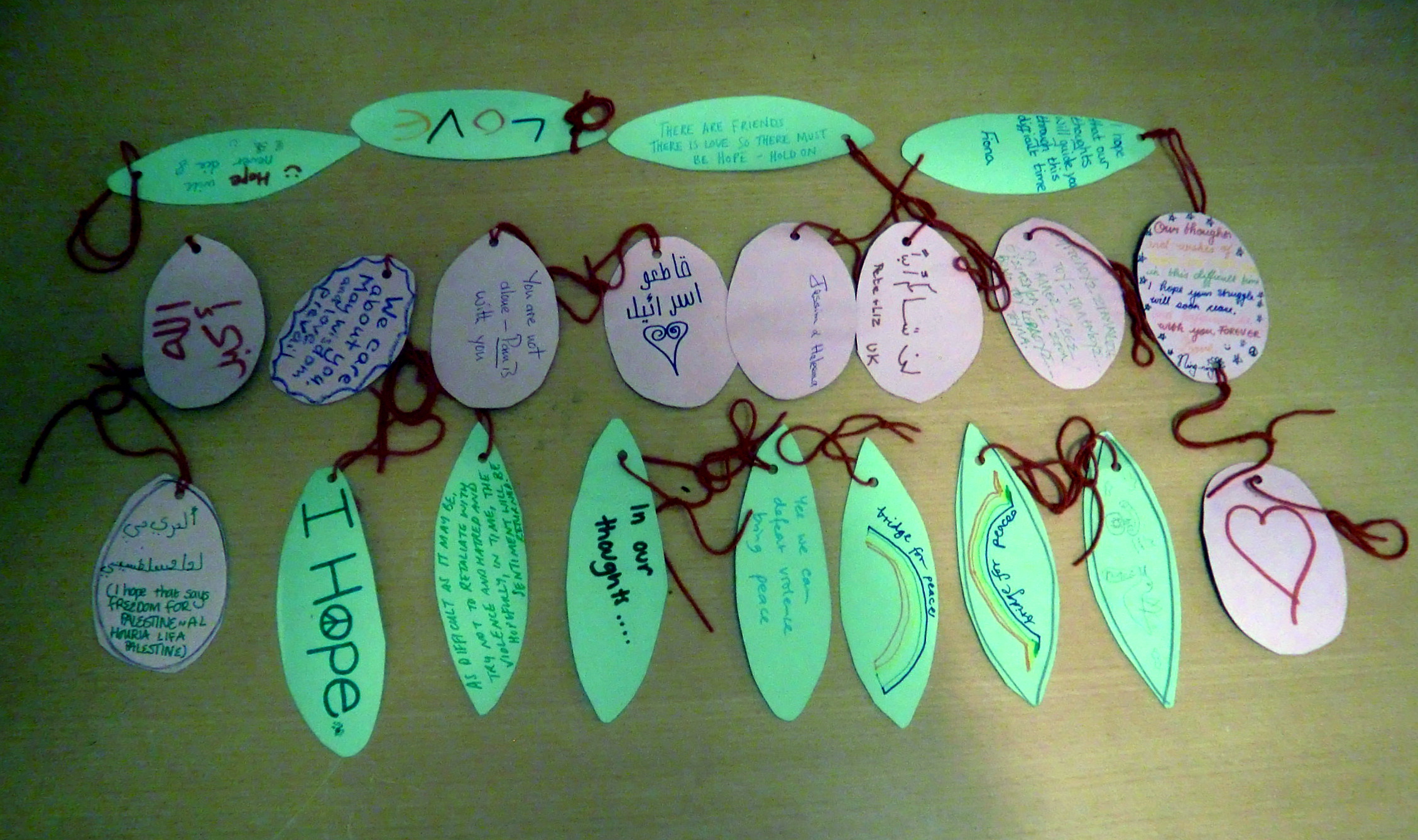 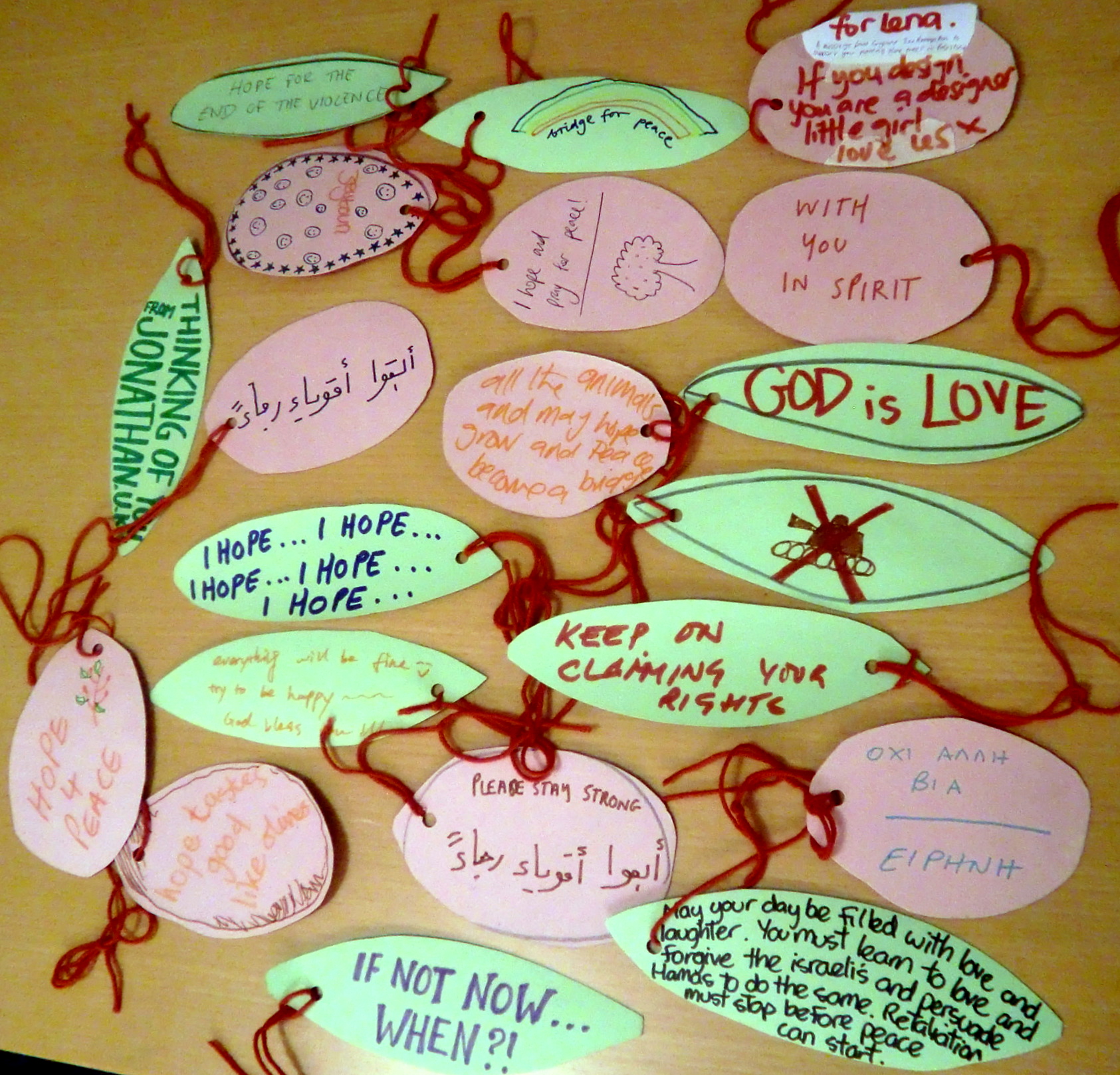 I hope that you are well and that you have received the photos I sent for you please forward to people in Palestine you may have contact with.

Here are the last of our pictures from Southampton, (england), they are the individual messages written on leaves and olives from the hope tree at the first Hope Happening Palestine Cafe event. I have some thoughts and reflections too, and they are my thoughts - they are not to tell you how to think (please be clear on that - we need to think for ourselves).

Some messages are on leaves shapes and some are on olives shapes - some are in english, danish and swedish as well as chinese and others in arabic - none sadly in hebrew if only we had time we could have sent you some in hebrew - for I know there are jews out there who would if they could send you hope messages in hebrew. None turned up this time to write at our Hope Happening event - I will keep the option open at all times for people writing in hebrew to write you.

We (some of us) plan to, plan to have further events to promote the olive tree sponsorship - let us know if there is anything more we can do from Palestine - that would specifically assist (we will try to incorporate ideas and proposals in planning if we can). This time our thoughts about having audio/video messages did not work out at all - we might revisit that one next time (inshallah). Obviously, this endeavour (getting sponsors for olive trees) is aimed at the longer term, though in the short term Olive Tree planting seems a way of proactively resisting the occupation - what if nonviolence is utilised in creative and nonprotesting ways with international support ongoing for sponsorship and accompaniment? Would this be impartiality - I say no.

I have been reflecting on recent events and you may have heard that here in the UK; the BBC, Sky television and one particular rabbi's wife (though many other people shared her view in Southampton and across the country) - shouted at differant times 'impartial' and / or 'partisan' when they thought about fairness and equalled reporting of all events from Palestine and Israel in recent days and here also.

These organisations and individuals were perhaps trying in some way to think that they needed to be fair and that it is best and safest position to sit upon - this place of impartiality and nonpartisan-ness. This fence of 'impartiality and being nonpartisan reporting was a place to be 'fair and nonjudgemental' they declared when challenged and they stayed put.

Of course events turned quickly day after day, ceasefires and rockets, then UN buildings bombed, DIME weapons and Phosphorus weaponry spewing the Gaza skies and its people below. And, and ...so the the bulk of the harm, and the majority of the bombs fell, and the masses of the people died and fell in Gaza (1000+ dead in all). One life matters - and 13 lives matter and larger numbers (1000-1300 last count I saw) all matter because they are multiples of one - no other reason! Hope for humanity lies in where we bother to place our ass, where it is most needed (not on the Impartial or Nonpartisan Fence).

The Israel Government and the IDF-like automaton pawns act out of paranoia and swipe dangerously with their war tools, difficult behaviour and disturbed bahaviour to us all looking on - well some of us. Some cant help remember the rockets from frustrated occupied groups in Gaza that are largely ineffective more like a adolescent in a paddy / mood at being stopped from going out at night. All who look on both these acts might see disturbed bahaviour though of course its the lack of emotion that is most worrying.

Being disturbed forces us to decide about what is fair how to be impartial? They are however not two similiar acts, not mirroring behaviours at all and so cant easily be compared. Why because of context - context. So we need to therefore be partial - to be biased towards the softer, frustrated, feeble response not the harsh, calculated and fearless force in this case. To be for life is a biased stance, and impartiality in this context is irrational and undermines the quality of one which I mentioned earlier.

'Other Israeli's, though are clearly partial to positioning themselves off, and away from the fence alongside the oppressed ready to work with and for the destitute of Palestinians in creative nonviolent resistance to all things oppressively dominant from Israel until what will be equalised will be kindness and equality from Israel - yes I know some hope comes from 'other Israeli's' too - many people dislike to hear this. So, not supporting the raising of awareness for the Disasters Emergency Committee campaign to rebuild, send aid monies for Gaza because they claim to do so is an impartial act - a partisan act yet its noncompassionate politics.

Compassion is called for on a large scale in Gaza and compassion-minded people will see the need & suffering and respond - in doing so they are being impartial in another type of way. We do not need to rely on the approval, the sanctions of the BBC, Sky Television or the rabbis's wife or anyone else to make us respond to Gaza's need - we must not look to this type of low qualitypower-media that tries to squash real love - it will not be squashed and it is not in this case impartial.

Love and Saalam and ShaLoM