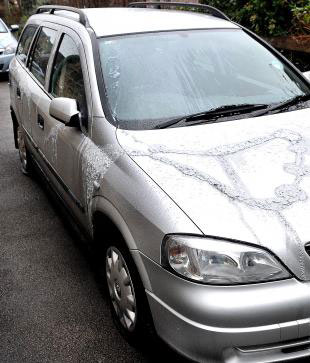 "Persons unknown recently visited the property of self serving Councillor Anne Hawkesworth. The two cars in the driveway were paint stripped and had their tyres slashed.

The entire council is responsible for choosing to turn Ilkley Moor into a blood bath. Doubtless many will be queueing to spectate when the shotguns come to blast these birds out of the sky. In the meantime the moor will be managed in such a way as to promote the growth of grouse, while terminating the existence of many of their predators, who have an equal right to exist in this habitat.

We have already called for Ilkley Moor to be a wildlife haven, and have been ignored. This is the use of public land to allow the 'fun and games' of a few sadists led by Ed Bromet (Bingley Moor Partnership) and is, as we have said, completely unacceptable.

"On the night of January 25, a major poultry business was attacked by the Frente de Liberación Animal de Puebla, México.

Its logo, white walls, shutters and its canvas advertising signs were covered with automobile oil; also written on the walls: 'Meat is torture,' 'shitty speciesists', and 'we are going to burn you.'

Sabotage is a method, the destruction of their order is our end!

FIRE TO THE FUR INDUSTRY (Uruguay)

"In the early days of January we warned a fur shop located in the vicinity of downtown that we reject their business for being based on animal exploitation; we grafittied the windows and walls of the place with words and phrases referring to animal liberation .... ....
The following week the location was continuing to sell the remains of dead animals as if they were clothes, so we decided to pay another visit, throwing paint bombs at advertising posters at the entrance.
The business remained open so on one of the nights last week we decided to enlighten the place with the beautiful flames of freedom ..............
The windows ended up completely destroyed due to the heat and a considerable amount of merchandise was damaged by the fire; we also dropped leaflets announcing our rejection of any form of exploitation

fire to the fur industry!
fire to everything that oppresses us, other animals and the earth !!!!!!

"21 january 2009 - Lecco (Italy)
According to local media two stores of Max Mara Fashion Group have been damaged during the night. Red and black paint has been thrown on one Max Mara and one Marina Rinaldi store in the city centre. There were also slogans painted, that the workers had to work all morning to remove."

"In the night of January the 25th one of the headbuildings from the WAGENINGEN UNIVERSITEIT (NETHERLANDS) has been tagged bij ALF members.
This was to make sure every last person within the university knows what is happening down there.
15.000 TORTURE DEATHS A YEAR!
We left names of specifik animals being tortured at the WAGENINGEN UNIVERSITEIT and of course the number of 15.000 and some ALF tags.
NO ONE WITHIN THE UNIVERSITY OF WAGENINGEN CAN SAY THAT THEY DIDN'T KNOW ABOUT THIS,
THERE HAVE BEEN ENOUGH WARNINGS!!!!!

We call on the help of every other ALF cell that is active in and around the Netherlands. HELP US, THIS HAS TO STOP NOW!

FREE THE ANIMALS FROM THESE SICK FUCKERS WHO CALL THEMSELVES SCIENTISTS!!

"One night in the first weeks of January we decided to decorate the zoo in Villa Dolores. On the gates of this jail, we graffitied LIBERACION ANIMAL and launched several red paint bombs on the huge, three-dimensional ZOO sign, while at the same time we stained the walls and floor of the place with several liters of red paint. We also sealed the locks with glue and threw several leaflets explaining why we reject this space.

BRING DOWN THE WALLS OF THE PRISONS AND ZOOS!!!!
FOR THE DESTRUCTION OF ALL FORMS OF AUTHORITY!!!!!!!!

"Cortenuova, Renate (MI) - Italy - November
9 singing birds used by hunters have been freed, their cages smashed and spraypainted slogans left in the hunting cabin. Some rifle bullets have been found and damaged too.

"In the early morning hours of January 23, a KFC in the State of Mexico was attacked; paint-filled bulbs were thrown on the walls and windows, graffiti covered the building as well, such as 'Multinational killers', 'torturers' and anarchist symbols, also the billboard of junk food that hides the animal suffering and pain that KFC sells has been painted and one of the lamps shattered.

If they generate destruction, the FLA will respond!

"On the night of January 14 the FLA of Mexico set fire to the shutters and an advertisement at a meat company in Mexico State. The fire spread and a cloud of smoke covered the small business, as the target was reduced to ashes.

We're not going to stop these attacks. The flame of animal liberation is unstoppable!