Bayer Day of Action in Cambridge

In support of the Day of Action against Bayer, activists visited their offices in Building 230, Cambridge Science Park, Milton Road, Cambridge, CB4 0WB. 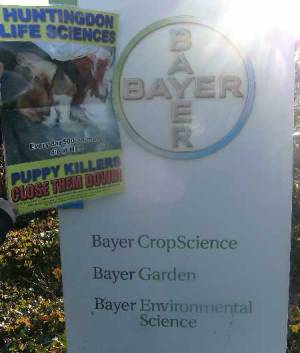 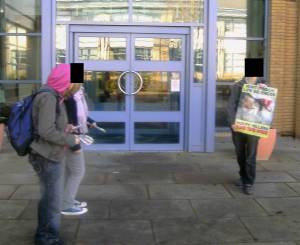 Armed with posters and leaflets the group set about informing employees of Bayer and adjacent companies about the disgusting experiments that Bayer are responsible for at HLS. The activists also informed workers and passers-by of Bayer’s record of exposing human beings to HIV infected drugs. (See MSNBC report:

http://uk.youtube.com/watch?v=PR7V-rCTnjw ) dispelling the myth that Bayer cares about genuine progress or human health.

Staff at Bayer ran and locked the doors, despite the fact the activists have been there for minutes before and clearly had no intention of entering the building, this resulted in a delivery being turned away even when told by the delivery person they would be unable to re-deliver!

Bayer employees took photos of the campaigners through the door and from an upstairs window. The campaigners put leaflets on a number of cars in the car park to let the workers know what they are supporting. Completing the protest activists left, but plan to return shortly. Clearly no amount of state repression will ever stop SHAC or the animal rights movement.

In solidarity with the UK SHAC7 and all animal rights prisoners worldwide.