A sizable group of Nottingham students have tonight occupied a large lecture hall in the Law and Social Sciences building at Nottingham University. This action appears to be both in solidarity with the people of Gaza, and in defence of students' own right to protest and free speech, and students have already indicated a number of demands for action on the part of the University. 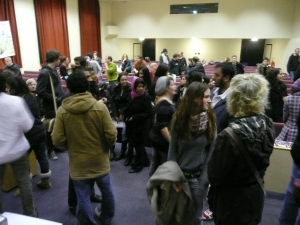 At around 9 O'clock this evening, around 70 students 'from a range of backgrounds', entered and began an occupation of a lecture hall, known as B62, motivated by the ongoing and escalating crisis in Gaza.

Callouts were immediately made for support, both to the student community to join the occupation, and for supplies of food and water. An early statement has appeared on a blog site set up to carry reports by the students (

http://occupationnottingham.wordpress.com/), with a draft of a set of demands which will be made of the University's management.

The demands include that the university of Nottingham cut its financial ties with the arms industry, that 'academic' aid be sent to Gaza, and that there be no legal, financial, or academic repercussions taken against anyone involved in the occupation. The occupation is set to continue until at least until the students' demands are met, which also entail their free movement in and out of the occupied space.

The occupation took place without impediment or damage occuring. One student said 'We plan to organise speakers, events, food and music. However, we are not going to disrupt any lectures.' This occupation is the 17th in the UK since the New Year. Others institutions occupied include the School of Oriental and African Studies, the London School of Economics, King’s College London, Birmingham University, and Warwick, Sussex, Oxford, Manchester Metropolitan, Cambridge, Leeds, Newcastle, Queen Mary’s, and Bradford Universities.

We speak to four students about their experiences on the first night of the occupation of room B62 in the Law and Social Science Building at University of Nottingham.