ICRC Have confirmed hundreds of innocent civilians have been killed since the weekend. The Sri Lankan government have been firing multi barrel rocket launchers into the densely populated area, agreed by the government as the safety zone. 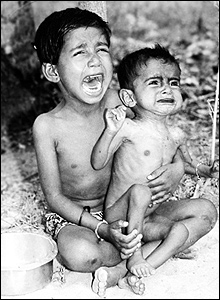 The Sri Lankan Government is currently engaged in the ethnic cleansing of the Tamil minority, they are using food and medicine as a weapon of war against the Tamils and the international community is just turning a blind eye.

A war that most people don’t even know about a war not so different to Vietnam, the indiscriminate bombing of innocent civilians, schools, temples, orphanages, refugee camps and hospitals.

The Government of Sri Lanka has removed all International Volunteer Organizations (INGOs) out of northern region where the conflict is taking place and as the Government does not allow any International Media into the area there are NO WITNESSES of the ongoing genocide and the unfolding humanitarian crisis.

ICRC Have confirmed hundreds of innocent civilians have been killed since the weekend. The Sri Lankan government have been firing multi barrel rocket launchers into the densely populated area, agreed by the government as the safety zone.

Thousands of people have also been seriously injured the hospital say they can’t cope and have requested emergency medical supplies, of which without many more hundreds will die of their injuries, but so far the International Community have not responded.

Speaking in Geneva, the ICRC's head of operations for South Asia, Jacques de Maio, said the civilian population was paying the price for the conflict.

“We talk about approximately a quarter of a million persons who are fundamentally trapped in a very small restricted perimeter - 250 sq km [96 sq m] - which is the theatre of very intense combat," he said.

The ICRC have based its figures of hundreds dead on body counts by its staff in local hospitals. On Tuesday ICRC wanted to evacuate 200 critically wounded people but did not receive security clearance they said those patients, now face death. It is now Wednesday night and many of the wounded have died, as they were not given a safe passage to the hospitals in the government-controlled areas for emergency medical assistance that they needed.

International media have also been denied access in Gaza, but the international news agencies are airing the reports done by local media and using their footage but not in Sri Lanka - WHY?

Please watch the following YouTube videos, which were filmed at the beginning of the week and have been shown to the British government but no action has been taken.

Please send the following links to everyone you know.

Please join rally this weekend to show your support only when the general public shows concern will the politician act.

Aid agencies fear tens of thousands could get caught in the crossfire in the coming weeks so please act now before it’s to late.

Please join us in a peaceful protest this weekend

PLEASE FORWARD TO OTHERS AND BRING EVERYONE OF ALL AGES ALONG.

Please join our campaign on our Facebook group: Act Now: stop the war in sri lanka

Please copy and paste this article and forward it to everyone you know all are welcome to republish it.