Update on the University occupations in solidarity with Gaza. 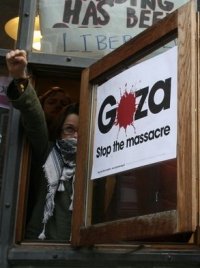 Students across the country are holding occupations and sit ins in solidarity with Gaza. SOAS shut down a MOD exhibition and kicked off military recruitment off campus whilst students at LSE declared victory after seven days when the university agreed to all of their demands. Nottingham students occupied a room in the law and social sciences building on Wednesday 28th; the University has cancelled lectures in that room, against the wishes of the students, and shut off the power to the room, despite support for the students' actions from local shops and MPs.

With support from trade unionists and the Stop the War Coalition, students at Sheffield Hallam also occupied a lecture room on Wednesday. Students at Queen Mary University, London, took their space on Tuesday 27th. On that same day, around 100 Bradford students stormed the university boardroom, and had their demands met within 24 hours. Students at Essex took a room on January 16th.

Over 80 Oxford students occupied the Bodleian Library, forcing the University to make concessions within 12 hours. The Warwick sit-in has been the longest so far, lasting from the 20th - 30th: negotiations with the University continue. Meanwhile, Cambridge students occupied the Law Faculty from Friday 23rd - Thursday 29th, against University intimidation and in the context of support from MPs and academics. Manchester Metropolitan University occupied a lecture theatre for 24 hours till Friday 23rd, enduring similar tactics of intimidation as in Cambridge.

From the 20th - 27th January, students at Sussex took a lecture theatre and entered protracted negotiations with the University, eventually forcing concessions to be made. Students at Birmingham were forced to leave their occupation after 12 hours due to the exceptionally heavy handed position taken by the University bureaucracy. Leeds students occupied a lecture theatre from Thursday 22nd - Thursday 29th. There have also been rumours of actions at Manchester University, Newcastle, Salford, Kingston & Bristol.

The occupations have attracted wide support from unions, many eminent academics and a few courageous politicians.

The student occupations have not been in isolation. Occupations have been taking place in different arenas including the NUS conference and BBC headquarters in both Glasgow and London. These occupations all give confidence to other people to do similar actions themselves.

The Leeds occupation wasn't in a lecture theatre but a 4 story building and it didn't end untill today Friday 30th January.

Solidarity with all other occupations, past, present and future.