After spending six months in Gaza and Cyprus working tirelessly to defy the Israeli blockade of the Palestinian territory and defend Palestinians from military attacks, two San Jose residents found upon their return that the protests that they had helped start had mushroomed a hundred-fold in response to Israel’s invasion of Gaza. 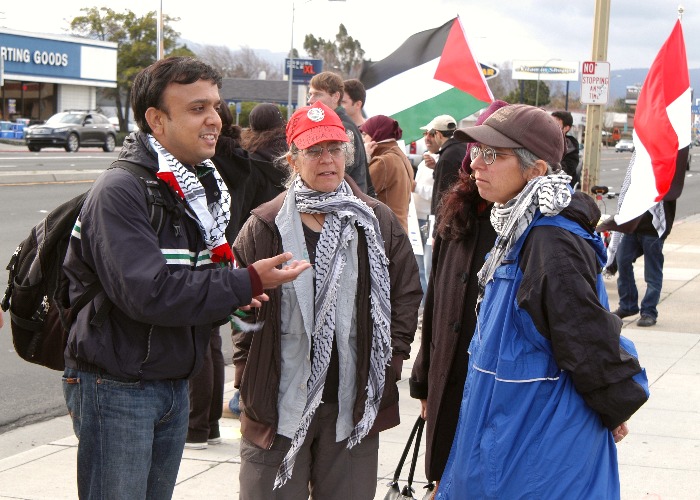 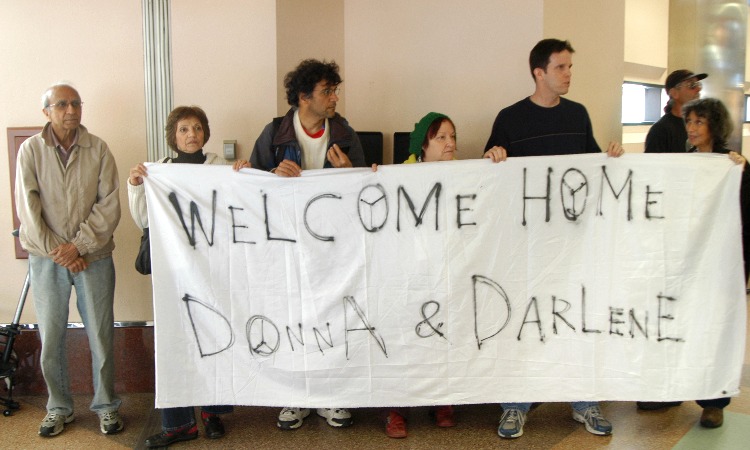 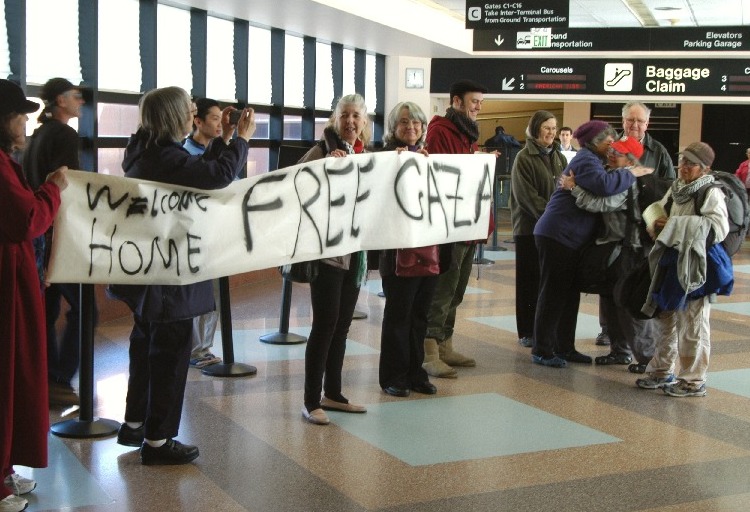 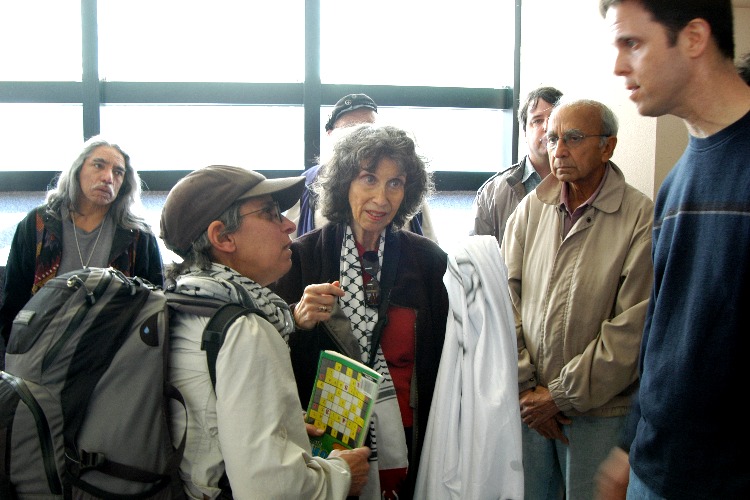 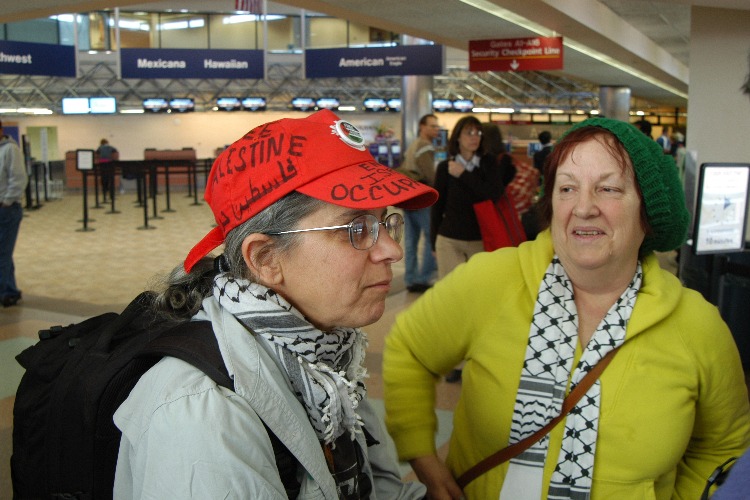 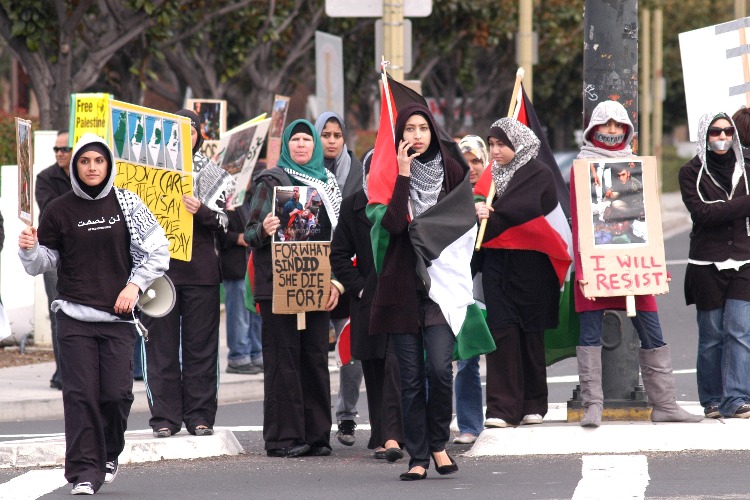 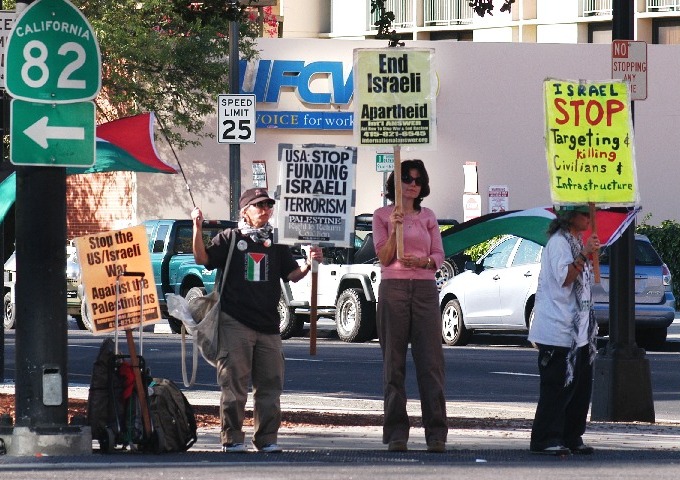 Two American Jewish women, Donna and Darlene Wallach, left their lives behind in San Jose, California six months ago to break the Israeli siege of Gaza. Courageously sailing on the first two Free Gaza boats, SS Free Gaza and SS Liberty, they had no idea of their fate at the hands of the Israeli navy, which has maintained a total sea blockade of Gaza since the 1970s.

“We had no idea that we would ever reach Gaza. We were preoccupied with what we would do if the Israeli navy stopped us,” Donna recalled.

But after many threats and much intimidation, the Israeli government backed down and let them through. Intense pressure from some European governments like Greece and Cyprus helped. But it is probable that some behind-the-scenes advice from the U.S. government persuaded the Israelis to avoid the adverse publicity of a confrontation in the midst of the U.S. presidential election campaign. On August 23, 2008, the two boats sailed into Gaza Port to the ecstatic cheers of tens of thousands of Palestinians who lined the docks and crammed into boats to receive them.

On Sunday, January 25, 2009, the two sisters arrived at Mineta San Jose International Airport to a heroes’ welcome. Some two dozen friends and supporters greeted them with banners and hugs as they emerged from the security checkpoint.

Darlene recounted her abduction at gunpoint by Israeli navy commandos on November 18, 2008 while she was accompanying Palestinian fishermen 7 nautical miles off the coast from Deir al-Balah. This was beyond the arbitrary 6-nautical-mile limit enforced by the Israeli navy since October 2006, but well within the internationally-recognized territorial waters of Gaza. She was one of three international observers, along with Vittorio Arrigoni of Italy and Andrew Muncie of the United Kingdom. They were on three fishing boats, accompanying 15 Palestinian fishermen. All were kidnapped and taken to Ashdod, after which the Palestinian fishermen were interrogated and released. Negotiations continue for the return of the confiscated fishing boats that are the sole means of livelihood for most of the 15 fishermen.

“I had no passport and no money,” explained Darlene. “They kidnapped me in Palestinian waters. Then they charged me with entering Israel illegally!” she continued.

She was detained at Maasiyahu Prison, near Ben Gurion International Airport in Lod. Primarily a prison for men, the facility also contains a special section exclusively for “immigration violators” where she was held. After her telephone interview from prison by Amy Goodman, broadcasted on the radio program Democracy Now!, Darlene said that guards seized her mobile phone.

The U.S. embassy in Tel Aviv refused to issue her a replacement passport, but instead gave her an “emergency” passport that was valid only until first entry into the United States.

Facing immediate deportation, Darlene insisted on being sent to London where she has people to receive and support her. Israeli officials refused, insisting on deporting her only to New York. So she landed in New York City with no money, no bags, no spare clothes, and with only an expired passport. Fortunately, after a call for help through the Free Gaza network, supporters came forward to assist her. But instead of coming home to San Jose, Darlene saw her tasks in Gaza as unfinished and rushed as soon as possible back to Cyprus to resume work with the Free Gaza Movement in sending more boats and humanitarian aid to Gaza. But with the long-planned Israeli invasion of Gaza imminent and Israel massing its forces along the border, the Hamas-led government in Gaza asked the remaining foreigners to leave with the last sailing of the SS Dignity from Gaza Port.

With many harrowing stories to tell, it was finally time for Donna and Darlene to come home. But upon landing in San Jose, their first act after a grueling three days of flights was to join an on-going street protest against the blockade and Israeli war crimes in Gaza.

As Israel launched its full-scale aerial assault on Gaza on December 27, 2008, killing some 300 Palestinians in the first two days, most of the world reacted with horror and outrage over the rapidly deteriorating humanitarian situation of Gaza’s 1.5 million residents. These events sparked worldwide protests that snowballed into some of the largest ever demonstrations exclusively on the Israel-Palestine conflict. In San Jose, the largest demonstrations on January 4, 2009 and January 11 at Stevens Creek and Winchester Boulevards each swelled with crowds of up to 1200 people, packing to overflowing all four corners of the busy road intersection. These were the largest protests ever assembled in San Jose (and in San Francisco and many other cities as well) exclusively on the issue of the Israel-Palestine conflict and unconditional U.S. support for Israel.

The last Israeli troops pulled out of Gaza, predictably on the day before Barack Obama’s inauguration as President of the United States. Relying on a compliant Bush administration, Israel ignored ceasefire offers from Hamas and pleas from the United Nations, pressing on with its military assault on the tiny Gaza Strip, killing over 1300 Palestinians and wounding over 5000. Nearly a quarter of the casualties are believed to be children.

But in spite of the Israeli withdrawal, protests go on against Israeli human rights violations and the massacres of civilians. Only the content has changed from protesting the loss of life to mourning for the dead in Gaza.

For Donna and Darlene Wallach, who initiated a small Palestine vigil in Plaza de César Chávez in downtown San José years ago, the street protests have grown by more than a hundred fold. The struggle goes on precisely because there is hope – hope that the occupation can be broken, hope that Israeli apartheid can be tossed into the dustbin of history, hope that sowing justice will someday reap peace for all.