Yesturday SHACtivists in Birmingham held protests against 2 branches of Barclays Bank in the city centre, these protests were done in co--ordination with Italian activists launching their campaign against Barclays across Italy. Barclays Plc are currently investing in Huntingdon Death Sciences, a lab which murders 500 animals every single day of the week are experiencing regular protests in which every time they lose more and more business. 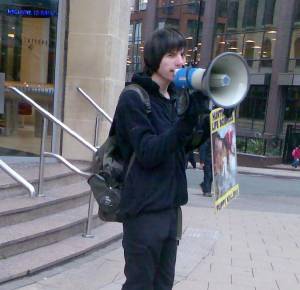 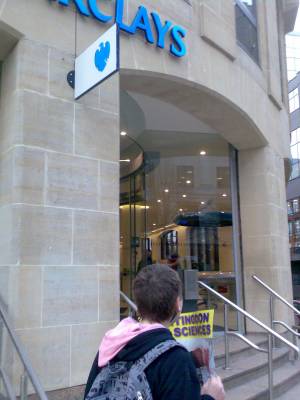 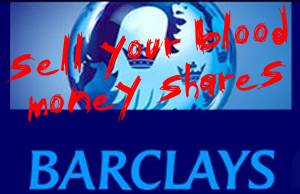 We arrived at the first branch, to which we were greeted by sarcastic smiles and laughs from the staff inside. However their smiles suddenly dropped when their newly aware customers learnt of the filth that Barclays has invested in, every single customer in there left their branch and it was left completely empty for a while! Of course we responded with nice big shiny smiles...

The fun went on as their customers went in to close their accounts and made complaints to them for their unethical investments. We're sure that gave them plenty of things to grin about. Obviously they were enthralled by our presence, because soon to arrive were the police, who fortunately didn't have much to say - and so they shouldn't as we were, as always, conducting a legal and peaceful protest. The police then left us to carry on with our protest .

Barclays had customers completely abandoning the bank at regular intervals throughout the protest, because of just who and what this bank has invested in. Plenty of people went in to complain and close their accounts, we had lots of support from the public who took leaflets and some who asked about getting involved with the SHAC campaign.

Similar public support happened with our next protest at the other Barclays branch, and today Barclays in Birmingham have been very named and shamed.