The industries and individuals responsible for the exploitation of animals in México City and surrounding areas ought to watch their backs and their business. The Frente de Liberación ole México (FLAM) shows no signs of slowing its deliverance streak. 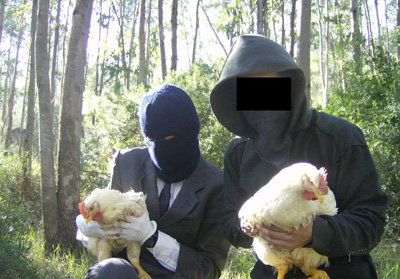 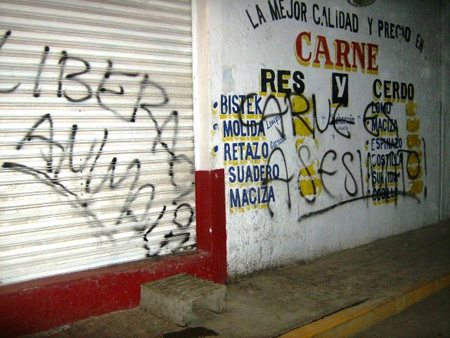 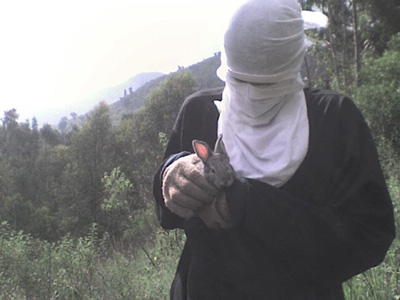 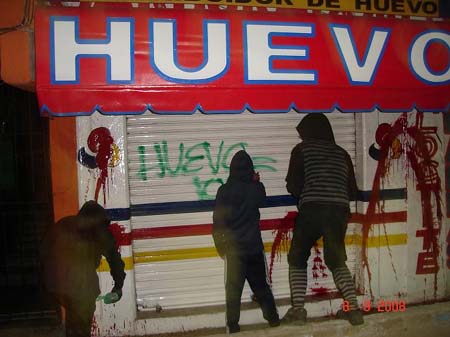 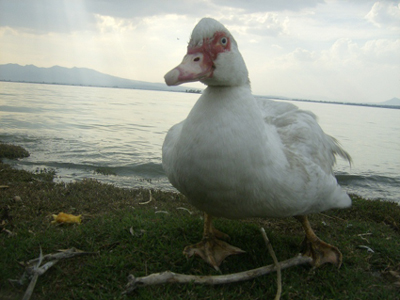 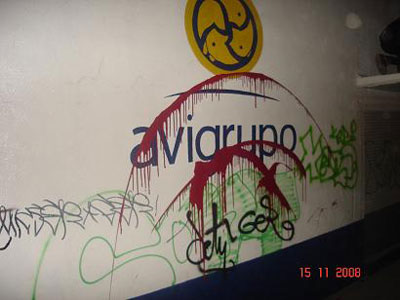 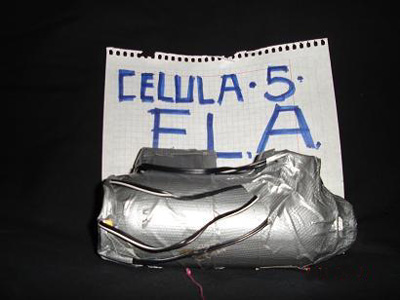 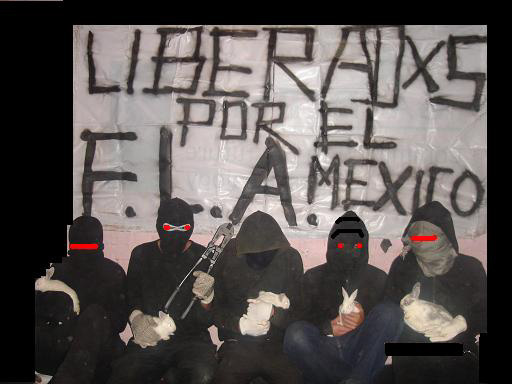 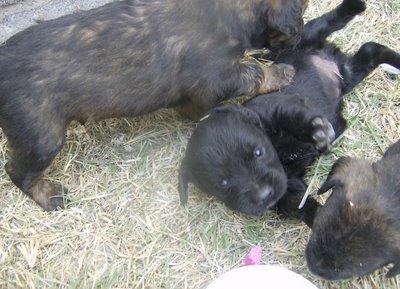 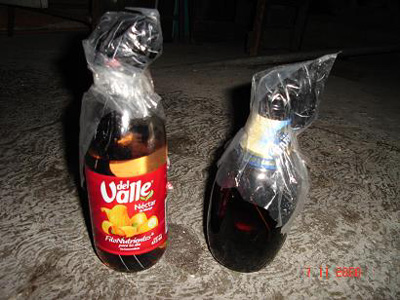 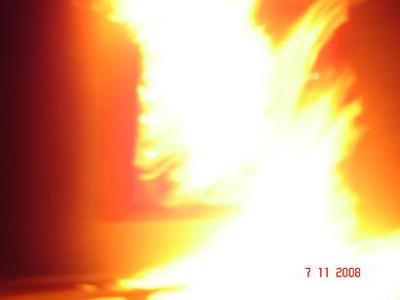 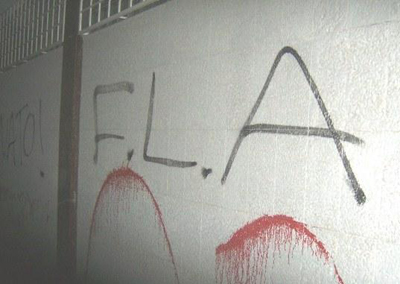 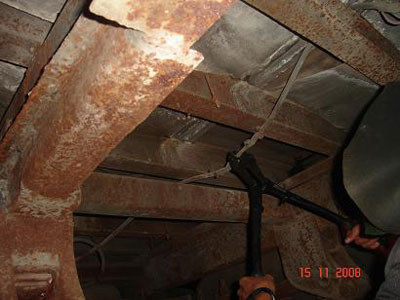 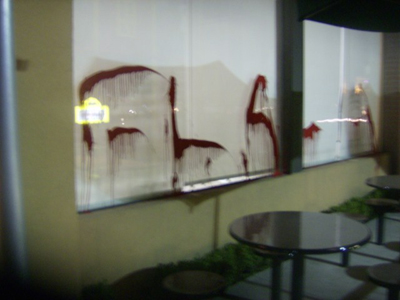 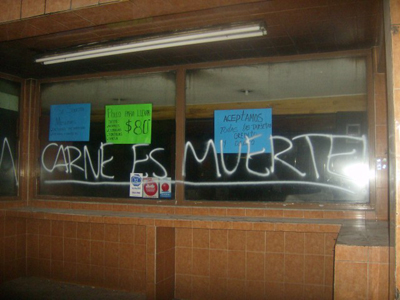 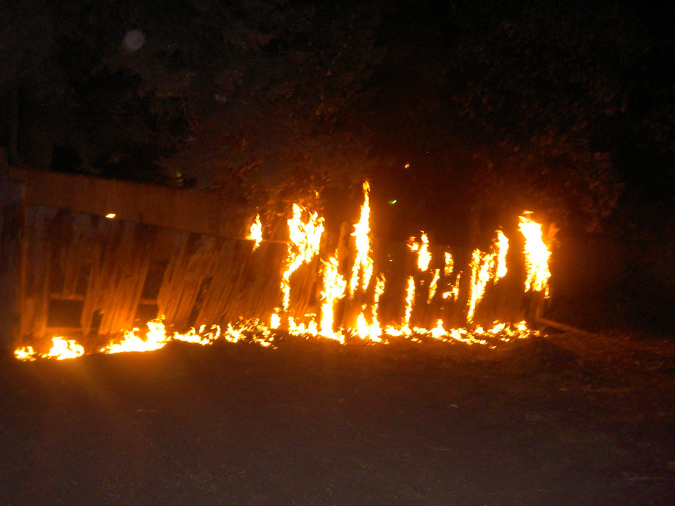 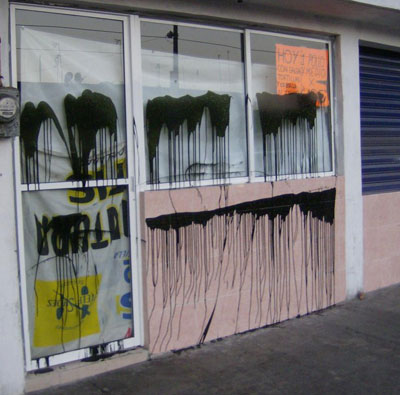 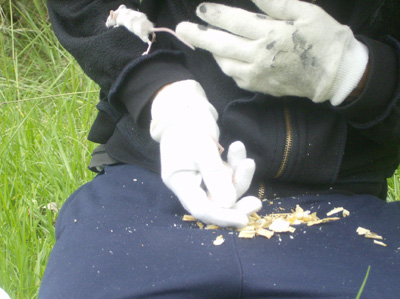 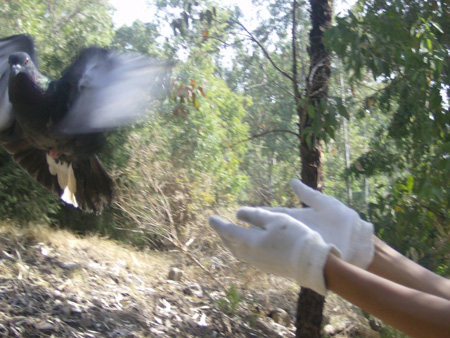 The industries and individuals responsible for the exploitation of animals in México City and surrounding areas ought to watch their backs and their business. The Frente de Liberación ole México (FLAM) shows no signs of slowing its deliverance streak.

Over the last two months, and certainly throughout this past year, FLAM has placed much trust in the handbook on disruption of animal cruelty as they hit the shops, restaurants, labs and homes of those directly connected to the cruelty of animals.

“Animal Liberation is not just two words in zines, web sites, T-shirts, tattoos or patches. Animal liberation is not just words spoken at animal rights meetings, shouted at peaceful demonstrations or rumors spoken about different people. Animal liberation is deeds, fury turned into action, a radical response against the anthropocentric system of domination, the love for freedom. It’s what few dare to carry out. It is a challenge to authority, to society, to the system and to its institutions. It is a fire that spreads and that is unstoppable. It is insurrection.”

The main tactic for this group of animal rights activists in recent months has been spilling blood red paint at various KFCs and Burger Kings, pet stores and fur shops, meat and dairy businesses, university labs, and homes of bird breeders. Dozens of attacks have been committed in this manner. Paint is not used sparingly at these stops, where the walls, floors, windows and shelves are often left covered by the color of our tortured friends. FLAM has used some incendiary devices this year, but has also chosen tactics that leave their messages in writing for the business owners—and, more importantly, the public— to see plain as day. “Meat is death” and “eggs are torture” are a couple slogans left this September during a night attack on a number of businesses. “It is very important to show the facts of these businesses to the public, to ask about what is hidden in packaged products and their ‘beautiful and artistic’ plates filled with death and suffering,” stated FLAM. In early September a visit to the “great white gates” surrounding pharmaceutical company Novartis, a customer of Huntington Life Sciences (HLS), became stained with red paint and a clear message: “Novartis cut ties with HLS.”

The autonomous chapters of FLAM have shown much solidarity with their non-human friends by throwing stones at the windows and illuminated signs of their profiteers, which occurred at least five times during the month of September. An estimated 35 doors of meat markets have been glued shut, accompanied by slogans and the symbols of FLAM on their targets’ property—erasing any doubt as to who or what has come to disrupt business as usual. In a communiqué from early September, the group wrote, “We know that these are small things, but for us they are important and big.” This is also an approach the group has taken when it comes to their targets, it does not matter if a business is large or small; “walls that hid torture and subjugation were damaged.”

On August 17, while visiting the Universidad Nacional Autómoma de México (city university) in México City—where, reportedly 15,000 rats and 18,000 mice are housed and sold to other industries for experimentation— FLAM launched paint bombs at the building and windows. The group reported that this action was the first time a FLAM activist was arrested. A minor was released without charges or fines, and bravely sat through interrogations asking for the names of fellow activists. The group involved in this action wrote that they were able to learn from the experience and see how their mistakes, as well as their successes, can help them in future actions, and acknowledge the possibility of more investigations into their work might be being conducted.

Late August saw the liberation of twenty-three rabbits from a pet store in Mexico City when, in broad daylight, the defenseless creatures were rescued in front of the shop owners and nearby merchants. On September 2, the owner of a restaurant, who chooses to raise “cockfighting” roosters, fell prey to an action that left him exposed to his community. Though the “sport” is a tradition of Mexico, this disgusting and dishonorable human fascination needs to be dismantled. The activists left the message, “stop killing animals,” on his property for neighbors to discover and proceeded to his place of business to spill paint. In mid- September the Comando Verde Negro FLAM daringly entered the home of a bird breeder and made sizable holes for the captive birds to fly from their cages, never to return again to a life behind bars.

FLAM enjoys hitting many targets on a given night, as well as making hits night after night. The blood-pumping excitement of their liberating actions is also freeing them from the crushing pressures of society to adhere to a life that accepts cruelty to animals as a legitimate business. As one communiqué states, “A fire to modernity, stones to consumerism, we break the systematic yoke.”