Around 100,000 Tamils marched through Westminster today to persuade our government to take action over the Sri Lankan genocide of the Tamil population, to shame our media into breaking their silence over what is happening there and to call for the establishment of a Tamil homeland, Tamil Eelam. Pictures (C) 2009, Peter Marshall, all rights reserved. 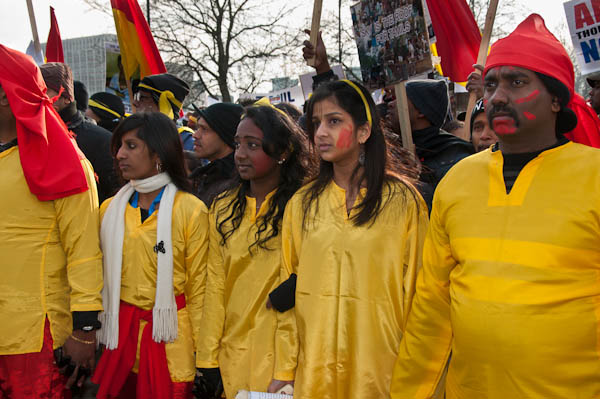 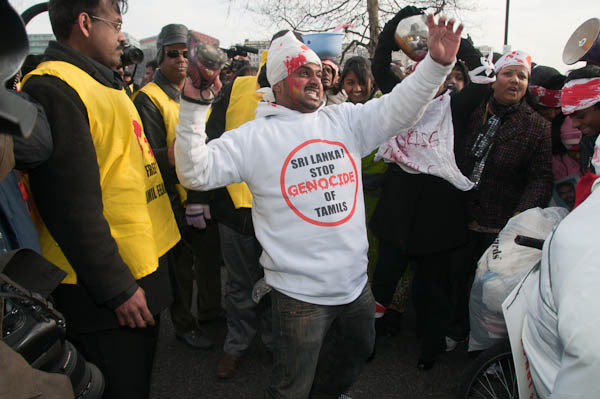 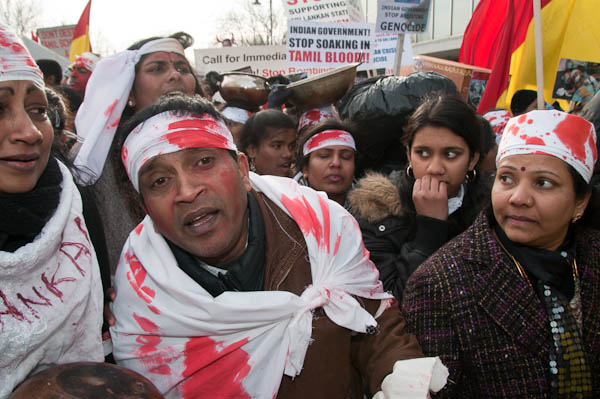 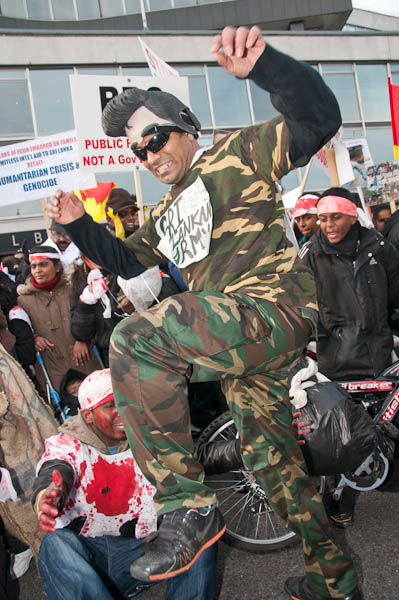 Elvis of the Sri Lankan Army goes into attack 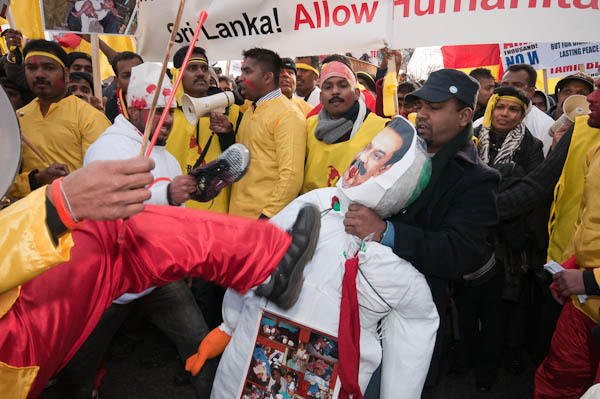 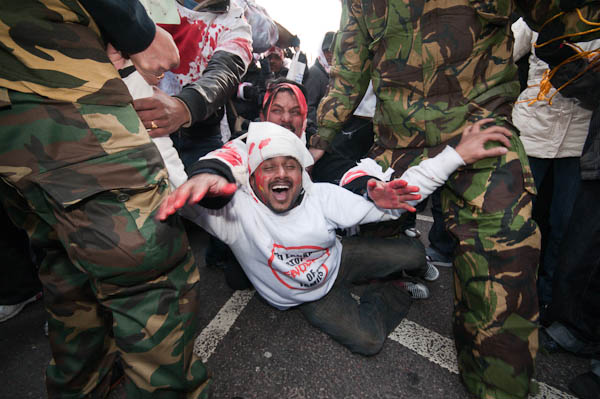 Attacked by the Sri Lankan Army 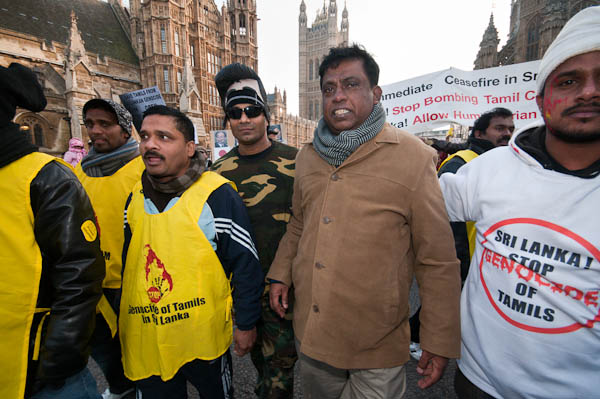 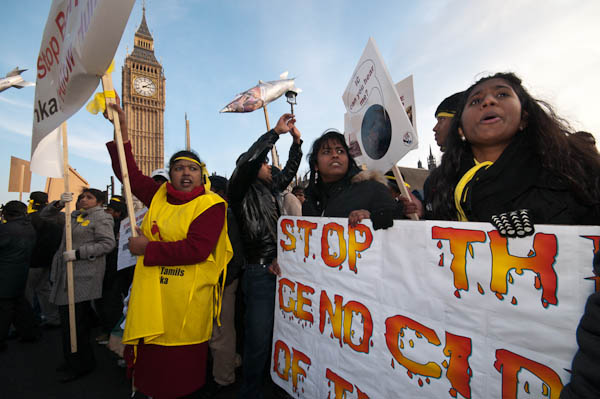 Second time this month, I felt ashamed of the BBC. Ashamed because I grew up believing that our national broadcasting organisation was the best in the world (and in some ways it still is.)

Of course its first glaring failure this month was the kowtowing of its management to Israel when they decided not to broadcast the Gaza appeal. A second blot on the organisation came today. This evening, fresh home from a massive demonstration in London by Tamils I turned on Radio 4 for the six o'clock News and found to my amazement that it hadn't happened. There was not the slightest mention of it. Later I checked the BBC News web page - again nothing.

Probably the largest popular demonstration in the country since the massive anti Iraq war demo in 2003 is news. Between a third and a half of the UK's Tamil population on the streets in Westminster is news. And certainly the genocide that is taking place in Sri Lanka, with government troops shelling areas packed with civilian refugees is news. But apparently not for the BBC.

The Sri Lankan Army appears to feel that at last it has the Tamil Tigers on the run and is determined to try and finish them off, whatever the cost in civilian deaths and injuries, bombing and shelling areas where they think the Tigers are hiding and where they know hundreds of thousands of civilians have taken refuge. Those civilians that manage to escape these areas are put into camps where the world's press and humanitarian organisations are refused access - and about which we can only presume the worst.

But I was only reporting from Westminster, and the massive demonstration there, united in its strength of feeling and dedicated and intense in its demand for an independent Tamil homeland, Tamil Eelam, in the Tamil area of Sri Lanka. Although the chanting was loud and feelings were rightly running high against the atrocities, with street theatre acting out the attacks of the Sri Lankan army on the people and children and adults dressed in bandages and blood (or rather red dye) stained clothing, there seemed little danger of public disorder.

Many of the police were in fireproof clothing, and stood clutching fire extinguishers with the pins removed. They were not fearing a burning of flags or some incendiary attack on Parliament, but were ready in case some individual attempted to burn themselves to death as a protest. Fortunately they did not need to rush into action.

It was a very slow march up past Parliament, with people stopping at intervals to sit down on the road, to the considerable annoyance of the police, who at times made some pretty ineffectual attempts to speed the march up. But there were so many demonstrators they were powerless; even though the demonstrators generally law-abiding they were determined to have their day and take their time.

Among those marching was at least one Sri Lankan MP, M K Shivaji Lingam of the Tamil National Alliance (TNA), who has stated that "it will be impossible to crush or destroy the LTTE (Liberation Tigers of Tamil Eelam) militarily" and that "Hindu culture (in Sri Lanka) is at stak,e" threatened by the attacks by government forces that have taken over and damaged many Hindu shrines. In December he visited India and obtained the support of several Hindu groups for the Tamil cause.

The majority of Tamils in Sri Lanka are Hindu, while nearly all the Sinhalese are Buddhist, though there are also many Christians in both areas (including over 15% of Tamils.) There are also Tamil-speaking Muslims in Sri Lanka, but they regard themselves as a separate group.

Although there are over 50 million Tamils in India and only 3.1 million in Sri Lanka, most of the the UK's 200,000 or so (estimates range from 150-300,000) come from Sri Lanka as a result of the discrimination and persecution their community has suffered there at least since the 1960s. Most of them live in London, particularly in East Ham, Walthamstow, Brent, Merton and Croydon. Among the Tamils in the UK are around 2,500 NHS doctors.

When I arrived around 12.40, the streets from Vauxhall station to the assembly point by the Tate Gallery were already crowded with people and I had a job to push my way through to the front of the march - although fortunately everyone was very polite and helpful (including the stewards and police - this was a march it was a delight to photograph.) It was a march that never really started, but from a little before 2pm slowly edged its way forward in small steps, and by a little after 3pm the front of the march was in Parliament Square.

I left around an hour later, with marchers still streaming past the Houses of Parliament, with the end of the march still coming up Millbank, and Horseferry Road just reopening to traffic. Bringing up the rear was the decorated bus or 'tiara' built in Karachi for Dalawar Chaudhry who owns a restaurant in Southall, which as well as its normal extensive decoration had posters calling for an end to the ethnic cleansing and highlighting the killing of politicians and human rights activists in Sri Lanka.

More pictures from the event on My London Diary shortly: