Bayer Day of Action in Sweden

For the international day of action activists targeted Bayer Cropsciences headoffice in Stockholm, Sweden. About fiftheen activists gathered in front of the main gate to the compound where Bayer is situated. Obviously, the company already knew of our plans and two security guys stood guard in front of the gate. They had to redirect some of the traffic to another lane to get them through the crowd of angry protesters and as workers drove away several gave us the thumbs up. 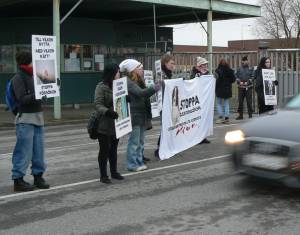 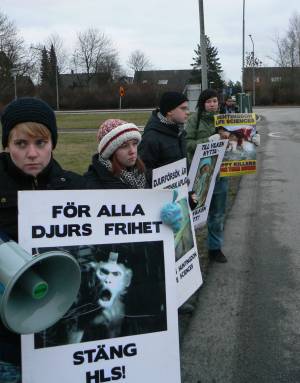 It can't be comfortable doing business in a compound where everyone knows what you're up to, but you don't know if they hate you or not. Moreover the whole neighbourhood have been informed a couple of times about Bayers involvement with HLS. This day brought more of the same as activists put up posters and stickers and put leaflets in mailboxes around Staffanstorp. Focus is on Bayer now and hopefully people in the neighbourhood will spread the word and discourage others from working at the company. This is usually what happens when people find out you're paying for animal torture and death.

As slogans were chanted through megaphones and all the people leaving were informed about Bayers senseless slaughter cops started to catch up. Some of them had gathered at Bayers office inside the compound, since this is the usual place for protests. Others had parked at a nearby gas station to keep an eye on things. However, they just said everything with the demo was in order (of course it was!) and continued to put even more shame on Bayer by just being there. As the last workers left the area activists called it a day and promised to return to continue to name and shame one of HLS biggest customers.

This demo was, in every way held in solidarity with the UK SHAC7. As injustice finds new targets to drag through trouble we will fight even harder to stop it. Until every animal, non-human and human can live free we will continue our struggle.

Respect and compassion have no borders - unite against all animal abuse!