On 1 February, several newspaper reported that Binyam Mohamed, who has been on hunger strike for over a month, is "close to death". Today, a High Court judgment revealed that the US bullied the UK into not disclosing information it has about Binyam's torture in Morocco or it would not share intelligence information any more (please see Reprieve press release below). Take action now...time is running out...it's now or never for Binyam! 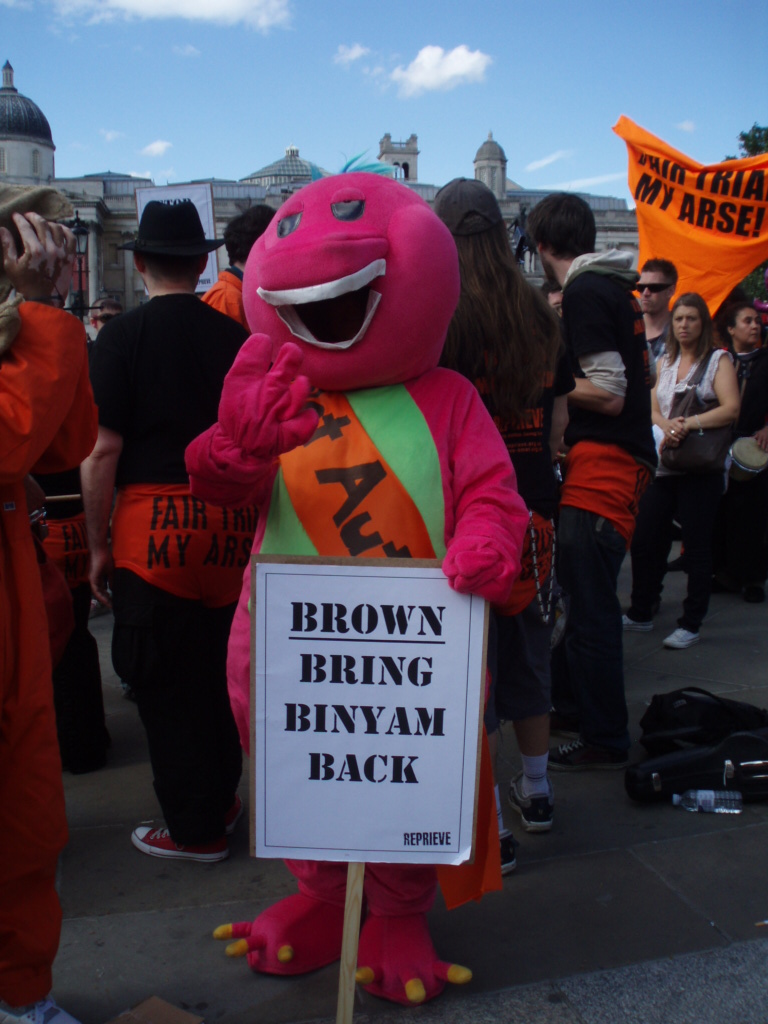 Press reports on Sunday 1 February stated that Binyam Mohamed, on hunger strike and being force fed, is "close to death". Yvonne Bradley, a US military lawyer who visited Binyam last month told the Observer that "he is just skin and bones. The real worry is that he comes out in a coffin".

Also in the Daily Mail:

In a further twist in the tale today, after an expedited judicial review to get the British government to disclose information about Binyam's detention and torture, including his genitals being cut with a scalpel over and over again, in Morocco and Afghanistan, the High Court today, Wednesday 4 February, revealed at the end of the case that they cannot force the FCO to disclose this information as the Americans have threatened their best friends, the UK, that they will not share any more intelligence information if the information gets out and names their security agents. In a previous hearing, the High Court had described Binyam's case. vis-à-vis UK and US intelligence, as "deeply disturbing".

There is NO denial that Binyam was tortured and NO denial that both countries were knowingly complicit, the only questions are who and to what extent?

TAKE ACTION: write to President Obama and ask him to take action to allow this information to be disclosed:

http://www.whitehouse.gov/contact/ . The High Court judges ended their judgment by asking Obama to make that information available.

More on this story in the press today:

NB: this isn't the first time the UK has admitted to being complicit in US rendition and torture. Almost exactly a year ago, the UK admitted to allowing two rendition flights refuel on the UK-administered island of Diego Garcia in the Indian Ocean. The government denied this for years and this is probably just a small part of our involvement. MP Andrew Tyrie filed an application to consider where the UK stands in view of such action under our international obligations under the UN Convention against Torture in the summer of 2008. Today's Guardian newspaper also runs a story about M15 involvement in Pakistan.

Also note that President Obama did not outlaw the use of torture and extraordinary rendition in his executive order to close down Guantánamo Bay.

In an extraordinary ruling, two British judges sitting on the case of Binyam Mohamed have revealed how the US government has "threatened" the British government with reprisals should the British reveal evidence that American agents were involved in his rendition and torture. The judges end the decision with a plea to President Obama to reconsider President Bush's remarkable policy of retribution against anyone who might reveal American crimes:

No fewer than eight times, the judges refer to the American "threat" made against their closest ally, the British. Mohamed v. Secretary of State, at ¶¶62, 70, 73, 76, 76, 76, 77, 107). The British intelligence services have 42 documents that apparently demonstrate abuse of Binyam Mohamed a British resident.

"The US is under a legal duty to investigate the crime of torture, not to suppress evidence that it happened," said Reprieve Director Clive Stafford Smith. "And the UK has a similar duty. For the Foreign Secretary to give in to these illegal demands by the Bush Administration is capitulation to blackmail, pure and simple. It is hardly Britain's finest hour. As the judge's say, it is up to President Obama to put his money where his mouth is. He must repudiate his predecessor's reprehensible policy."

Mr. Mohamed is a victim of "extraordinary rendition" and torture. He was initially held illegally in Pakistan for four months, which is where a British intelligence agent interrogated him under circumstances later found to be illegal by the British court. He was rendered to Morocco by the CIA on July 21, 2002, where he was tortured for 18 months, with the British government supplying information and questions used by the Moroccan torturers. On January 21, 2004, he was rendered a second time, to the secret "Dark Prison" in Afghanistan, where his torture continued. Since September 2004, he has been held in Guantánamo Bay. He has never been tried for any crime.

"Binyam was tortured horribly in Pakistan, Morocco and Afghanistan and it is clear from this case that the British security services were complicit in that torture," said Clare Algar, the Executive Director of Reprieve.

"Today's judgment notes the British Government has a duty to investigate and possibly prosecute the perpetrators. Unfortunately, it seems that this might be the only way of exposing the shadowy facts about kidnap and torture which the US continues to hide beneath the false front of national security."

Reprieve lawyer Cori Crider added: "Secretive and lawless to the last, one of the final acts of the Bush administration was to try to bully its closest ally into sweeping Binyam Mohamed's torture under the rug. This is repugnant to the principles of open justice on which both our societies were founded."

"On Day One of his administration, President Obama declared his government would "operate under principles of openness, transparency and of engaging citizens with their government". If this does not apply in the case of Mr. Mohamed's torture, where does it apply?"