On the evening of Sunday 1st February university management issued an ultimatum giving protesters two minutes notice to leave. After this, university security entered B62 and used physical force, arm locks, pressure points and verbal aggression to end the peaceful sit-in, which had been called in solidarity with Gaza. For a video of the eviction, please see: 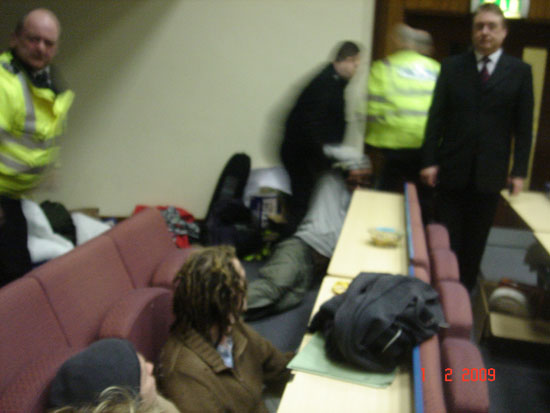 Last Wednesday, 28th January, we began a peaceful sit-in at the Law and Social Sciences building. We were moved to act in response to Israel’s attacks against the people of Gaza and the deteriorating humanitarian crisis there, calling for urgent action from our institution. This was one of at least 17 other campus occupations at universities across the country and part of a national movement of solidarity with the people of Gaza.

https://my.nottingham.ac.uk/). Here we wish to outline ours.

Israels’ latest attacks have cost the lives of over 1,300 Palestinians, injuring and maimed many thousands. Tens of thousands of civilians have been left homeless and displaced. Head of the UN Palestinian refugee agency in Gaza, John Ging, is now joining international calls for an investigation into the recent attacks. There is now prima facia evidence that these attacks constituted war crimes as defined under international humanitarian law. In Gaza we are also witnessing the continued systematic denial of basic human rights. We are asking the university to help us work towards assisting in the realisation of the universal right to education for Gaza.

Our university maintains strong ties with arms manufacturers, for example through research funding received from weapons companies such as BAE Systems and the Smiths Group, who supply military equipment to Israel. Collaboration with companies complicit in war crimes and the systematic denial of fundamental rights is unacceptable, as is their access to our careers events.

We feel that our university’s perceived economic and political support for Israel’s aggression is irreconcilable with our deep concern for the humanitarian catastrophe in Gaza, in the absence of tangible and meaningful change. The University of Nottingham has a well-documented history of ignoring student concerns, and we believe that our action –the peaceful occupation of a lecture theatre- was proportionate to the situation.

We stated explicitly in our communications to senior management, on the evening the occupation began, that any disruption of our peer’s education was expressly against our wishes. We made our position very clear, guaranteeing that we would maintain a diminished, strictly silent and unobtrusive presence during lectures. Throughout the occupation we took steps to ensure that B62 was a fully functional, clean and pleasant learning environment, and used the space to host a number of talks, film screenings, entertainments and events.

The reaction of senior management at Nottingham to our peaceful occupation stands in stark contrast to the approach adopted by almost every other university where similar protests took place. At Oxford for example, a student occupation of the historic Clarendon Building ended peacefully on the same day it began. Oxford senior management engaged in dialogue from the outset, reaching a mutually satisfactory agreement with the student protesters that meaningfully addressed the concerns they raised about Gaza. Similar courses of action were undertaken by senior management at other universities.

We received absolutely no communication from university management concerning our demands. The first response we heard was a statement made to the press approximately 24 hours after the protest began. Other than that, the only communication from management was a demand to end to our sit-in that did nothing to address or even acknowledge our concerns for Gaza. Our intention was to open a constructive two-way dialogue with the university concerning our demands. The only offer of dialogue was made in the same breath that threatened disciplinary action and we were refused this in writing. The offer was not considered meaningful and so we chose to continue our protest, thinking that the university would reconsider and adopt a more constructive position. This was not the case, however.

At approximately 6pm on Sunday 1st February university management issued an ultimatum giving us two minutes notice to leave. After this, university security entered B62 and used physical force, arm locks, pressure points and verbal aggression to end our protest.

In the light of past issues pertaining to suppression of the right to protest and curtailment of academic freedom on this campus, we were prepared for a less accommodating response from university management here at Nottingham in comparison to other universities. We did not, however, anticipate such clear unwillingness to engage in any reasonable discussion or the use of violence to end our peaceful occupation. This was neither patient nor tolerant, and clearly not the only option that was available to senior management.

There was a complete lack of transparency in the way the university conducted itself. The only records we have of their communications are from videos and our transcripts. During the forced eviction, property was confiscated, significantly a number of cameras. Our property was held for a number of hours and the curtains to B62 were shut preventing us from seeing what was happening. Students were only permitted to retrieve their belongings on production of their ID cards, numbers were recorded by security. These are not transparent, proportionate or reasonable actions.

Our protest has revealed is that the academic space at our university has become a place for the one-way flow of hegemonic paradigm within a very narrow framework of ‘acceptability’. An academic environment should teach students how to critically engage with important and controversial issues. Disappointingly, the university have proved that they are prepared to resort to violence in order to enforce the depoliticised ‘harmony’ (read conformity) of the campus and silence dissent.

Some of us are from Gaza, some of us are Palestinian refugees and some of us have simply been moved to act out of a strong sense of moral necessity. We believe that it is morally right for us in our privileged positions to take action to alleviate the humanitarian crisis in Gaza. Their plight is our plight.

We welcome the university’s acknowledgment of the need for dialogue concerning the issues we have raised. We hope to engage with the University management in a constructive way to address what have finally been acknowledged as legitimate concerns. If the university truly ‘remains committed’ to building dialogue, we suggest that our initial concerns may be a useful place to begin.

We believe that the most appropriate way forward is for us as an academic community to actively defend and promote the right to education for people in Gaza. Through providing scholarships and academic aid, Nottingham University could reach out to those who have been denied this basic right, and go some way towards compensating for our institutions’ silent complicity in the current catastrophe.

We invite everyone, staff and students, who are interested to contact us to help to work towards this goal. We will continue to assert our right to freedom of expression and assembly. These are the basic building blocks of a democratic society and the most powerful tools with which we may seek to right injustice and better the world around us.

Rally for Gaza: Books not Bombs

Meet at the Top of Portland Hill, University Park, everyone welcome!
Friday 2.30 pm.