Barclays has more demos in Birmingham

SHAC Demonstrations continue against Barclays branches in Birmingham as today we carried on with our regular protests against them. 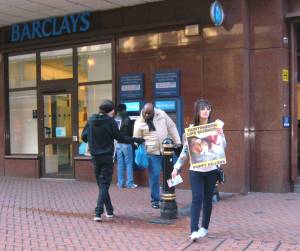 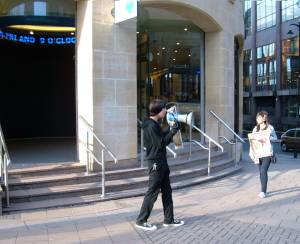 We revieved plenty of public support as usual, a couple of people pledged to join the SHAC campaign as well as joining other people going into Barclays to complain about the filthy company Huntingdon Life Sciences which they have invested in, careless to the lives off the 500 animals being tortured and murdered there every day.

What kind of people instead of being against the vicious animal cruelty at HLS, beagles being punched in the face, live primates being dissected and kittens having their eyes sewn shut, choose to invest in this?

Barclays bank should be ashamed of themselves, and so it shows they are as today they even tried to deny having shares in HLS... we told their customers who had been lied to by their own bank, to take a look at the stock exchanges and see for themselves.

We'll keep up the demos against you Barclays until you drop HLS, and this stands for anyone else who has ties with them.

There is no excuse for animal cruelty!