The Sea Shepherd vessel Steve Irwin has rammed the Yushin Maru No 3 whaling harpoon ship while under attack by Long Range acoustic weapons. Captain Paul Watson said "I was dazed by the sonic blasts being used on us at close range. I have to admit it was difficult to concentrate with that devise being focused on us." 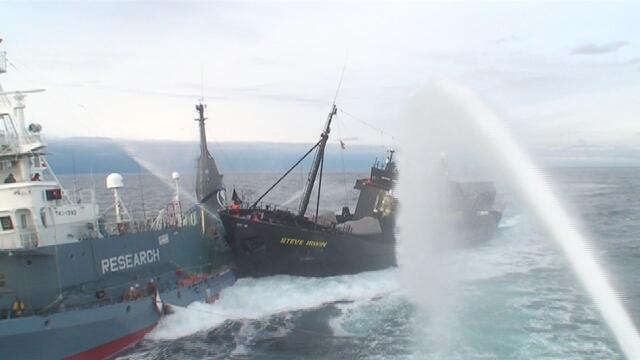 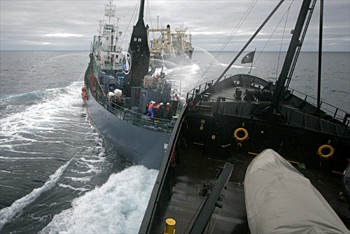 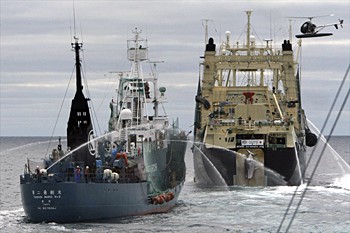 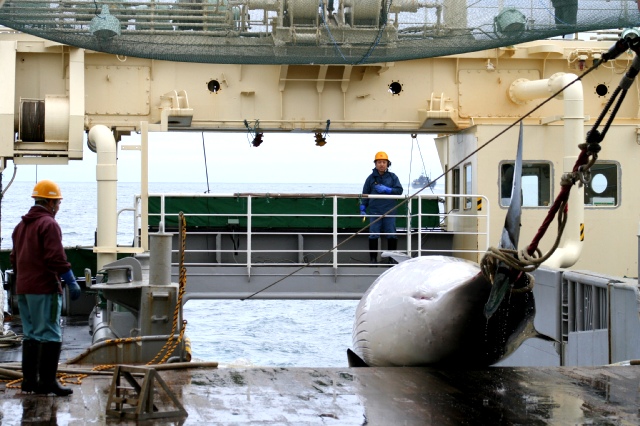 Whale about to be butchered for whale steaks (Photo: ICR)

No injuries occurred during the collision. It was the second ship collision during an eventful day in the Southern Ocean Whale Sanctuary in the Ross Sea near Antarctica. The Japanese Whaling fleet has decided to stop running from Sea Shepherd and recommenced whale slaughtering which has provoked confrontations between the whalers and Sea Shepherd activists.

With the Japanese Whaling Fleet using three harpoon boats, Sea Shepherd does not have the resources to prevent harpooning of whales. Once harpooned, the whales need to be transferred to the rear slipway of the factory ship, the Nisshin Maru. Sea Shepherd have endeavoured to block the transferring of dead whales by placing their boat, the Steve Irwin, right behind the Nisshin Maru. Both collisions have ocurred in this situation with the Japanese attempting to force Sea Shepherd from blocking access to the Nisshin Maru slipway, while pounding the activists with hire pressure water jets, Longe Range acoustic Device which can daze or confuse people within its range, and metal objects.

According to Captain Paul Watson from Sea Shepherd "We told them to not continue their illegal whaling operations and that we would be blocking the stern slipway of the factory ship. They decided to test our resolve and apparently expected us to retreat when they charged in ahead of us to make the transfer."

The collision during the transfer of a the dead whale to the Nisshin Maru factory ship occurred between the Steve Irwin and the Yushin Maru No.3 harpoon vessel with the forward starboard side of the Steve Irwin and the port stern side of the harpoon vessel coming together. According to Watson Sea Shepherd were under a barrage from high pressure hoses, metal objects and the acoustic weapon which made the Steve Irwin difficult to control. "I was dazed by the sonic blasts being used on us at close range." said Captain Watson. "I have to admit it was difficult to concentrate with that devise being focused on us."

Emily Hunter, daughter of Greenpeace founder and journalist Bob Hunter, said "I've never felt anything quite like it. It penetrates the body and you can feel your muscles vibrating. It made me dizzy and left me somewhat dazed."

Director-General of the Institute of Cetacean Research, Mr Minoru Morimoto said "The Steve Irwin 'captain' is completely ignoring the safety of crews aboard both the Dutch vessel and the Japanese research vessels and engaging in extremely dangerous behavior. Due to Sea Shepherd's increasingly violent actions the risk of a more grave and serious accident
happening is increasing by the hour,” he added. He called for the Government of the Netherlands and Australia being held accountable for "serious criminal acts at sea."

"I wish we did not have to be down here in this dangerous situation," said Captain Watson. "I've said repeatedly that if Australia or New Zealand would agree to take Japan to the international court on this than we would back off. Because international law is not being enforced, we have no choice but to do what we can with the resources available to us to defend these endangered whales in this established international whale sanctuary."

In the previous whaling season the Australian Government sent a Customs vessel to document the Japanese whaling operation. Although the Labor Government of Kevin Rudd and Environment Minister Peter Garrett made strong statements to stop Japanese commercial whaling in the Southern Ocean Whale Sanctuary when elected in 2007, there has only been diplomatic overtures made and effectively ignored by the Japanese Government. No action has been taken to initiate international legal action against Japan, even though the actions of the whaling fleet has contravened several international agreements.

The Sea Shepherd ship Steve Irwin collided with the Yushin Maru #2 on February 6th, 2009 0800 Hours (Sydney Time), 1300 Hours (PST) (February 5th), while the Steve Irwin's attempted to prevent the transfer of a dead whale up the slipway of the Nisshin Maru.

“Just after the second whale was being transferred to the Nisshin Maru, the Dutch vessel came forward and rammed the Yushin Maru No.2 at the stern. While no-one was injured, the
circumstances could have been much worse, even fatal,” said Mr Minoru Morimoto, the Director General of the Institute of Cetacean Research in a press release.

"The whalers have decided to test our resolve," said 1st Officer Peter Hammarstedt on board the Sea Shepherd ship Steve Irwin. "They have escalated this battle to see just how determined we are to protect these whales. We're shepherds and we will do what we can to protect our flock from these murderous poachers."

While the Steve Irwin maintains position behind the Nisshin Maru, they are blasted with high pressure water hoses and the Long Range Acoustic Device (LRAD) sonic weapons.

Both Sea Shepherd and the whalers have attempted to foul each others propellors in a deadly game of manourvering and circling in the icy seas. Sea Shepherd have fired warning flares towards harpoon boats attempting to cross its bow.

Sea Shepherd used its small helicopter, called the Kookaburra, to videotape the harpooning and shooting of a Minke whale during the morning, 10 miles away from the Steve Irwin. According to Sea Shepherd the whale took 25 minutes to die after being struck with a harpoon and receiving 7 shots from a high powered rifle. The icy sea was full of blood.

"We can't cover all the harpoon vessels with the resources we have," said Sea Shepherd U.K. director Steve Roest who was injured as a result of a sonic blast from a Long Range Acoustical Device (LRAD). "These hunter killer ships are out for blood, our blood and the blood of the whales."

The whalers have pointed their Long Range Acoustic Device weapon at the Sea Shepherd helicopter, endangering the lives of the pilot and cameraman on board.

The Steve Irwin positioned itself behind the slipway of the Nisshin Maru in an attempt to block the transfer of the whale's body to the factory ship.

"Seeing the long prolonged agonizing murder of that defenceless whale has made me angry," said Captain Paul Watson. "Very angry. We are going to make a stand here today to shut this obscenity down. It will be dangerous but we did not come down here to witness the slaughter of whales, we came down to stop the killing. We have a very big disadvantage," continued Watson. "Japan will defend the violence of their mad dog killers. Our governments don't have the guts and will condemn us for defending ourselves and the whales. Sometimes you just have to say, what the hell and make a stand and that is what we intend to do here today. We intend to make a stand."

Japan is claiming their commercial whaling operation is for research, and is undertaken under the scientific research provisions of the International Whaling Commission. The Japanese Fisheries have set their own catch quota for their 'research' this year at 900 Mincke whales and 50 of the Fin whales, which are listed as an endangered species. Although the Institute for Cetacean Research says they collect "100 kinds of biological data and samples from each whale carcass", there is a distinct lack of peer reviewed scientific publication of the research. Other whale researchers dispute that lethal research is necessary for collection of most data.

"If the anti-whaling nations had the same resolve and determination to stop whaling that Japan has for slaughtering them, we could end their obscenity," said Captain Paul Watson. "These whales are dying because of the passive complacency of Australia, New Zealand, the USA and the other so called anti-whaling members of the International Whaling Commission."