Over 50 demonstrators and rather more police blockaded the main UK depot of Israeli company Carmel Agrexco today, Sat 7 Feb, to demand a boycott of Israeli goods and in particular the flowers and fruit which they bring from Palestine, from Israeli settlements and from Israel.
Pictures copyright (C) 2009 Peter Marshall 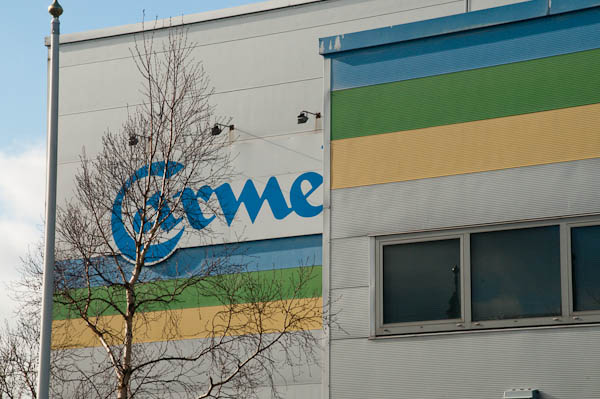 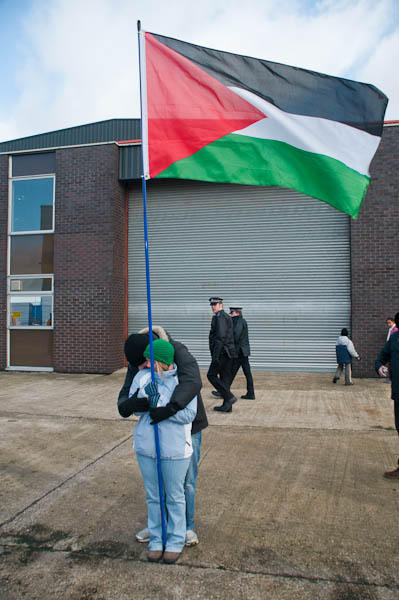 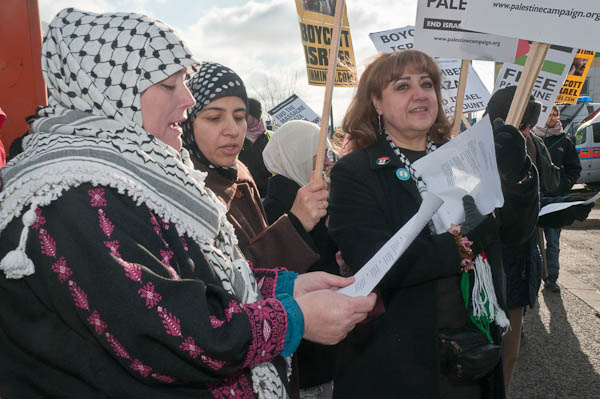 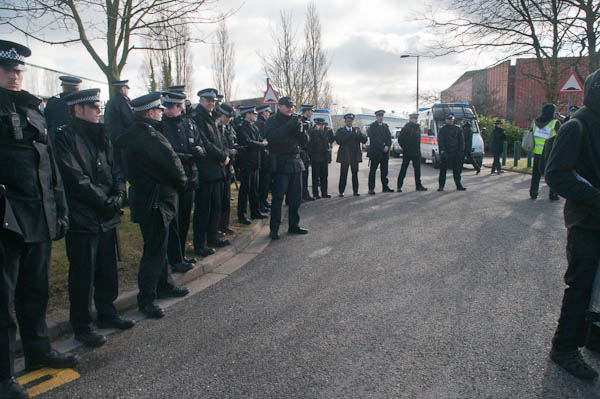 The line of police that stopped the march 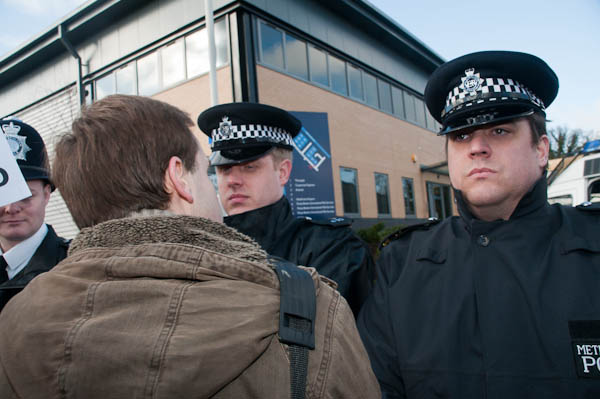 "Why can't we go through?" No reply 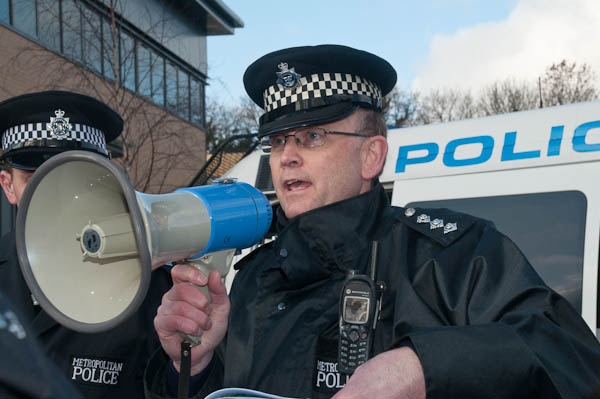 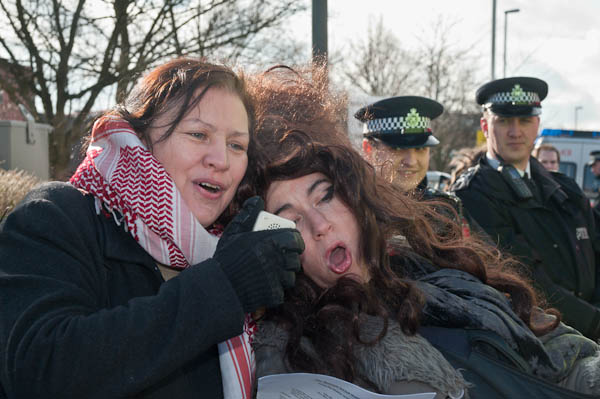 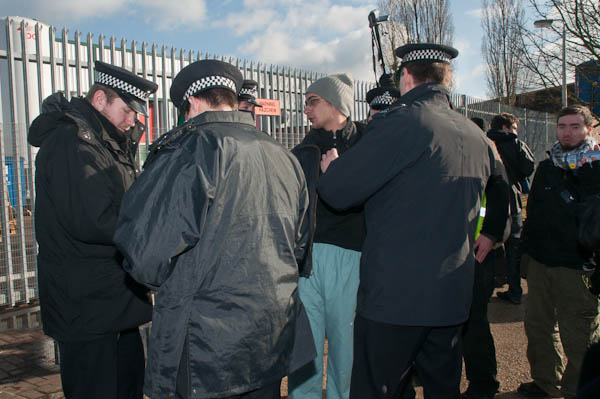 Police stop and search one protester 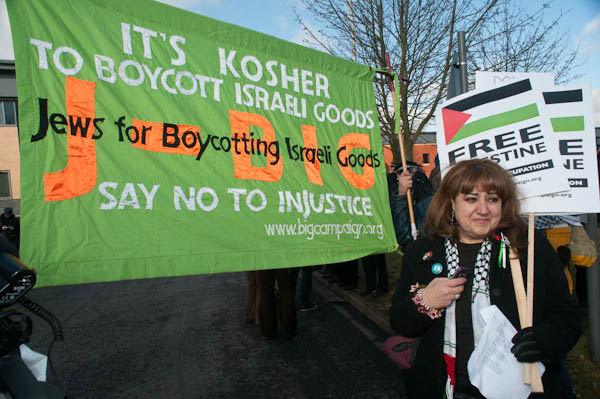 It's kosher to Boycott Israeli Goods 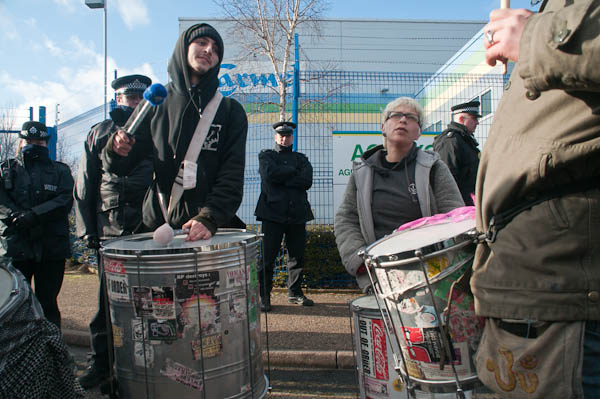 There was no sign of the Israeli flag which used to fly proudly outside the Carmel Agrexco warehouse in Hayes, and the Union Jack on the adjoining flagpole was tattered and skewered on its pole. When I arrived the gates were closed and guarded by around 20 police, with perhaps another 50 or more in reserve in vans parked around the industrial estate, including a couple of old vans that looked like they had been rescued from the knackers yard and cheaply fitted with a notice saying Metropolitan Police in the front windscreen.

Roughly the same number of demonstrators eventually arrived, looking considerably more cheerful than the police who appeared to be feeling the cold. Once the samba band got there the protesters went off with them for a walk around the block, hoping to visit another company involved in the export of Israeli and Palestinian flowers on the estate. Police formed a solid line across the road and refused to let the marchers past, pushing back those who tried but refusing to say why there were not allowed to continue. Eventually an Inspector introduced himself and read a statement (he afterwards confirmed this was under the Public Order Act 1986) confining the demonstration to the block containing Carmel Agrexco, and after a few arguments the marchers moved on.

At this point one man was stopped and searched, but no arrests were made. The FIT photographer was hard at work throughout the event, but generally the police were well-behaved and made an effort to engage the protesters and photographers in polite converstation throughout the roughly three hours I was there.

At several places the march stopped to sing songs, with 'Amy Whitehouse' whose wig was surely too tidy to fool anyone and another singer with a strong voice, both of whom had the advantage of knowing the tunes. The Boycott Israel Song (tune Bye Bye Love) reminded us not to buy Israeli goods including dates, Jaffa fruit, Israeli wine - and anything with a bar code starting 729. A new Boycott Agrexco Song (none of us knew "Jesus wants me for a Sunbeam" - we didn't sing it at my Sunday School) was more specific, reminding us of the house demolitions and checkpoints that force Gaza farmers to sell their produce dirt cheap to Israeli companies who illegally export them as Israeli produce, and of the stealing of water from Palestine to irrigate Israeli fruit. It ended on a seasonal note:
"Don't buy your flowers from Agrexco
To give your valentine
Boycott the fruits of apartheid,
And help free Palestine"

Agrexco is Israel's largest exporter of agricultural produce and much of it goes to EU countries including the UK. Its main UK depot is in Hayes because this is close to Heathrow - where much of the produce is flown in to this country.

Movement of food by air is a considerable an unnecessary drain on the planet's resources and contributes to global warming. So Carmel Agrexco was naturally a target for demonstrators during the Heathrow Climate cap in August 2007. As in other protests no prosecutions resulted despite there being considerable damage reported.

Protesters claim that Carmel Agrexco is in violation of international law in exporting produce - mainly carnations, strawberries and cherry tomatoes - from Gaza, as well as from Israeli settlements inside the Green Line and in the West Bank.

More pictures on My London Diary,