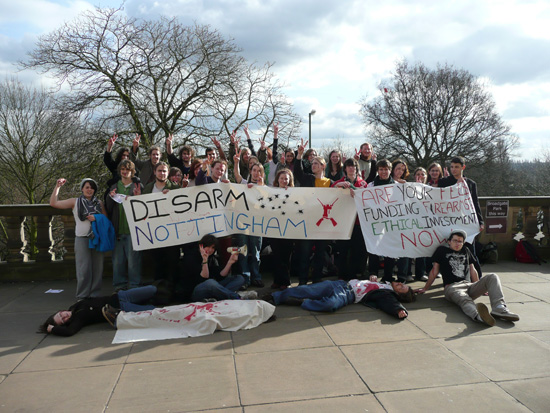 The arms trade is inherently unethical. Arms companies, such as BAE Systems, Rolls Royce and Qinetiq, profit from war and destruction, arm repressive regimes and juntas and are more often than not heavily involved in corruption and deceit. Arms companies rake in massive amounts of capital while being complicit in some of the most horrific war crimes, atrocities and human rights violations on the planet; they are literally making a killing. Come and die with us to protest about our university's links with and support for the arms trade!

How is the University of Nottingham Linked to the arms trade?

INVESTMENT
The University's investments and pension schemes are managed by finance companies such as Newton, who have in turn invested this capital into arms companies like the Smiths Group, who arm Israel. We are asking the University to take steps to ensure full divestment from all arms companies.

CAREERS
Many arms companies are regularly given a platform at the University's careers events. Promoting such companies, and actively helping them to pray on unsuspecting students, with flashy power points and free buffets is highly irresponsible. We are asking the university to ban all arms companies from campus events.

RESEARCH
According to a 2008 report by Campaign Against the Arms Trade and Fellowship for Reconcilliation, Nottingham University ranks 6th in the UK for arms research with at least £29 million invested by companies including BAE Systems, Rolls Royce and Qinetiq. We do not feel this is something to be proud of. Research should be carried out with the aim of improving human life and knowledge, research into arms is harmful to both of these and is detrimental to the university's credentials as a research leader.

This protest is being called by 'Disarm Nottingham' a broad-based coalition of societies and individuals working to end university links with the arms trade. contact: