Students from the University of Aberdeen are fighting for the freedom of Palestinians through a 'Boycott Israeli Goods' Campaign. 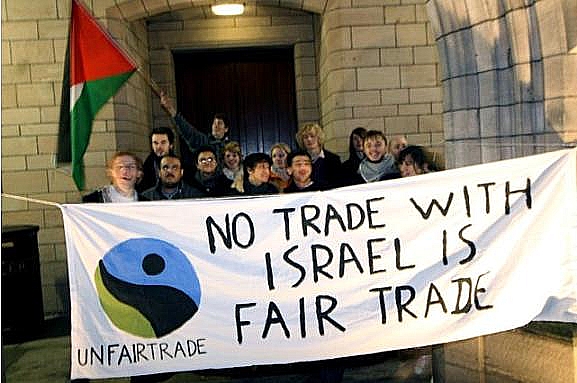 STUDENTS across the United Kingdom have taken action in response to the brutal 23-day long attack on Gaza.

Ranging from campaigns to raise funds to be sent to the impoverished people of Gaza under the Israeli blockade, in the form of much needed medicine, baby incubators, fire engines and ambulances; to university occupations, demanding disengagement from arms companies supplying the Israeli Army.

A group of students at the University of Aberdeen, organized around the Stop the War Coalition, are fighting for the freedom of Palestinians through a ‘Boycott Israeli Goods’ campaign. They gathered on Friday 13 February at the Elphinstone Hall, where members of The Food Co-operative were meeting, to pressure the food retailer to ban Israeli products from its stores.

The Co-operative, who claims to operate on ‘ethical foundations’ and principles of ‘social responsibilities’, has a long tradition of ethical and environmental policies and is the UK’s leading supermarket supporter of Fairtrade. On this basis, according to the boycott campaigners, “No trade with Israel is Fair Trade”.

A spokesperson for the group involved in calling for the boycott said: “Israel’s occupation of the West Bank and siege of the Gaza strip has caused enormous hardship for Palestinians. At the same time, much of the Israel’s export goods originate from the occupied territories where the land and water of the Palestinians is stolen at gunpoint by Israeli military, with return only in the form of bombs and bullets”.

“Therefore, exerting economic pressure through a boycott on Israel is not only ethical but might also be decisive in the struggle for freedom for Palestinians, just as it was in the case of the South African apartheid regime that finally ended in the 1994”, they added.

Whether the demonstration was successful is not yet clear; however, the Co-op's representative at the meeting told us that a motion (not described in any more detail) had gone forward from the Scottish Co-op executive to the UK executive on this subject and, of course, the decision of the members would be final.