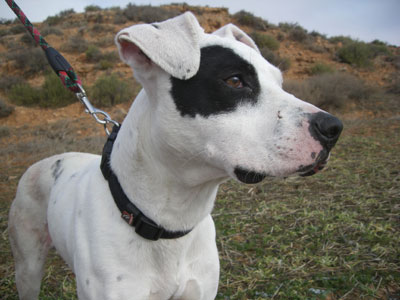 Dog rescued from abuse in Spain 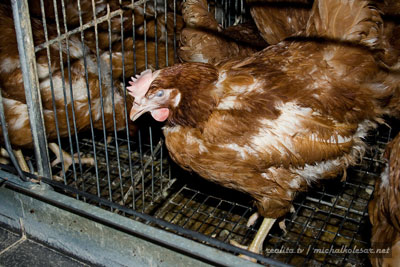 16 hens rescued in the Czech Republic

"In some areas and neighborhoods in Granada people still enjoy watching dogs fight until death. The money passes from hand to hand while the blood flows onto the ground. Some of the dogs, dying, are put into plastic bags to suffocate, and thrown in a dumpster. This was to be the fate of Mel, a young pitbull who we rescued from appalling conditions; it was clear the end that he was destined for.

In honor of our compañero Mel Broughton, we decided to give the same name to this freed dog, as a symbol of the work and effort that Mel, now imprisoned for his work on the SPEAK campaign, dedicated to all animals.

This was for you, you can count on our support.

"On a recent evening, a visit was paid to the Yorkshire Farmhouse free range and organic egg business. As people know this sector operates in a similar way to it's sister factory farming industry. Male chicks are slaughtered at birth. 'Flock depletion' takes place after the hens have lived only around 10% of their so called natural lifetimes due to diminishing returns from each laying hen. They are then sent to the same slaughterhouses as factory farmed birds and their lives taken.

Of course these places aren't quite so bad as the massive sheds where hens are locked up 24 hours a day. But the pictures that entice the moralistic egg eating crusaders on the front of the packs, are indeed just one side of this gruesome industry, happily supported by vegetarians. Who by supporting these companies, are essentially eating the flesh straight off the bones of these hens.

When we arrived at the targetted barn, we immediately rescued a hen that had been shut out for the night and left to fend for itself among the foxes. After forcing entry we proceeded through the entranceway and into the main body of the building. Here we could see hens as far as our torches could travel tightly packed into the space, and sitting on iron bars just a metre above the shit pit. We could identify that many of the birds had few neck feathers, and also few wing feathers, as well as having been debeaked.

We proceeded to take a hen for each of the animal rights prisoners incarcerated in jail, and then we took some more. After retrieving them, we looked to the thousands of eggs stacked in the entranceway, and began smashing them. The hens that we took have been found new homes.

It's time to stop believing in the ethical myths of the organic and free range animal industries.

"In the night of 5 on 6 February 2009, we from ALF Poland gave two customers from HLS some red color on their building.

Inside HLS animals are being tortured and killed in useless experiments.

Astellas in Meppel (NL) and Schering-Plough in Houten (NL) have been targeted. This time it was only some red paint. Next time we won't be so friendly if you don't cut your ties with HLS immediately.

This action is dedicated to the SHAC prisoners in the UK and USA and to all other prisoners.

"Open rescue of 16 hens in support of SHAC prisoners, fuck the jails.
In January 2009 there were 16 hens freed from battery cages and put in new, safe homes."

"On January 26, to mark the international day of action against Bayer, for the SHAC campaign, we came to the building of this pharmaceutical company and we stained the facade with plenty of red paint, we also graffitied phrases on one of its walls demonstrating our rejection of HLS and we threw leaflets explaining what vivisection is all about and why we repudiate it, this text also mentioned the SHAC campaign and their actions.

No more vivisection or any other form of exploitation!!!
Freedom for the seven SHAC prisoners and for all the prisoners of the world!!!

21st Jan - Media reported that the Andover (Hampshire) town center was sealed off for two hours on January 21 following a report of a suspicious package at a Barclays Bank (HLS shareholder). The phone call came just a few hours after the seven SHAC activists were imrpisoned for "conspiracy to blackmail", but was not claimed. Barclays in Hampshire and the south have been heavily sabotaged because of their support for Huntingdon Life Sciences (HLS).

"On January 20, UC Berkeley's [Personal details removed as per:

http://www.indymedia.org.uk/en/static/privacy.html#Personal_Information] was followed to work.

As he left his car parked in a garage on campus, he was whistling and had no idea he had been followed. We preceded to vandalize his shiny new Audi, paid for with blood money. We would have reduced the Audi to ashes; if not for the fact that tailing him prevented us from grabbing the instruments that would have set his shit aflame. But there's always tomorrow.

We acted against [Personal details removed as per:

http://www.indymedia.org.uk/en/static/privacy.html#Personal_Information] because he is a veterinarian in UC Berkeley's vivisection labs. Hey [Personal details removed as per:

http://www.indymedia.org.uk/en/static/privacy.html#Personal_Information], time to become a real vet and help sick and wounded animals recover; not ensure the smooth functioning of the torture chambers by assisting vivisectors in callous and fraudulent experiments on fourty-thousand beautiful, innocent beings per year.

And to [Personal details removed as per:

http://www.indymedia.org.uk/en/static/privacy.html#Personal_Information] and the rest of the Office of Laboratory Animal Care sadists; don't think that you or your property will be spared.

This action was carried out with full dedication and solidarity to the SHAC-UK prisoners.