Home Demolitions in the Negev 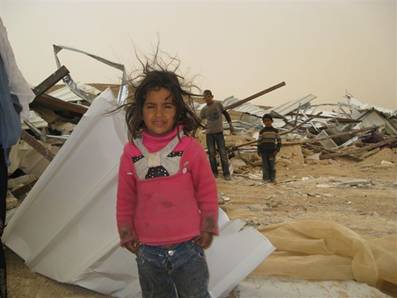 Bir Hadaj lays 40 kms south of Beer Sheva, in the Negev desert, a location very sparsely populated. The Government of Israel recognized the village about six years ago. The villagers believed that their troubles were about to end. This has not happened. The village leadership is requesting sufficient land to allow the people to continue with their livelihood – animal husbandry. According to an expert at the Ministry of Agriculture there is need for 12 dunams (3 acres) to allow profitable sheep husbandry.
The government is offering 4 dumans (1 acre), with no option for land reserve when the population grows. At a growth rate of 5% a year within one generation there will be no land left for the sheep.

However, over the last ten years, in order to strangle any hope for the people of Bir Hadaj, the government has turned a blind eye to the "single family ranches" that Rifman, the director of the Ramat Negev Regional Council has established illegally. At least five such ranches surround Bir Hadaj now – each (Jewish) ranch owner received hundreds or thousands of dunams for his own use. The land they received is more than double the land that all the 4,500 residents of Bir Hadaj are requesting for their entire village. This is Zionism: "protecting" the land from the Arabs…

The leaders of the village of Bir Hadaj know that if they cannot receive the land allocation they are requesting, the villagers are doomed a future of poverty and misery. However, the government of Israel is not interested in a true negotiation process, and in order to convince the leadership in the
village, they use the violent strategy of home demolitions.