'Our mission is clear, our demands simple and straight forward, our motivation indestructible. We will not sit idly by or look the other way whilst animals pine away and suffer inside HLS!' 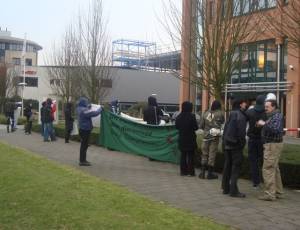 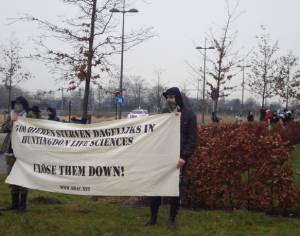 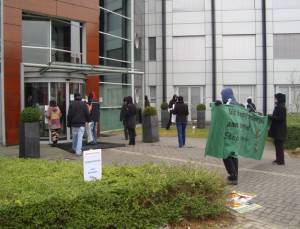 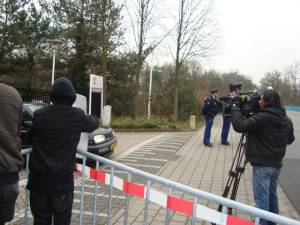 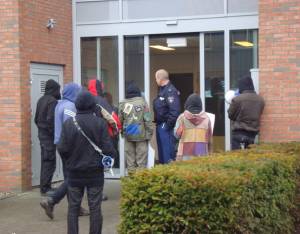 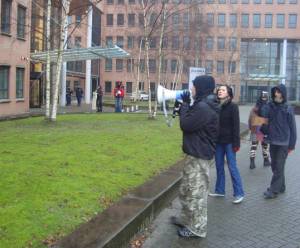 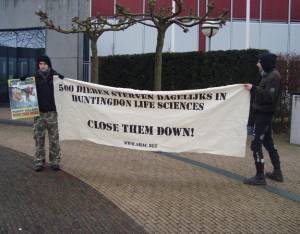 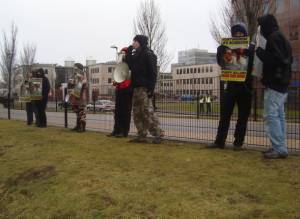 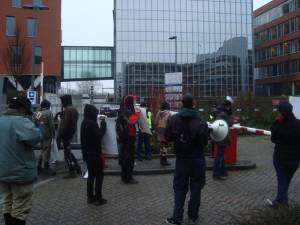 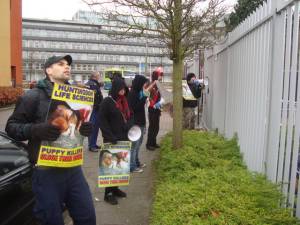 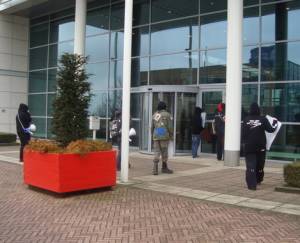 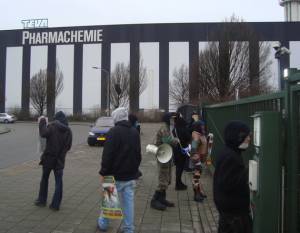 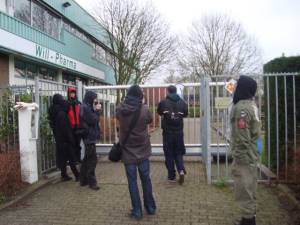 Demo 1: Bristol-Myers Squibb
We planned a greet the workers demo at BMS for this morning, unfortunately BMS workers didn't want to be greeted by us, what a shame! A few of the workers showed their faces and straight away got the whole group of activist showing their disgust at their links with HLS, so they crawled back under their desks.. We explained to BMS we will never go away and they will never get rid of us until they stop working with HLS. The attempts of HLS and UK government to shut us up has been a failure, with more demos now than years before. We promised the animals we will never let them down, so we will never do!

Demo 2: Actelion
Actelion just located 10 minutes away from BMS looks to us as a real conspiracy of animal abusers in Woerden. I think it is quite clear to us Actelion what is happening. Did you get special instructions by the new
team to tackle animal rights activism by the government? By being told not to look out of windows and keep the curtains shut we will still get the message out by megaphone! No company dealing with HLS will get away with killing innocent beagle pups, baby mice and beautiful monkeys!

Demo 3: Schering Plough
This demo was a great demo with all the surrounded companies of Schering Plough coming out looking what was happening. Everyone knows you're real cowards Schering Plough! It looks like you are really panicking with loads of security standing behind the entrance door! Do you think we would come running through the doors while having a special police team on our back? We all know you have been thinking and stressing days before we planned the demo about SHAC coming to do a demo at your office! As the national news said today some of the pharmaceutical companies look like prisons to protect them from animal rights activists. That's just what we want when pharmaceutical companies kill animals. Let it be a reminder of all the suffering of all the animals in HLS. Day in day out they suffer fear and pain, we will never accept this!

Demo 4: Glaxo Smith Kline
This the main location of GSK in the Netherlands and it is a huge building located next to the highway so everyone can see their sign. People must know this company is responsible for so many deaths! It is unacceptable and we have to bring an end to this. The national Dutch news came filming and interviewing our protest and we all know when this will be launched on national TV they would be no understanding for what GSK is doing worldwide. Another conspiracy to kill lovely beautiful animals! GSK we have been protesting at your site for many years now and you know what it is like to be a SHAC target, we will never go away until you drop HLS!

Demo 5: Glaxo Smith Kline
After being at the main GSK building we went on to their other building which is quite near. We will go wherever HLS targets are. Also these GSK workers got confronted with their cruel business. Stop it GSK!

Demo 6: Phenomenex
We have demoed this key supplier a few times already. They have been a HLS supplier for a long time now. When Phenomenex drop HLS they will have difficulties operating. Their office in the Netherlands is just a small office located between lots of other offices. No one was surprised we were here again, everyone knows us. And everyone knows who the animal abusers are. You can laugh about it Phenomenex but you will never get away with it!

Demo 7: Teva
Next stop was Teva Pharma, a customers of HLS. They are located in a single storey building. We surrounded their whole office with all our activists. We walked freely around their building naming and shaming every single worker inside Teva which we could spot looking between the curtains. There's just one option to get rid of us Teva, sever your links with HLS!

Demo 8: Bayer
It was a surprise to us that the workers of Bayer were still there this time! Didn't your boss let you go home earlier this time? Normally when arriving at Bayer their building is totally empty. Even the copper on his motorcycle who was supposed to watch us drove away when we arrived and sat on his motorcycle watching us 200 meters away. We will never let the animals in HLS down and confront every single one of you! We know you all feel the pressure of SHAC, sever your links right now or we will be back!

Demo 9: Novartis Pharma
To end the first day of action we went one of the biggest customers of HLS, Novartis Pharma. When we arrived most of the workers already left. During the demo just one Novartis worker came out and was named and shamed straight away. Novartis we know you don't give a damn about animals. We will just make it more and more difficult for you as long as you work with HLS. Make the right decision! We will never rest until the animals in HLS can rest in peace, shame on you Novartis!

Day 1 one of our tour through the Netherlands has been a successful day with 9 protests starting in the early morning when workers came to their offices lasting until workers went home again. It is our mission to close down Huntingdon Life Science which means we will confront every company that deals with HLS from the early morning till late in the evening. Animals in HLS suffer day and night, we will never back down until HLS is closed down and al animal testing is no more!

Demo 1: Pfizer
You are the lowest of the low Pfizer! When animal abusers go to their work we will be there as well to confront you. Greedy abusers like you who like to see animals die for money are just a bunch of low maniacs. It is easy to hide in a smart suite behind your desk, but we will bring out the truth Pfizer! Sever you links with HLS or we will be back!

Demo 2: Sanofi-Aventis
This was a loud and confronting demo outside the two big buildings of
the greedy pharma scum of Sanofi-Aventis! As we walked on towards the site of Sanofi police had to bring us back down because we were not allowed to come close to the animal abusers. Maybe it was even better because you all smell like dead animals, workers of Sanofi. We will be back very soon!

Demo 3: Astra Zeneca
Last time we came the building was totally empty except a few people. The car park was totally empty, this time all curtains were shut and more then 100 cars were there. You can't go and hide every time Astra Zeneca! You are one of the customers caught out using HLS in the recent ADI expose during 2007-2008. You must feel ashamed of yourself, all of you Astra Zeneca workers. How can you live with yourselves knowing beagle pups are being punched in the face, mice being poisoned to death every day, all day long! It is wrong, it unacceptable, we have got to stop this and we will make you stop Astra Zeneca!

Demo 4: Astellas
This was a loud and angry demo against the animal abusers of Astellas. The whole demo we were chanting and showing our disgust about them. Between the companies buildings it echoed 'if you want to get some rest, cut you ties with HLS!'. We hope you learn from our protest Astellas. It is not just about you severing your links with HLS. It is about thinking of the animals in HLS and all the other animals suffering in labs you are paying for. The answer to this is simple Astellas, if you don't sever your links with HLS, we just go on and bring on the pressure! There's no excuse for animal abuse.

Demo 5 and 6: Abbott Labs and Wyeth
Two HLS customers located just in front of each other, Wyeth and Abbott Labs. In the beginning it was just a big chaos, groups of activists running around buildings of Wyeth and Abbott, shouting at workers of the companys. Anyone who had a look into their street would see activist running around everywhere! Don't ever think we will go away Abbott and Wyeth! No one will stop, whatever the Dutch government promises you. Compassionate people are everywhere and pressure on HLS targets and pharmaceutical companies keeps going up, that is a fact. You are the ones to blame Wyeth and Abbott. We only
want to hear one single thing from you, no more HLS!

Demo 7: Merck, Sharp & Dohme
This site of MSD is a huge place with different buildings everywhere. With megaphones we shouted all together about how disgusting they are. How many animals have you killed today MSD? It is a shame! We don't want you ever again using HLS or we will back at your site!

Demo 8: Teva
This was a great demo with lots of workers coming out through their gate, which was surrounded by us. Every worker coming out got to see the posters of beagle puppies cut open and megaphones telling our disgust about them. It is disgusting Teva! How do you dare to kill animals. And how do you even think of working with HLS. You know what this will mean for you. It is wrong decision to kill animals, it is wrong decision to work with HLS. And it was a mistake, never mess with the animals! SHAC Netherlands will always be there for the animals.

Demo 9: Daiichi Sankyo
This was a short and quick demo. All the workers had already left the building and gone home early. You can not run away from the truth Daiichi Sankyo. But we know you know what it is like to deal with HLS, we have been here many times and will just come again. You can not hide forever.

The first two days of our tour has been successful with 18 demos in 2
days. We will be back with another day of the tour at HLS shareholders
and NYSE Euronext. Dealing with HLS means dealing with US.

We will take on the fight until HLS is bankrupt and the animals heading
to HLS are safe, just bring it on!