Today Cardiff University students demanded their university immediately divest from the arms trade, by occupying the main building on campus. Students are currently locked in the Shandon lecture theatre and are refusing to leave until the university responds to their demands.

Cardiff University invests in companies that supplied Israel with weapons used in the recent attacks on Gaza. The occupation is in opposition to the University’s investment in the arms trade and to the atrocities committed in Gaza, where 1.4 million Palestinians are blockaded in a semi-autonomous apartheid state.

The occupation, the first of its kind in Wales, followed a Books not Bombs protest at midday where students brought along a book to signify their support for education, not war. Israel’s indiscriminate targeting of civilians has seen human rights abuses on a vast scale and many schools and universities there reduced to rubble. The students currently occupying are acting in solidarity with those whose education has been jeopardised by the crisis.

A student who is currently occupying the university said:

"I am ashamed that Cardiff University is helping fund the horrific violence in Gaza the consequence of which is the obliteration of education infrastructure in another, poorer part of the world. I don’t want the money I pay for my education contributing to the destruction of someone else’s. Our thoughts from the occupation are with the people of Gaza, who have lost so much.”

The action at Cardiff is the twenty-eighth UK student occupation to have taken place in the last few weeks. This unprecedented wave of student dissent has seen many universities capitulate to occupier’s demands and review their investments in arms companies.

1. If you would like to visit the occupation, further quotes of information please call 07886543863 to speak to students inside the occupation. Photos available on request.

3. Cardiff University has £209,000 invested in the arms trade including investments in BAE systems and General Electric. Both of these companies supplied Israel with weapons which have continually been used in attacks on and the siege of Gaza.

4. The Occupation demands include:
* Cardiff University to divest all shares from arms manufacturers and aerospace companies.

* Cardiff University to be twinned with a Gazan university, to show support for the Gazan people at this desperate time:
The twinning is to involve:
a) Scholarships for at least 5 Gazan students to study in Cardiff
b) Surplus books, computers and other education materials to be sent to the twinned university.

5. Israel’s attacks on Gaza have led to the deaths of over 1400 Palestinians, including over 400 children, and the injuring of over 5500. It is now believed that humanitarian and war crimes may have taken place including the indiscriminate targeting of civilians (including the bombing academic institutions), the obstruction and targeting of emergency medical staff and the use of white phosphorus as a weapon.
See the Disasters Emergency Committee website; www.dec.org.uk/

6. The UK arms industry exports billions of pounds worth of weapons every year, many of these to regimes with poor human rights records, to areas of conflict or to countries with huge development needs. The arms trade fuels war and undermines development, including education infrastructure.

Email messages of support to below email, make sure to CC in David Grant, Vice-Chancellor of Cardiff Uni via PA:

First Photos of the Occupation 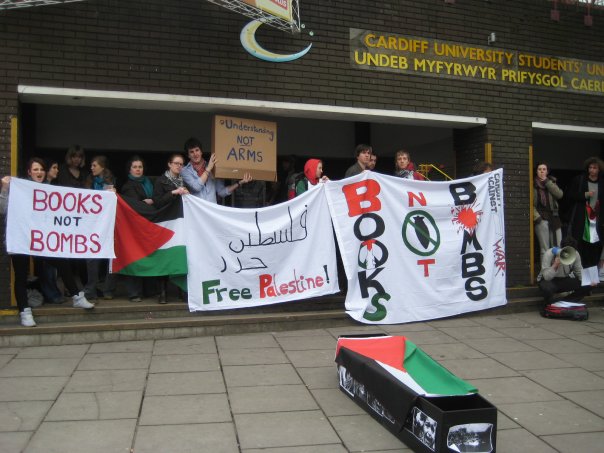 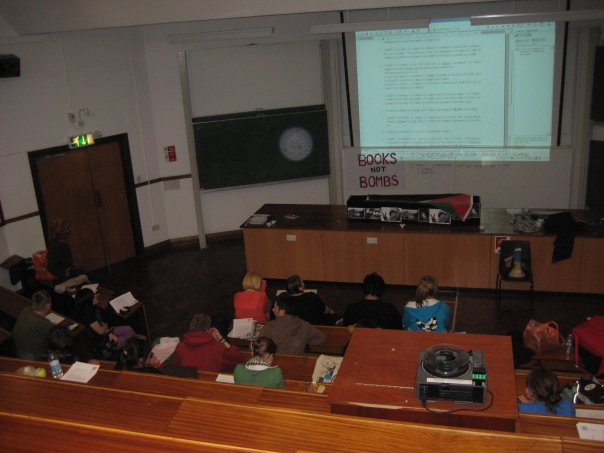 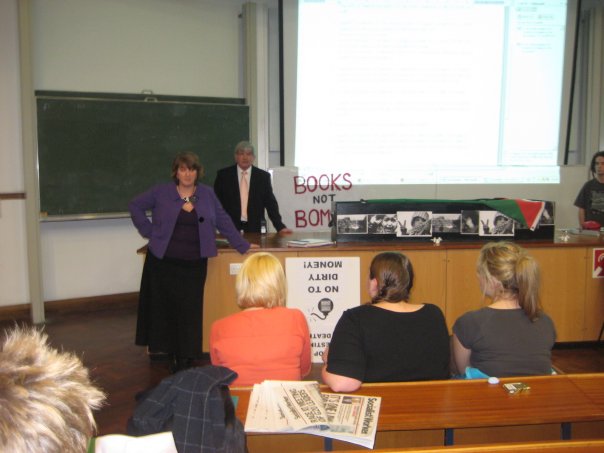 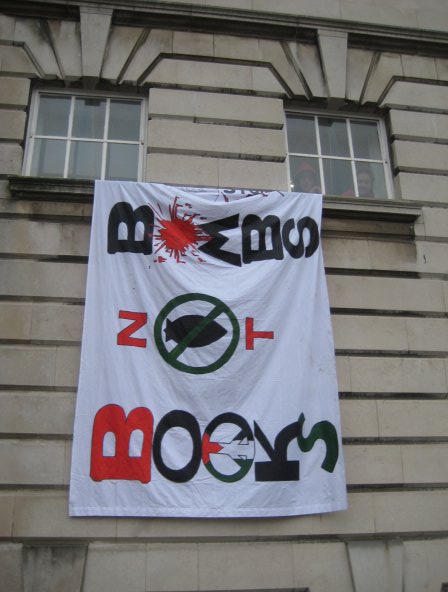