The occupation of the Shandon lecture theatre by 30 students goes into its third day. But why stop at Cardiff university, when Swansea, Bangor and Aberystwyth universities have also got their fingers in the military pie?
On 24 February 2009, Cardiff became the first Welsh university - the 28th in the UK - to be occupied by students, outraged that their university invests upwards of £200,000 in BAE Systems and General Electric, two of the world’s biggest arms manufacturers and major suppliers of weapons used to kill Palestinians in the recent Israeli invasion of Gaza.

Following a well-attended ‘books not bombs’ demonstration, thirty students decided to occupy the Shandon lecture theatre opposite the students union where they are now coming to the end of their second day. Despite the annoying presence of university security guards, who are demanding ID from visitors and trying (but failing) to stop food and drink getting in to the lecture theatre, the students’ spirits are high and they’re adamant that the occupation will continue until their demands are met.

Representing a number of different political groupings, the students have been busy spreading the word, contacting and receiving messages of support from the likes of Naom Chomsky and at 2 pm today they were involved in a video link up with Palestinian students from the Jabaliya district of Gaza.

As usual, the Welsh mainstream media don’t seem to give a toss about covering this important action. And perhaps even more surprising is the lack of support from Cardiff university lecturers. Presumably they’ve been shackled by university bosses eager not to let more damaging information such as Cardiff’s £2.5 million military research programme leak out.

The occupation is more than just a stand off between angry students and a badly-behaved university. ‘Aside from the demands, if we’ve made people more aware, and there are lots of apathetic, disinterested students, then it’s worth it,’ said Becky. ‘This is a great transforming experience,’ added Andy. ‘Many of us never thought we could carry out an occupation. Now we’ve done it, we’re thinking what to do next.’


As negotiations proceed, we appeal to all those who are no longer prepared to see our public institutions hand over money to corporations that kill, to do everything they can to support the occupation. Get yourselves down to the Shandon lecture theatre armed with bags of food (veggie/vegan) and drink or send a message. The students need your support.

For more information and the very latest on the occupation contact: 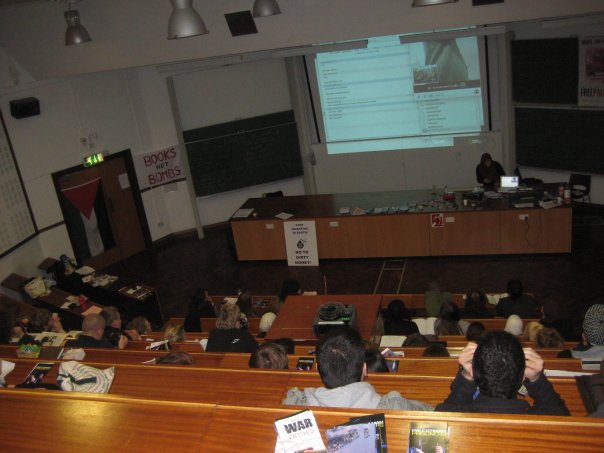 Video link up with students in the Jabaliya district of Gaza