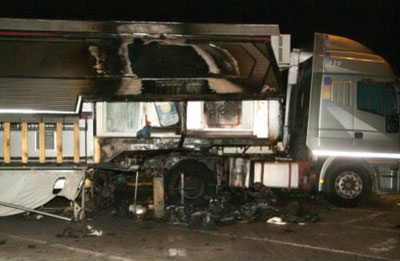 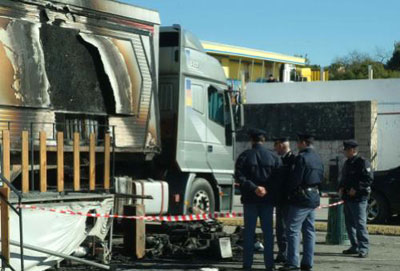 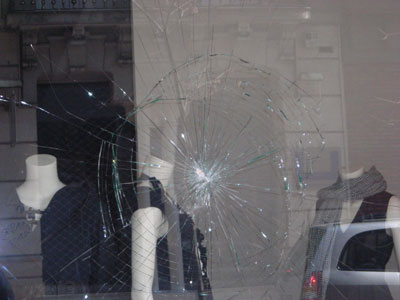 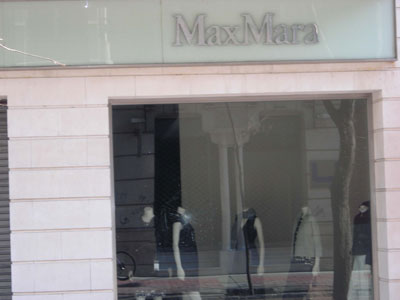 "In the early morning of february the 24th we went back to the Wageningen University in the Netherlands.

And again we were so forgiving. We vandalised 2 expensive Citroen Picasso's belonging to the Wageningen Unversity.
(They had 'University of Wageningen' and their symbols painted all over it, so yeah we are sure)

Because of problems we could only leave half a 'ALF' sign in spray-paint.

Let this be a message to everybody within the university.
STOP YOUR TORTURING NOW, OR WE WILL MAKE YOU STOP!
DO NOT LET YOUR PROPERTY BE THE NEXT VICTIM IN THIS WAR!

February 19. Sassariy, Italy. A Moira Orfei circus truck was badly damaged by fire. Animal activists are suspected of being responsible. Moira Orfei is one of Italy's most famous animal circuses.

"The weekend of 20 to 22 February we decided to say hello to the new MaxMara Collection at a Spanish MaxMara Shop, a brick made the party. The brick was a big hit; we're positive that they will have to replace the window.

MaxMara is directly involved in the fur industry, who kill millions of animals each year. At this moment there is an international campaign against this company, with demos around the world. In particular the Italian activists demonstrate every day their commitment to animals.

For the animals, for those who every day fight for animal liberation.

"Urban expansion is one of the biggest ecological problems, with roads being built over fertile land comes loads of consequences such as pollution, warming of the ground with excessive heat, massive felling of trees, etc. The expansion of civilization and its unnecessary technology leaves the world in the hands of the powerful who control the repressive state apparatus ready to stop any kind of resistance that is put in front of them to halt their run of destruction.

It is for this reason that on the night of February 22 we of the ELF decided to go out at night in Mexico State and set fire to a machine that destroys the earth and a truck owned by the dominators.

We say it once again, there will be no mercy until the abolition of all that oppresses us.

"Monday, February 9 - Fossoli (Modena)
A full moon saw us in action in the mink farm of Rossi Italo in Fossoli.
Some hundred meters away from here are the remains of a concentration camp
from which the prisoners were sent to Auschwitz. The remains of a sad page
in history.
Similar sheds, one after the other, full of prisoners, thousands of them
waiting to be gassed, are a page still open in human history, still
present in Fossoli near the house of Rossi Italo.
Here the victims are mink, but the mentality is the same.
After moving the security camera and smashing the lights which turn on when
someone enters the farm, we removed the metal barrier from the fence, put
on there to prevent the mink from crossing it.
Then we started cutting open hundreds of cages, giving the
prisoner mink a way to get out. Unfortunately we couldn't just open the
cages because of alarms in the sheds, and cutting cages with
bolt cutters was possible only for the breeders in 3 sheds.
We left spraypainted slogans like 'close down this concentration camp also'
and 'ALF'.
Nothing will stop us. Only closing down the farm will give peace to Rossi Italo.
ALF"