I have received the following press release from the Cardiff occupation, which has now ended after three days. They are claiming victory after some of their demands were met.
*Victory for Cardiff Student Occupiers*

The occupation ended at 4pm today with the mass of students walking out
together waving occupation banners and chanting ‘Free, Free, Palestine’. They
then held a ‘Books not Bombs’ rally as they marched around campus declaring
their success.

The victory comes after three days of occupation which has made students
across the campus aware of the £209, 000 worth of shares which, until
yesterday, Cardiff University held in the arms trade. This included BAE
Systems and General Electric who supplied Israel with weapons used in the
recent attacks on Gaza.

The Cardiff Occupation, organised by Cardiff Students Against War, was in
opposition to the University’s investment in the arms trade and to the
atrocities committed in Gaza, where 1.4 million Palestinians are blockaded
in a semi-autonomous apartheid state.

The occupation has been inundated with messages of support including most
notably one from Noam Chomsky:

"I am very pleased to learn about the courageous and honourable actions of
the Cardiff University students. These are particularly significant because
of Britain's role in arms sales generally, and it's contribution to the
savage onslaught on Gaza and on the occupied territories generally, second
only to the decisive role of the United States -- a disgrace for all of us.
I hope you have the greatest success in arousing public opinion and bringing
these crimes to an end."

The action at Cardiff is the twenty-eighth UK student occupation to have
taken place in the last few weeks. This unprecedented wave of student
dissent has seen many university’s capitulating to demands. The Cardiff
activists hope their success will inspire other students to hold occupations
on their own campuses.

Arla Gramper, 22, who took part in the occupation said:

"Our success here at the occupation is a great realisation of what can be
achived by direct action. It’s a starting point upon which we plan to build
larger, wider reaching campaign to engage many more people in the debate and
lobby the university.”

1. For further quotes or information please call 07801140192 to speak to
students who took part in the occupation. Photos available on request.

3. Other demands of the Cardiff Occupation included: Cardiff University to
issue a statement of support for Saudi ex-BAE trade unionist Yahya Al Faifi,
who is currently fighting deportation from the UK. Cardiff Students against
War will continue to actively campaign against Yahya Al Faifi’s deportation.

4. Israel’s attacks on Gaza have led to the deaths of over 1400
Palestinians, including over 400 children, and the injuring of over 5500. It
is now believed that humanitarian and war crimes may have taken place
including the indiscriminate targeting of civilians (including the bombing
academic institutions), the obstruction and targeting of emergency medical
staff and the use of white phosphorus as a weapon.
See the Disasters Emergency Committee website; www.dec.org.uk/

5. The UK arms industry exports billions of pounds worth of weapons every
year, many of these to regimes with poor human rights records, to areas of
conflict or to countries with huge development needs. The arms trade fuels
war and undermines development, including education infrastructure.

6. The occupation was organised by the Disarm Cardiff campaign - an ongoing
campaign run by Cardiff Students Against War.

Film and photos of the end of the Cardiff occupation 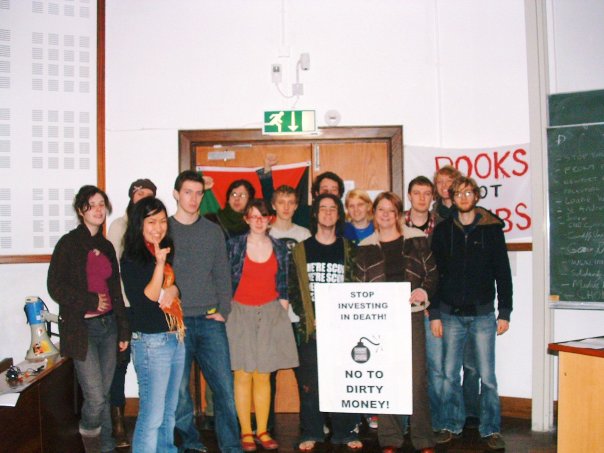 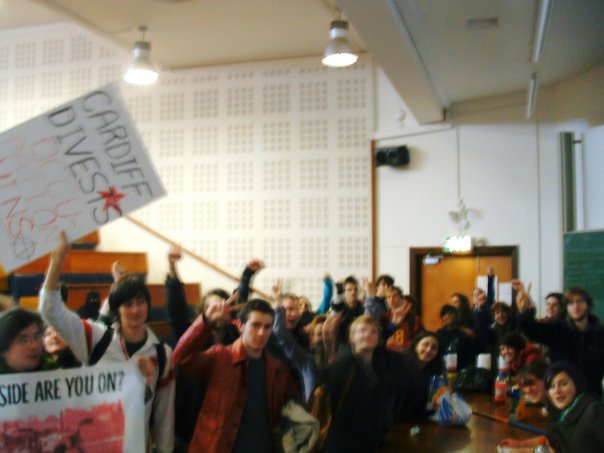 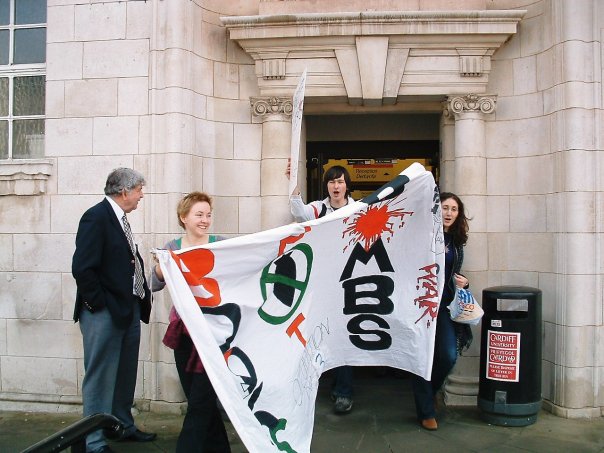 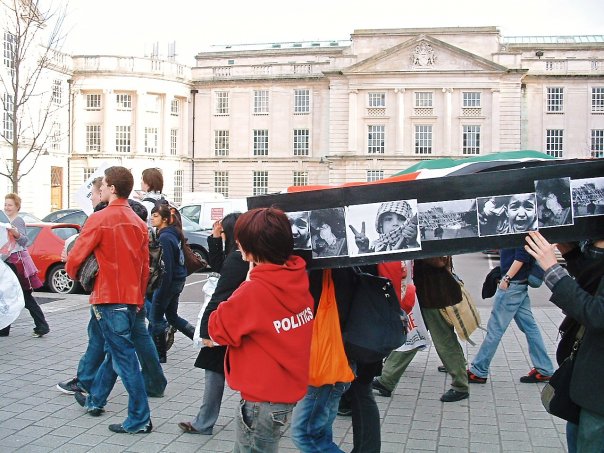 Procession from the main building 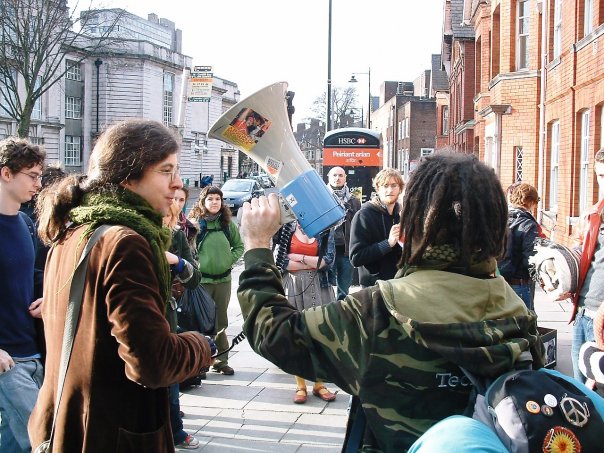 Rally outside union greeted with applause from other students 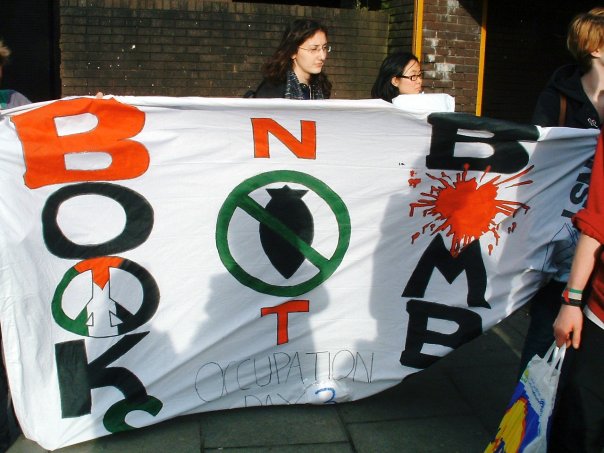 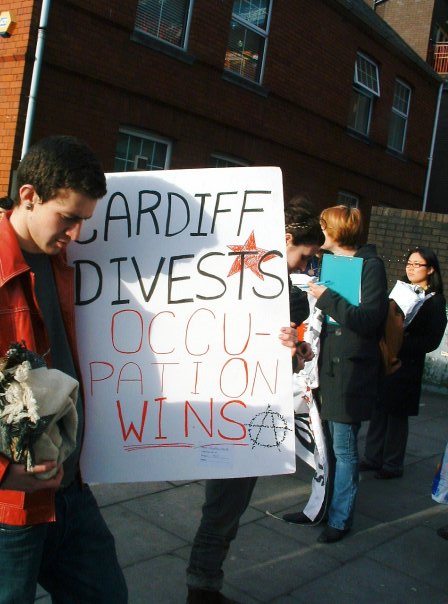 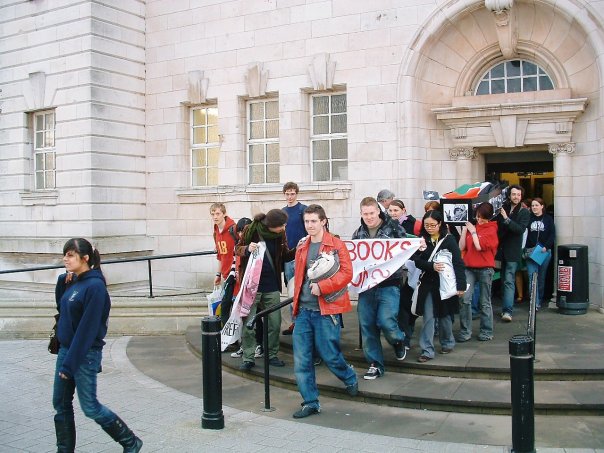 A short film on the occupation:

The student occupiers of Cardiff University have much to feel proud of. For the first time in twenty years the university had to face the power of collective student action.

The Uni’s decision making structures are wholly obtuse – most students have no idea of how to get their Vice Chancellor to even hear their views – let alone affect change based on them.

30 students in the Shandon Lecture Theatre discovered a way though – direct action. Within the first hour of the occupation a pro-VC had already come to begin negotiations with the students, later she engaged in a 45 minute facilitated conversation with all the students in the room and three days after that Cardiff Uni divested from the arms trade, put the DEC banner on the website and have promised to send old PCs, books etc to Gaza – let’s face it as anyone who has ever lobbied the Uni knows petitions and meetings would not have won us that.

But the effectiveness of the occupation was not the only element students should feel proud of – the space they created was also an achievement – hung with brightly coloured banners, filled with cushions and sleeping bags, laughter and music – the Shandon Lecture Theatre was transformed. As one lecturer spluttered upon entering the theatre “Good, God”! An understandable exclamation – gone was the chemistry lecture theatre and in its place was a facilitator of debate, a weaver of resistance and a symbol of hope.

Shandon brought many different kinds of student together for a few wonderful / very fun days.

Yet for all my positive observations of the occupation – I have some negative thoughts to add too. In particular I felt the occupation was marred by the dominant presence of a few non-student members. They were, as far as I could tell SWP organisers and as non-students had no right to be dominating occupation meetings in the way that they did.

Lots of Cardiff folk gave the occupation the practical support it needed to function (Cardiff University Staff, muslim groups, South Wales Anarchists and many other individuals who wanted to show solidarity) but only the SWP felt the need to control the direction of the occupation.

It is my hope that the occupation has demonstrated the power of collective student action, we should certainly work with other activists to achieve our aims, but must not let them control our movement.