Another climate rush occured last night at the Landmark hotel at Marylebone. Around 100 protesters rushed into the hotel where the annual coal awards (yes, really) were meant to be taking place. In the light of the seriousness of climate change it was propably a bit of a PR own goal for the coal industry to be celebrating the dirtiest fuel on the planet. An alternative awards ceremony took place with more apropriate catagories.... 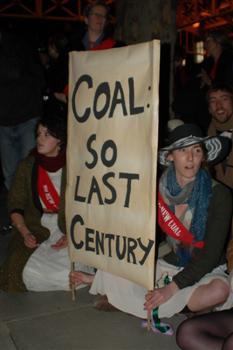 Direct and to the point 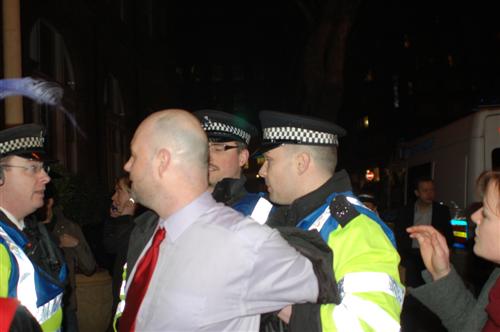 Arrested by fashion police for wearing a polyester tie 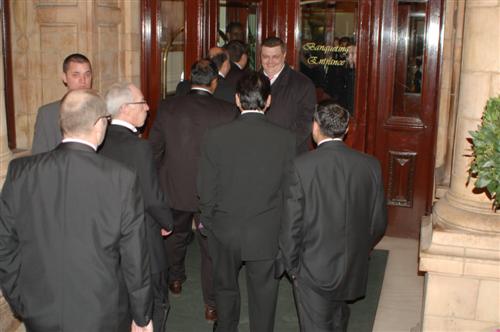 Delegates for a conference enter hotel 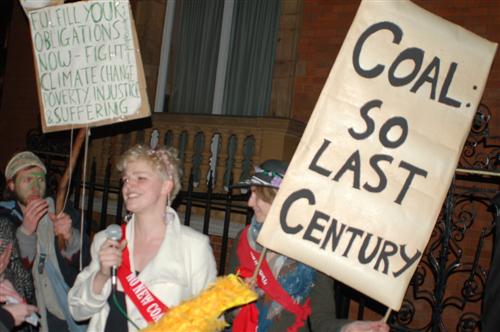 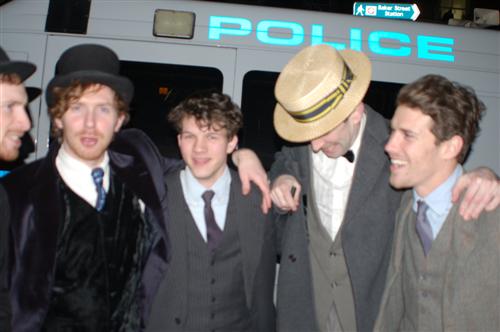 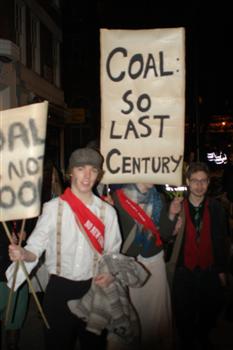 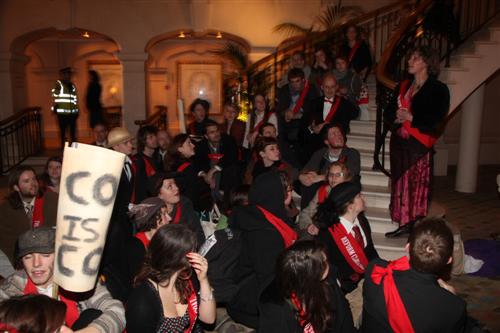 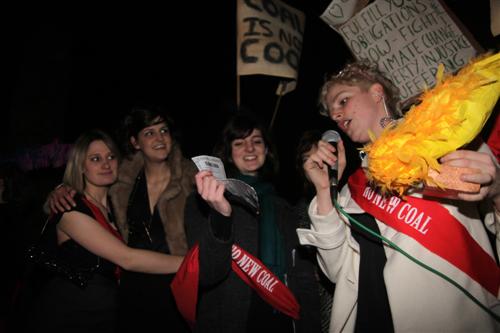 And the Financial Fools award goes to... (c) http://www.ameliasmagazine.com/

Climate Rush is delighted to announce that it will be presenting the following "Canary in the Coalmine" awards:

Science Fiction award
goes to the most unbelievable technology not yet available to stop CO2 emissions, Carbon Capture and Storage.

Financial Fool award
goes to the Royal Bank of Scotland, for helping to raise $16 billion in loans to finance the worldwide coal industry over the past two years.

LIfetime Achievement award
goes to Drax coal fired power station, for the Greatest Emissions in the UK, equivalent to that of the 54 poorest countries in the world.

UK Coal Personality of the Year
goes to Paul Golby, CEO of energy company E.ON, for outstanding services to Greenwash (whilst plotting to build Kingsnorth)

A top class London hotel has vowed companies and organisations which
contribute to climate chaos will no longer be welcome to use their
facilities for corporate promotion and entertainment
The move follows a Climate Rush action on the Landmark Hotel in
Marylebone, where hundreds of protestors converged on Thursday to halt a
coal industry awards ceremony.
Coal is acknowledged among scientists and climate change activists as the
world’s worst contributor to climate change in the form of CO2 emissions.*
The coal industry under the banner of UK Coal were booked into the
Landmark to host an awards ceremony with five star food and drink where
they planned to hand out gongs for UK coal personality of the year and the
best open cast minors among other categories.
Protesters dropped banners and staged a peaceful sit-in to speak out at
the hotel’s support and the coal industry’s insistance of “business as
usual” in the face of evident escalating climate chaos.
The Landmark’s landmark decision has been applauded by activists. “At
Last! For too long profiteering from climate change has been sold to the
public as a necessity of ‘business as usual’. But with global temperatures
rising and climate chaos running riot in the form of drought (Africa and
Australia) and flooding (low lying lands all over), we all need to work
together.
“ We applaud the Landmark for their good sense and the vision to say
‘enough is enough’. They rightly don’t want to be associated with the
corrupt system that needs overturning. We welcome the Landmark to play
their role in the new way of doing things so needed.”
The Landmark now plans to deny companies such as the Royal Bank of
Scotland (the biggest single investor in coal and oil industries) and oil
companies, such as ESSO, BP and Shell, as well as the coal industry from
using their ballrooms and banquet halls to promote their cause.
The hotel has also pledge to communicate with the 24 other five star
hotels in its’ group to suggest they do the same.
Climate Rush has pledged to work with the Landmark Hotel to ensure the
right companies are blocked, to send a clear message to polluters: they’re
not welcome.

ENDS
Notes and footnotes to Editors
Coal is responsible for 50 % of the climate change gases in the atmosphere
caused by human activity.
Climate Rush is a cutting edge movement of carbon cutting individuals who
have seen the light and want to spread the word through their remit: Deeds
not words, based on the clarion call of the suffragettes