3rd March - Nine young protesters from the climate action group Plane Stupid Scotland have this morning shut down Aberdeen airport by setting up a golf course on the taxiway. They have surrounded themselves with fortified security fencing whilst another group are occupying the roof of the terminal building and have unfurled a banner reading, “Nae Trump Games with Climate Change”. 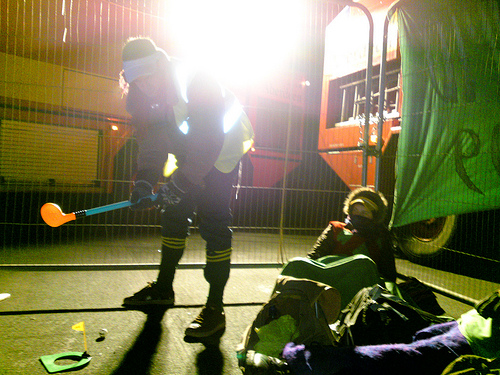 3rd March - Nine young protesters from the climate action group Plane Stupid Scotland have this morning shut down Aberdeen airport by setting up a golf course on the taxiway. They have surrounded themselves with fortified security fencing whilst another group are occupying the roof of the terminal building and have unfurled a banner reading, “Nae Trump Games with Climate Change”.

The peaceful protest began at 02.15am this morning whilst the runway was closed. Plane Stupid aims to prevent the scheduled reopening of the runway at 5am. The group intends to maintain its blockade for as long as possible to prevent the release of thousands of tonnes of greenhouse gas emissions into the atmosphere.

The activists entered the runway by cutting the fence and scaled the roof climbing ladders. Dressed as Donald Trump, sporting wigs and golfing attire, with crazy golf clubs and balls, the group are ‘putting’ on the tarmac. The banner on the fencing erected by the group reads “Plane Stupid Scotland Golf Open 2009”.

One of the activists on the taxiway, Jonny Agnew, 22, from Edinburgh, said:

“We have been failed by the generation of Donald Trump and Alex Salmond. Despite a catalogue of scientific reports warning them that they can’t keep on with aviation growth – even if that hinders their ability to jet in for a weekend of golf – they continue with disregard for all of us, who will end up dealing with the impacts of the climate crisis.”

“The reality is that our generation’s future is vanishing so that people like Donald Trump and his super-rich friends can jet into Aberdeen for a round of golf. The expansion of this airport just cannot go ahead."

“Alex Salmond wants to let the Spanish shareholders of BAA, Donald Trump and his super-rich American friends concrete over Scotland and its efforts to stop runaway climate change.”

“Arctic ice is melting, the sea is already rising and experts warn the world’s rainforests could collapse. Our generation is already starting to feel these impacts as the warming kicks in so it’s obvious that it’s going to need to be us that urgently puts the brakes on expanding unnecessary airports.”

The campaigners chose to close Aberdeen after the Scottish government gave its backing to the expansion of capacity at the airport by 1.5 million passengers by 2015. Aviation is Britain's fastest growing source of emissions, already amounting to at least 13% of the UK's climate emissions.

With plans in the Scottish government’s ‘National Planning Framework’ for growth at Scottish airports including Glasgow, Edinburgh and Aberdeen - as well as Heathrow and Stansted - experts from the Tyndall Centre for climate research say aviation policy alone will scupper any chance the UK has of hitting its climate targets.

“We’re here to say it cannot happen, and our generation won’t let it happen. The scientists tell us we've got seven years to make emissions peak then drop, and if we fail, the people on this runway and their entire generation, and our children, willl live with the consequences. That's why we’re doing this.”