100 billionaires will meet at the Dorchester Hotel tonight to demand more tax cuts for themselves, and control of the UK's aid budget. Lets give them a warm welcome! 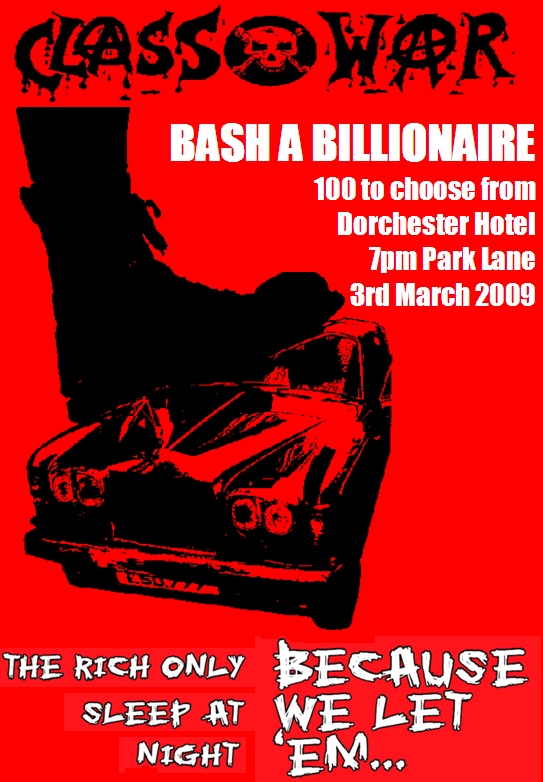 Bash a Billionaire, Burn a Banker

"On Tuesday night, 100 billionaires will gather at London's sumptuous Dorchester hotel, to watch Mr Ted Turner in conversation with Ms Carol Vorderman. Ms Joss Stone will sing, and some model or other will be in attendance. Can you guess the aim of this evening, which I trust you would cross continents to avoid in the infinitely unlikely event that you had been invited? No? Then allow me to assist. The aim is to make the government give tax breaks to the super-rich, in order to tempt them to give the same percentage of income to charity as the poorest 20% of people in this country already do."

"But it is the Fortune Forum's latest scheme that really impresses. As the Guardian reported yesterday, Mehta enlisted the Nobel prize winning economist Sir James Mirrlees to come up with a plan to address the shaming statistic that Britain's richest 20% donate 0.8% of their income to charity, while the poorest 20% give 3%. He duly concocted a tax proposal. To wit: 50% of money donated towards the UN's millennium development goals through this scheme would be deducted from an individual or corporation's tax liability (which is of course only 40% or 28% respectively), with the government making up the other 50% from its aid budget. Naturally, the super-rich donors would get to decide on what projects their money was spent."

"Let's see that in action, shall we? The UK's total overseas aid budget was £4.9bn in 2007-2008. Mehta suggests her scheme could persuade the super-rich to part with an extra £5bn a year, but of course the government is required to backmatch that notional sum, meaning that the entire aid budget would be swallowed up. What this means, effectively, is that control over the UK's aid budget would pass from the Department for International Development to a bunch of private individuals."