We Are An Image From The Future

On Saturday 28h February 2009, a special event was hosted at The Common Place social centre in Leeds, UK. Arising from a need to assess the global economic crisis from a radical perspective whilst making links to local affairs, this meeting was arranged by the tentatively named "We Won't Pay For Their Crisis" group. It featured speakers from Leeds, Greece, Iceland and Italy as well as an open discussion, an authentic Greek vegan meal, screening of "The Potentiality of Storming Heaven" and performances from three of Yorkshire's finest DIY bands (original publicity material here). 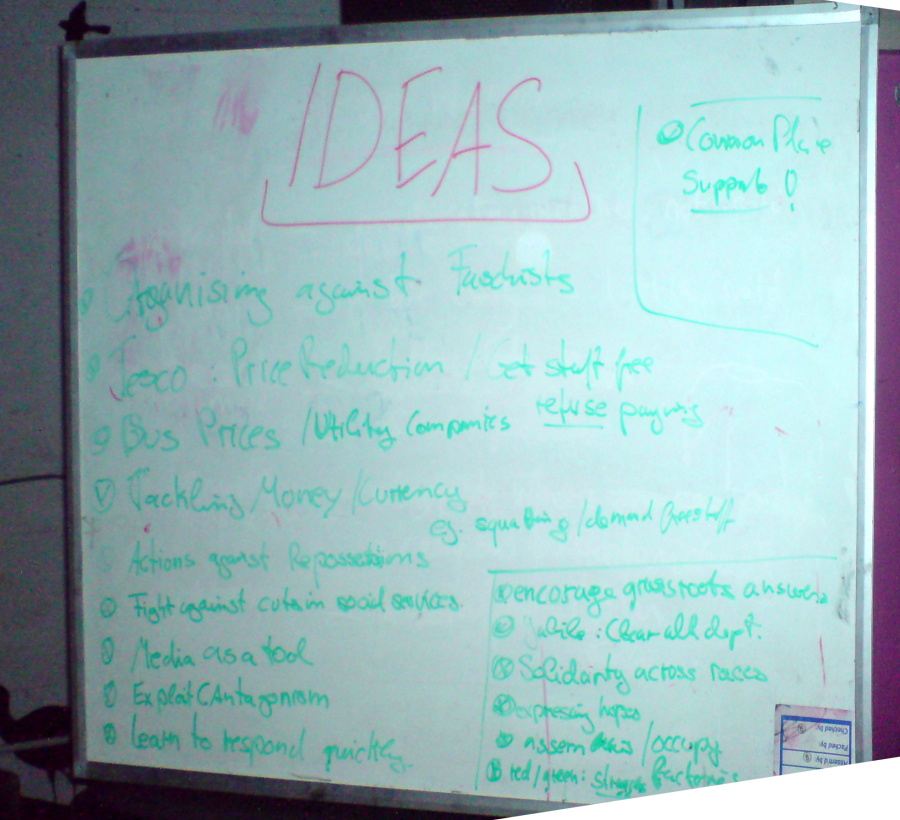 As well as providing an opportunity to learn and discuss recent events and a Greek-themed cultural forum, there was a vector towards future intervention. The event itself functioned as a fund-raiser, splitting the proceeds between a fund for the support of the prisoners taken during the recent uprising in Greece, support for Konstantina Kuneva and support for The Common Place.

This article is accompanied by audio recordings of the speakers. The reader is advised to listen to these before reading the notes that follow, which summarise the speakers and the unrecorded discussions. [Technical note - the recordings are presented in two alternative formats, ogg and mp3. The first 5 files in the list above comprise the entire recording in the preferred ogg format. The last two in the list comprise the entire recording in the deprecated mp3 format.]

The first speaker explained how this meeting had come about. The organisers had been meeting as a local group and trying to find appropriate political responses to the economic crisis, hence the name We Won't Pay For Their Crisis. We were inspired by the responses of anarchist groups in other parts of the world- by responses to government arrogance in the face of capital flight as in Iceland, by responses to spending cuts in education in Italy, by responses to escalating repression, xenophobia and state corruption in Greece. These events were all linked by being manifestation of state responses to the collapse of neoliberalism. In each case, ordinary people had risen up to assert that we won't carry the burden of the failure of an economic system that we've long since denounced and fought against.

We considered the problem posed by the speed at which the crisis evolved. In Leeds, we had been thinking about a price reduction campaign but this was difficult to follow through for at least two reasons - some people thought it irresponsible to be demanding cheaper food because of the impact this would have on farmers for example, and before we could resolve this we'd found ourselves faced with deflation. We had felt ourselves caught in a change of historical epoch, trying to find ways to reterritorialize before opportunities slip away.

Our guest from Greece spoke briefly about two examples of how Greece had changes since the uprising - he spoke again later with a more personal account of the events of December 2008. One thing that had changed was the way in which a huge solidarity mobilisation had been possible after the attach on Konstantina Kuneva. A march of at least 10,000 people happened, whereas before the uprising there would have been a tenth of this number. When people were dissatisfied by the response of the reformist trade unions, they occupied the unions' head quarters. When betrayed by the corporate media, their buildings had been targeted too.

The other aspect of change since the uprising is the increased brutality of attacks against 'left' targets. In the example described, a far-right group had attempted to throw a hand grenade into a meeting of conscientious objectors at a social centre. The attack failed but would have killed about 40 people.

From Iceland, we heard how the government had been brought down as the nation slipped from being the fourth richest in the world into chaos. Notably, Britain is similar to Iceland in its heavy reliance on the financial services sector for income, so the possibility of a similar financial collapse here seems to be at least plausible - so how can we accelerate it? How can we push the capitalist beast into the abyss before it mutates into something uglier still?

The threat facing Iceland now is that the interim 'leftist' government may be replace by remnants if the old regime. If this happens, it is possible that they would seek recapitalisation from the IMF who would undoubtedly demand a massive increase in exploitation of oil, aluminium and hydroelectric power with disastrous results for the wilderness.

In Italy, the Anomalous Wave has been struggling against 'fascist' gangs, most of whom are children. There has been much tension around educational institutions. As in Greece and Iceland, the corporate media have grossly misrepresented the situation to the detriment of the left. The situation is similar to the 'strategy of tension' used by the CIA in the 1970s.

In the discussion that followed (no audio recorded), many people expressed concern that the resurgence of the far-right seems to be causing problems across Europe. Some thought that this represented a familiar and unitary 'opponent', others that something new is happening with increased ferocity of attacks and (more) widespread police complicity.

Somebody thought that a campaign in Leeds against train fare increases had been misconceived because 'working class' people tend to use buses. We went on to discuss some more constructive ideas about actions. Would it be possible to gather outside supermarkets and decide how much we would pay for our food? Would we be able to start 'neighbourhood assemblies', at which we could take control of our collective lives bypassing our elected representatives? Or should we mobilise to bring down this government, incumbent as it was through the evolution of the current crisis? As a lever for this should we demand a jubilee, a universal annulment of debt?

Amongst the challenges ahead is the need to transcend the apparent clash of Red and Green struggles. We spoke of developing the resilience of our communities through local food production and the urgency of a just transition to a low-carbon economy. But how can there be any sort of economy, carbonated or 'sin gas', when the entire basis of valorisation is in doubt? These questions needs further exploration but the ground has been prepared. The opportunity for intervention, the fulcrum to pull future history in our direction, needs to be found before a new monster evolves to replace the old.

After dinner, our Greek speaker gave a moving personal account of the uprising that I will not attempt to summarise. Listen for yourself. Then we watched The Potentiality of Storming Heaven, a film combining photo reportage, news captions and poetic ejaculations to music.

The next meeting of We Won't Pay For Their Crisis is at 8pm on Wednesday, March 11th at The Common Place, Leeds.