stroke of 1pm yesterday, 5 March, at the large Bishopsgate HQ offices of the RBS in London to demonstrate against ridiculous pension payouts and their funding of climate chaos. Photographs Copyright (C) 2009, Peter Marshall, all rights reserved. 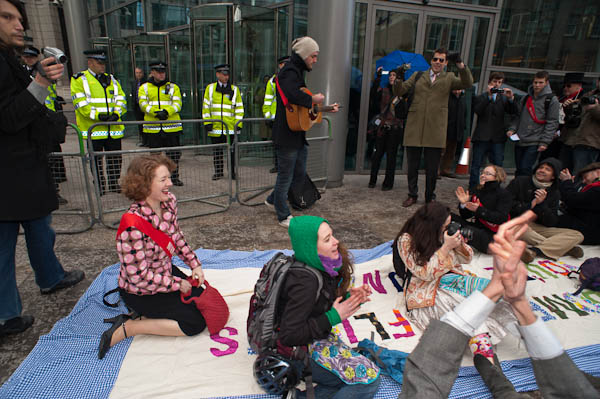 Sitting down for a picnic at RBS 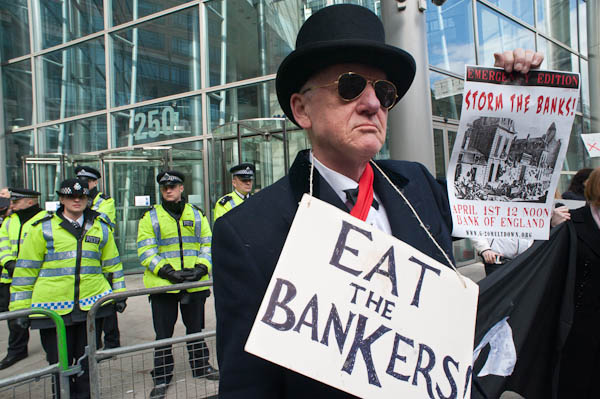 Only the Evening Standard will take this literally 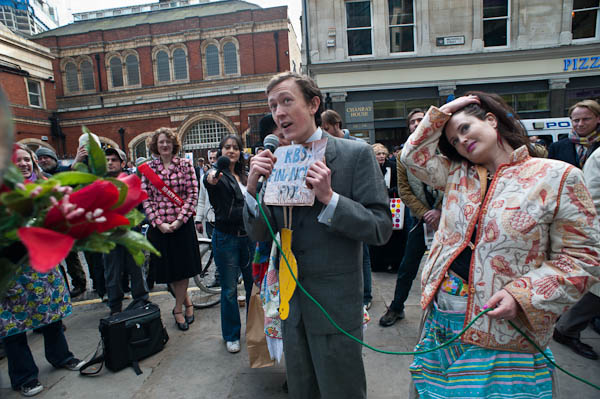 Accepting the Financial Fool Award on behalf of the RBS 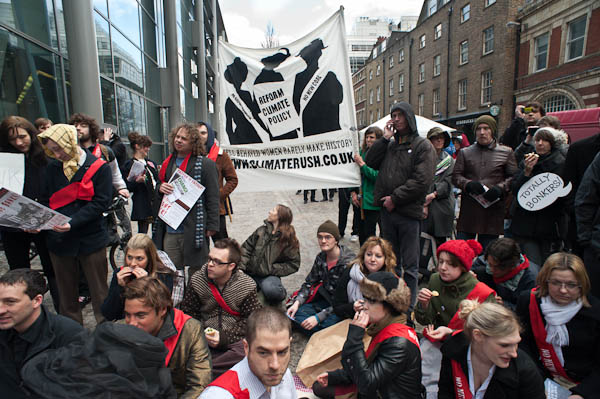 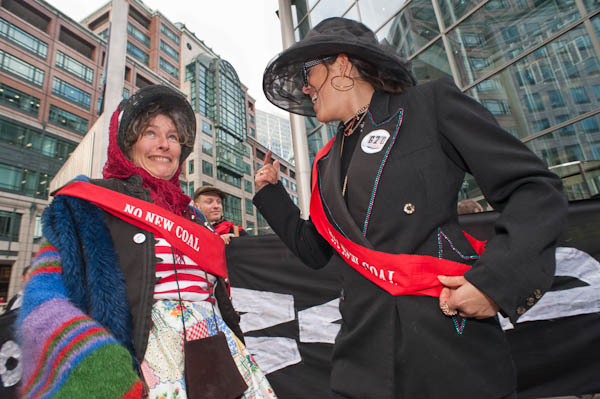 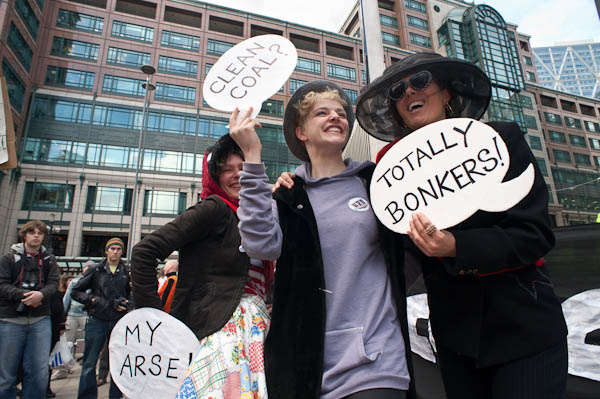 One consequence of the government's rescue of the banks is that it is now public money, our money, that is backing hugely polluting schemes such as the building of a coal fired power stations at Kingsnorth. As we were reminded in one of a number of short speeches outside the RBS HQ in Bishopsgate, this power station will produce as much carbon dioxide on its own as the total industrial output from some countries.

The pension payout to its former boss Sir Fred Goodwin for bravely leading the RBS into bankruptcy guaranteed that the action would have wide public support - and probably from most of the RBS staff too. But though most would like to see Sir Fred stripped of pension, knighthood and locked up for life for his crimes (if not some more suitably severe treatment) this was also an opportunity to remind people of his and the banking system's crimes against the planet.

Although the Climate Rush at the RBS was a fun affair like other events they have organised, its purpose is deeply serious, something that seems to be lost on some of the more dinosauric Indymedia armchair comment-makers. Protests like this are successful because of the media interest they attract, which draws some public attention to the issues involved (if sometimes despite the efforts of mainstream reporters.)

As well as the crowd of media, it was also closely watched by many of the RBS employees, who cannot have failed to see the point of the protest which they were being entertained by. Many walked in past a very large banner saying 'No New Coal Awards' which was stretched out in front of the barriers around the whole entrance area which was full of security men and police. Similar messages of course appeared on sashes and on placards, and there was a crowd watching from inside the atrium all the time I was there.

As well as the speeches there was some singing as well as music from a bike-hauled sound system which inspired some lively dancing. I was sorry that I had to rush off before the end to support the office cleaners who were demonstrating outside the Willis building at the same time.

You can download your own copy of the poster that was distributed at the event - you can see people holding them in some of my pictures - for 'Storm the Banks' coming up on April 1st at the Bank of England from the G20 meltdown site,

http://www.g-20meltdown.org/ - they are also available from Freedom Bookshop.

The G20 protest will start at 11am with four carnival parades, each led by one of the Four Horsemen of the Apocalypse from a railway station - from Moorgate the Red horse against War, iverpool St Green the horse against Climate chaos, London Bridge the Silver horse against Financial crimes and from Cannon Street the Black horse against land enclosures and borders and honouring the 360th full circle anniversary of the Diggers. The parades wil converge on the Bank of England for 'Storm the Banks' at 12 noon. And then at 1pm there's the Climate Camp at the European Carbon Exchange, Hasilwood House, 62 Bishopsgate, EC2N 4AW. It should be an interesting day.

More pictures from the RBS Climnate Rush on My London Diary shortly: