On Tuesday 24th February 2009, 40 students from the University of Manchester confiscated the entire recruitment stall for Defence Science and Technology Laboratory (DSTL) – a Ministry of Defence organisation, including the backing display board. The students wore high-vis jackets with the words 'UMSU Health and Safety Inspectors' written on the back. 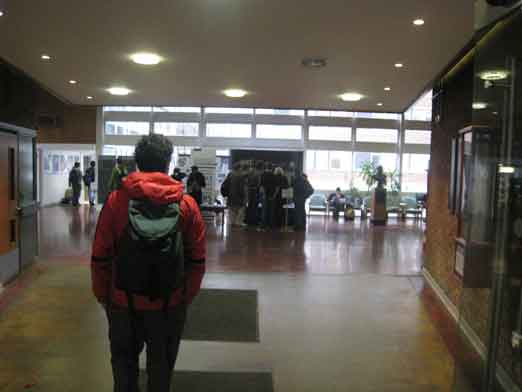 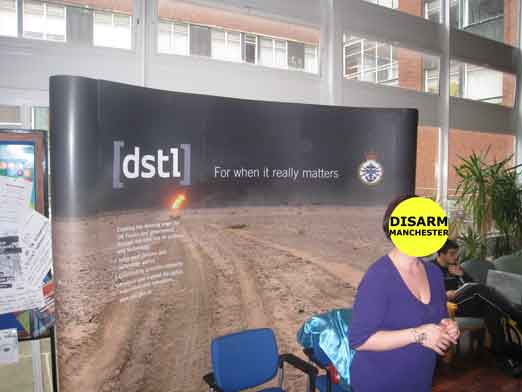 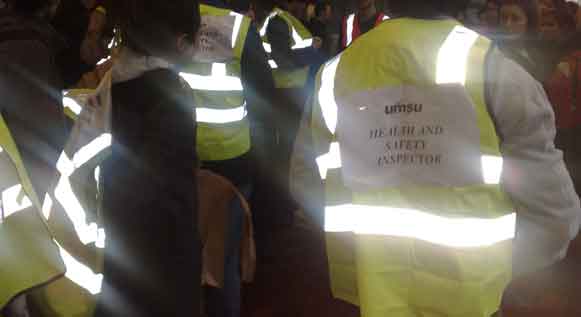 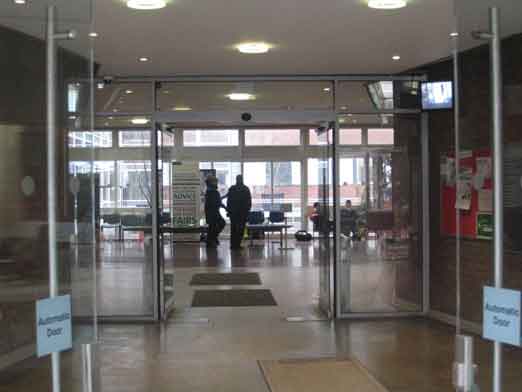 At approximately 1.15pm, around 40 students from the group ‘Disarm Manchester’ peacefully confiscated all the DSTL recruitment stall materials from the foyer of the Schuster Building at the University of Manchester, including the organisation's leaflets and the backing display board.

The group were protesting against the presence of the arms industry on campus. Part of the role of DSTL is to evaluate the arms procurement by the MoD, and to research weaponry.

According to one protester who spoke to a University representative before the demonstration, BAE Systems had been due to put on a stall as well, but pulled out before the event.

The group then returned to the Student Union building where they deposited the materials.

University security however, apprehended two students at the doors of the Student Union as they were leaving.  They were detained whilst police were called.  The remainder of the group then de-arrested the detained students.  A small kerfuffle broke out but the group quickly dispersed once the detained students had been freed.
One postgraduate Politics student from the group said, "It is difficult for me, as a student who has studied conflicts, to stand idly by whilst the arms trade touts its business on our doorstep.  We have now sent them a clear message that they are not welcome on campus. The arms industry doesn’t solve conflicts around the world, it proliferates them.”

One member of the Student Union Executive said “I think the fact that BAE pulled out earlier in the day shows that, as students, we are already having some success in challenging the presence of the arms industry on campus. However, we are fully aware that there is more work to be done in helping the University to make the transition away from the real problem, which is research in military weaponry.”

The University of Manchester Students Union (UMSU) has regularly passed policy through their democratic decision making bodies to campaign against the arms trade. The Union passed policy on 15th February 2006 and when this policy expired three years later, UMSU Council passed a directive to continue this campaign.

A recent motion on the Gaza Crisis, which was passed at an Emergency General Meeting on 11th February 2009 with over 1000 students in attendance also included a clause denouncing the University’s involvement with the arms trade. (www.umsu.manchester.ac.uk/your_union/policy)

Another protester from Disarm Manchester, said, “As a physics student, I am dismayed that one of the major options available to me as a graduate is to work in unethical industries such as the arms trade.”

DSTL was formerly part of the government’s Defence Evaluation Research Agency (DERA).  When this agency was mostly privatised in 2002, some of their operations deemed sensitive, such as chemical and biological warfare knowledge remained ‘in house’.  This part of their operations became Defence Science and Technology Laboratory (DSTL).  The remainder of DERA was sold to the Carlyle Group.  Former prime minister John Major has served as the European Director of the Carlyle group.

Students at Manchester have staged a number of die-ins against the University’s investments in the arms trade in 2005 and 2006.

A Rebel Clown Army protest also embarrassed the university about their arms trade investment in front of prospective students at their postgraduate open day in November 2007.

In another protest in 2008, students invited themselves to a University Finance Committee meeting in order to discuss the issue directly with University management.

Prior to this DSTL protest, the University recently adopted an Ethical Investments Policy as a result of student campaigning. Following this, the University Finance committee disinvested from two arms companies deemed to be in contradiction to this policy. However, the University has not yet released the names of these arms companies. This is because the firm who manages some of the University's investments provided information recommending divestment on the condition that this information was not publicly disclosed, for fear of legal action. Student campaigners are currently working on other ways to make the names of these companies publicly available.

One Manchester student said, “The University has had to be dragged kicking and screaming to the table of transparency. But we are getting there slowly.”