The damage done by the complete capitulation of many progressives to Barack Obama is now bearing fruit. He is able to dismiss them and his own party without suffering any political damage.

Obama proves that there is only one political party in this country when foreign policy decisions are being made. George W. Bush may no longer be in the White House, but because of capitulation to the Obama administration, his grand plan for endless war will be a reality for a very long time to come. 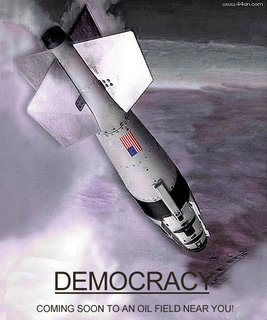 Why are more Republicans happy with Obama's policies on government secrecy, wiretapping, non-withdrawal from Iraq, unqualified support for Israel and a host of other policies than most of the Democratic party's own base? What do they know that many of us don't, or perhaps do not wish to know?

If John McCain and other Republicans are happy about an Obama administration initiative and Democrats are not, it is safe to say that something very bad is taking place. That something is Obama’s announcement that he will continue the occupation of Iraq indefinitely.

Of course, the president didn’t actually use any of those words. In a speech delivered at Camp Lejeune in North Carolina, President Obama announced, “…by August 31, 2010 our combat mission in Iraq will end.”

As always, the president chose his words very carefully. The parsing was so clever that it fooled many people into celebrating when there is no reason for joy. There will still be American troops in Iraq, up to 50,000 of them. “As I have long said, we will retain a transitional force to carry out three distinct functions: training, equipping, and advising Iraqi Security Forces as long as they remain non-sectarian; conducting targeted counter-terrorism missions; and protecting our ongoing civilian and military efforts within Iraq. Initially, this force will likely be made up of 35-50,000 U.S. troops.”

It isn’t clear how “conducting targeted counter-terrorism missions” will not be considered combat. Congressman Dennis Kucinich pointed out the obvious problem with the president’s words. “You cannot leave combat troops in a foreign country to conduct combat operations and call it the end of the war. You can’t be in and out at the same time.”

“Obama never expressed any intention of fully withdrawing from Iraq.”

Obama’s one time political rival, Republican senator John McCain, was extremely pleased with the president’s timetable and with the level of troop commitment. “I believe that the administration should aim to keep the full complement – 50,000, as briefed by Secretary Gates and Admiral Mullen – and not succumb to pressures, political or otherwise, to make deeper or faster cuts in our force levels.” While McCain and other Republicans waxed enthusiastically, Congressional Democrats such as Nancy Pelosi and Charles Schumer, who are not known for progressive politics, expressed concern about the number of troops scheduled to remain in Iraq.

While Democrats openly questioned the president’s policy, Republicans were enthusiastic supporters. During the presidential campaign John McCain was excoriated by Democrats when he said the United States should continue its presence in Iraq for 100 years. It was easy to sneer at the hapless McCain, but the Obama plan could lead to an American presence that may not last 100 years, but for a very long time nonetheless. The snickering directed at McCain should also have been directed at Obama, who never expressed any intention of fully withdrawing from Iraq.

His statement at Camp Lejeune was a repetition of his words on the stump as a presidential candidate. He reminded his foolishly smitten yet now disappointed supporters that he was an anti-war candidate only in their dreams. “Well, what I would say that is that they maybe weren't paying attention to what I said during the campaign.”

The damage done by the complete capitulation of many progressives to Obama is now bearing fruit. He is able to dismiss them and his own party without suffering any political damage. He said as much in a PBS interview with Jim Lehrer.

JIM LEHRER: You're not the least bit uneasy over the fact as John McCain and John Boehner, the Republican leader of the House, have praised your plan while the Democrats are criticizing it?

“Many more will die in the name of fighting terror.”

Dennis Kucinich, among those who can be ignored, made another important point about the Obama plan. “We must bring a conclusion to this sorry chapter in American history where war was waged under false pretense against an innocent people. Taking troops out of Iraq should not mean more troops available for deployment in other operations.”

The other operation is of course in Afghanistan, where an additional 17,000 troops are headed. Afghanistan is also under occupation, its civilian population is the target of U.S. military action that has killed thousands of human beings. Many more will die in the name of fighting terror, and to benefit the same corporations that will turn their country into another cash cow for war profiteers.

Barack Obama proves that there is only one political party in this country when foreign policy decisions are being made. George W. Bush may no longer be in the White House, but because of capitulation to the Obama administration, his grand plan for endless war will be a reality for a very long time to come.